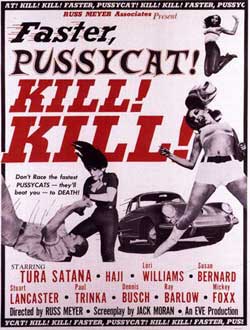 The life of a go go dancer can get pretty boring at times. That’s why God created sports cars, alcohol and drag racing after all isn’t it? After committing a murder three go go dancers hit the road with a hostage and discover an independently rich elderly man and his two sons. Can the three girls get away with the murder, the hostage and the money?

Review: “I’m of legal age for whiskey, voting and loving. Now the next election is two years away, and my love life ain’t getting much better, so how about some of that one-hundred-percent!”

Faster, Pussycat! Kill! Kill! Was directed by Russ Meyer, a man who became notorious for his sexploitation films in the 1960’s through the 1970’s. It also stars Tura Satana as the bad bitch in black Varla. Tura Satana’s own back story is the type of life that mirrors the same kind of exploitation films she would become famous for. 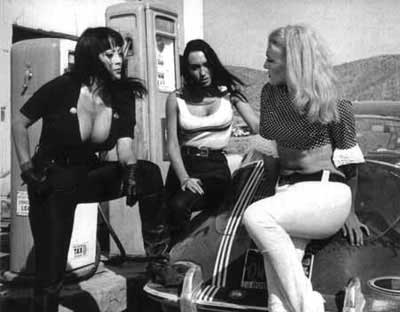 The movie starts off of course with our three go go dancers going at it for their last dance of the shift. The men who are watching them start to get more and more excited as the dance goes on, they begin screaming commands at the women whose faces look like they are somewhere else. Our three ladies are of course Varla (obviously the leader and the toughest of the group), Rosie (the exotic one) and Billie (the sex kitten). 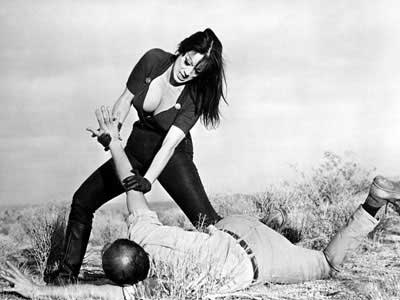 After our dance sequence we are treated to a shot of the three ladies each driving their own sports car on what looks like an empty road. After a while the girls pull over and Billie immediately jumps into a small lake. Varla sends Rosie to go get her and we are treated to a fight sequence that starts in the water and makes its way onto land. All throughout this beginning sequence and the entire film we are treated to some extremely campy dialogue by the women. Did I say campy, I really meant to say fantastic. Lines like “You really should be AM and FM. You one-band broads are a drag!” and “Oh, you’re cute… like a velvet glove cast in iron.” both of those lines of course are spoken by Billie in different parts of the film.

After the brief fight sequence Varla starts to calm her girls down. Billie immediately goes right into her go go routine right there in the middle of the road. When Rosie asks if she ever gets tired, Billie informs her that she’s always on and always looking for new moves to add to her routine.

While Billie dances a car pulls up. Inside the car are amateur drag racer Tommy and his scantily clad girlfriend Linda. Tommy asks the girls if they mind if he times his car on the stretch of road, Varla is far from impressed. You see Varla doesn’t race clocks; she races people, and to her Tommy is a poser. Tommy goes to run the strip of road and Linda forgets to time him, she has a problem of talking….way to much. When Tommy comes back up to the group he feels good, he feels like he might have broken his record. Varla still isn’t impressed, she challenges Tommy to a race and Tommy reluctantly accepts.

The three go go dancers and the wannabe drag racer all get into their cars with young Linda as the starter. As they drive around Varla shows why she is the leader of the group, she runs Tommy’s car off of the road. As they finish the race Linda begins to argue with Varla about her methods and Varla swipes Tommy’s stopwatch out of Linda’s hand. If he wants his stopwatch (that he won) back, he has to win it back. As Tommy tries to take the watch a fight breaks out. The fight sequences in Faster, Pussycat! Kill! Kill! are wonderful, not just in the actual choreography but also the sound effects, you get to hear every painful slap. 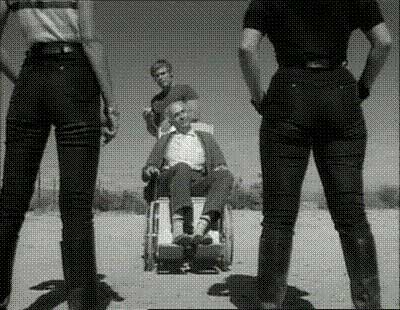 Tommy gets Varla to the ground and begins making his way back to the group when suddenly Varla is right back onto her feet. She runs up behind and Tommy and strikes him again. Their fighting escalates until finally Varla kills him with a blow from behind. Linda begins to scream, as anyone in that kind of situation would do, but she is soon subdued. Varla instructs her go go dancer posse to put Tommy’s body in his car, they are instructed to make it look like he was in a bad wreck and of course died in the crash.

Varla then puts Linda in her car with her while Billie and Rosie follow behind in their own cars. When they pull over to gas up they are of course sexually harassed by the attendant. That’s when Billie sees a “hunk of a man”, she is immediately interested in him and the gas station attendant is more than happy to share what information he knows with the girls. You see that hunk of a man is known as the vegetable apparently his muscles are the substitute for any real brain power, his father is a crippled man in a wheelchair (with a genuine hatred and fear of trains). There is also another brother in the family named Kirk. Kirk seems to be the only normal member of this family and the one who keeps it all together.

The gas station attendant tells the girls that the “old man” is probably the richest man in the area. He has all kinds of money, but no one knows where it is stashed. Varla’s eyes show what she is thinking before she even says it. She wants that money. The girls then hop in their cars and begin to follow the family back to their house. There is a problem though for the go go dancers, you see this family has secrets of its own and sometimes you just don’t want to find things like that out. 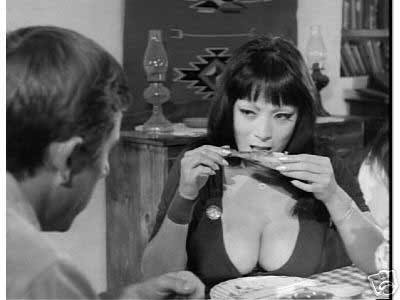 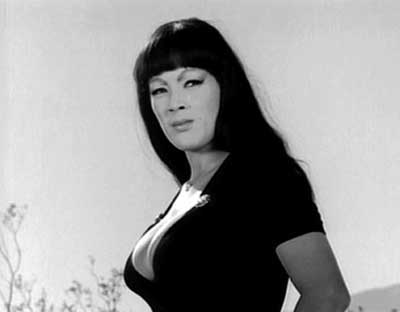 Faster, Pussycat! Kill! Kill! is a fantastic piece of early sexploitation, although there is hardly any nudity, it still oozes with sleaze and sex. Tura’s performance as Varla made her a sex symbol for generations to come, and proved that a full figured woman could be sexy.

Like I said earlier in this review the dialogue of this movie is great, there are so many quotes throughout the whole film, and obviously Rob Zombie was a fan samples from this film were found on several White Zombie songs, the most well known example is of course Thunder Kiss ’65.

The film also treads on familiar territory; years before we had Tobe Hooper direct the original Texas Chainsaw Massacre, we had the dinner scene in which our four go go dancers and hostage eat a dinner with the strange family. Strange family in a rural area, damn that sounds familiar too doesn’t it. 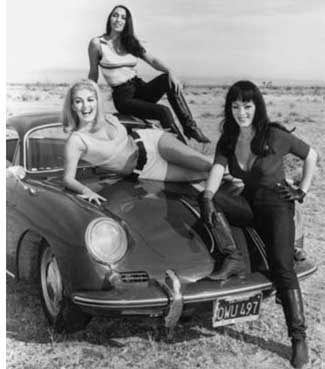 Faster, Pussycat! Kill! Kill! is exactly what you think it is going to be from the title, and let me tell you it sure is a fun ride. 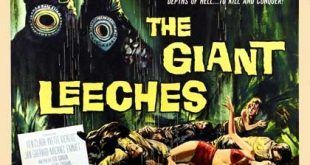 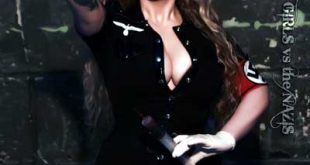