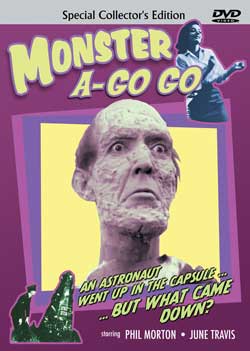 A space capsule crash-lands, and the astronaut aboard disappears. Is there a connection between the missing man and the monster roaming the area?

Films like this one are alot of fun to review (usually). For one, they fall somewhere into the cult classic cheesy products of long ago. Two, they have history that has had plenty of time to wind up that the DVD itself features a cool multi page insert booklet about the film and its production. And 3, they just don’t make films like this anymore, for better or worst. Speaking of worst, this film features that notion on its sleeve proudly to the point of it being a marketing ploy in its success. This must be the year of comeback bad films as I just had the pleasure of reviewing the “Troll 2” recently. No, this film was an offbeat product directed by Bill Rebane and Herschell Gordon Lewis on which Lewis still remains uncredited in its association. 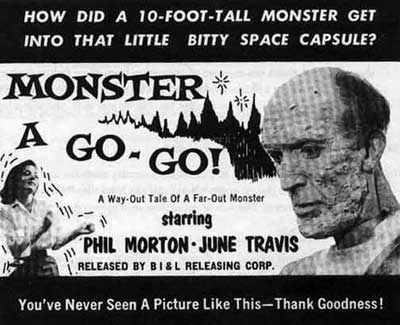 The product upon first start might even serve to be one of the best sleeping aids on the market as its soothing droning, black and white style and quiet mix matched audio ranges has a certain hypnotic way about them that would put a crying baby to sleep faster than ocean sounds and rainforest mixes. Though the real story here is that the product was fully intended to be a serious product that appealed to a cross horror / sci fi audience. The film ran out of money and so that product just sat shelved for quite some time. This when Lewis stepped in need of a like product and finished it by adding some rather odd scenes for marketing appeal. Though those scenes are what has made this such a disjointed experience. It doesn’t stop there as cast member who were in the original were replaced midway in the film while others who had acted in it had radically changed since the time delay between the 2 productions of it. You might recognize the film if you are a fan of Mystery Science Theater as it was featured on the show and is probably one of the better iconic pieces that a show like that was made for. 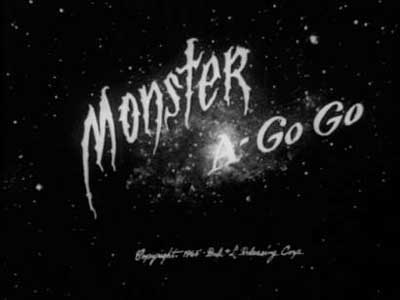 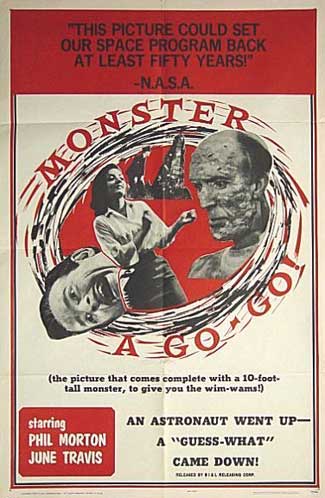 Now on to the review. I must say, that after attempting to get thru this 4 times now, it really is a “put you to sleeper”. The uneven audio tracks, the droning score and the featureless black and white make this one really hard to sit thru. I kept telling myself, that there is something culty here that deserves attention, but just keeping my interest in some of these monotone left field script lines was a struggle in itself. 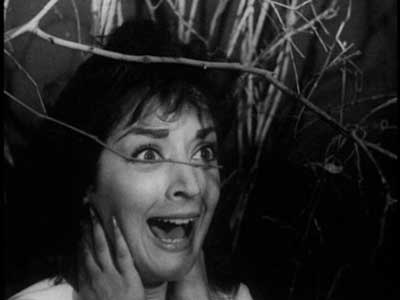 As we get to the heart of it, an astronaut by the name of Frank Douglas has disappeared from his craft when it plummets back down to earth. The craft itself contains an odd rusting type material that is also in question, but mainly the scientists want to know what happened to the astronaut. We later find that Frank has been swapped instead with a lurking, tall radioactive monster humanoid which seems to allude the authorities every time it’s captured.

The film itself falls into the “worst” category with not only a lethargic presentation but with its odd-pieced editing style. Some scenes pop in out of nowhere that really don’t seem to have much to do with the previous scene. Others are typical conversation scenes that are just edited back and forth in a haphazard way. I think the film stands better as a piece to be mocked and laughed at than as a real piece of important cinema. In fact, you may find humor in just those elements alone that make the experience one to look for mistakes, continuity errors and ridiculous logic at times. Why they felt the need that it needed some hipster dance scenes thrown in to sell more tickets is beyond me. But the result is so odd that it also deserves a laugh. It’s classic B-grade miss mash that only has appeal in its disjointed effort. REcommended with friends and plenty of beer.