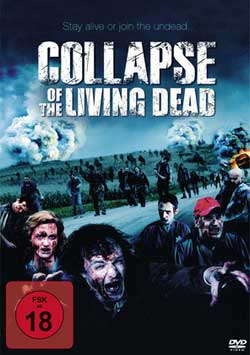 The normal worries of a struggling small town farmer are blown away when the world is suddenly overrun by undead monsters. How can a good man protect and provide for his family in a hostile world without becoming a monster himself?

These days it feels as though zombie movies have gotten every single treatment imaginable. From the use of “found footage” to running zombies to undead Nazis and a host of other techniques and gimmicks, the walking dead as a genre piece has been done and redone for decades, almost to the point where any new zombie movie must have something new and fresh about it in order to be deemed worthwhile for viewing. The 2011 work Collapse does not really have any gimmicks, but what it does have is a surprisingly compelling story, which may be a gimmick in itself.

The film follows family man Robert Morgan (Chris Mulkey) as he defends his wife and sick child from the zombie apocalypse. I say “he defends” because for the most part, he doesn’t allow his wife to do anything, insisting that virtually everything is too dangerous for her. To back track, before the wave of the undead hit, we get to see the Morgan family as they deal with their relatively trying existence in a rural farmtown. Though it is never explained, it becomes clear that the Morgan’s oldest daughter died six months prior, and the grieving process has been particularly hard for mom Molly (Karen Landry). To make matters more difficult, bills have been piling up on the Morgan’s table, and the bank has been threatening to take their home. All of these things weigh heavily on Robert especially, as he feels that as the patriarch of the family he has to hold everything together. “I take care of my family. It’s what I do.” 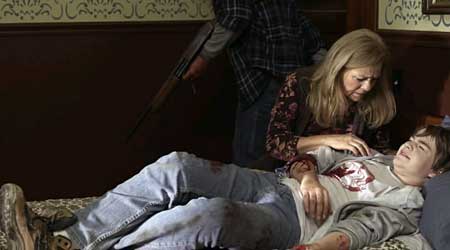 Once the undead surround the house, all matters of finances and grief seem irrelevant. Robert takes it upon himself to board up the windows, lock up their son’s medication and constantly stand watch for the walkers. For a good quarter of the movie, he is feverishly insisting that everything will be fine and that he will take care of everything. Things become a little tenser when the generator dies and the cowering Morgan’s run out of food. Insisting that Molly must stay inside at all times and must try to even stay away from the windows, Robert launches a rogue mission into town in search of food, supplies, and any other survivors. The trip into town not only leads to more zombie encounters, we also begin to see Robert cracking a little bit, and soon afterwards we learn that we cannot fully trust everything we see through his eyes. 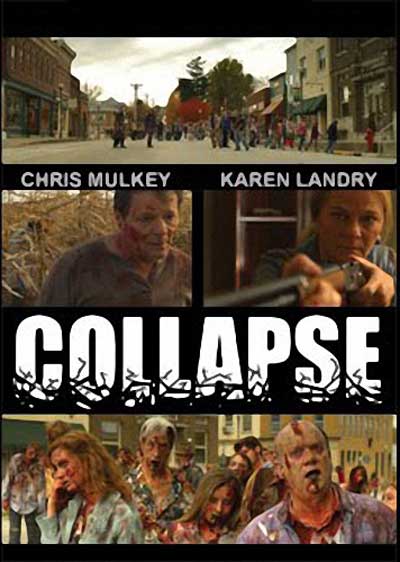 The plot and characters of Collapse are actually pretty spot on, particularly in that the actors look like normal people. I’m sure Chris Mulkey and Karen Landry wouldn’t take it personally if I said that don’t really have movie star looks, because it just adds to their believability as a farm tending husband and wife. Where the film suffers most is special effects and make up. The zombies look pretty good, but whenever a gun is shot or someone gets stabbed, it’s very, VERY obvious that it’s not actually happening. This definitely detracts from the quality of the screening, because zombie films often depend on the horror of the blood and guts in order to convey the monstrosity of the situation.

What really makes the film great is the ending, tipping the scale in favor of a WIN for the filmmakers. Despite the glaring issues with visual effects, the story is good and more importantly, the narrative of a man who’s world is crumbling around him is done surprisingly effectively. This low-budget tale doesn’t offer up all of the scares, but is worth a viewing nonetheless.