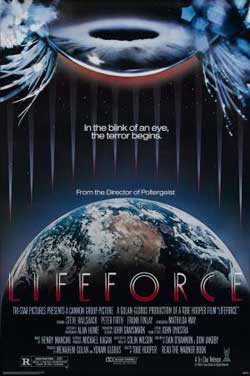 A race of space vampires arrive in London and infect the populous.

If you’ve never seen this movie it’s the one with the nude space vampires. Well, at least one nude space vampire that is worth mentioning and her name is Space Girl (played by the absolutely stunning Mathilda May). Seems weird in a movie review that in the first paragraph the focus would be on an actress who walks around naked for most of her role. But, in all honesty, she is the movie.

Released in 1985, Lifeforce may be remembered for some other things but first and foremost would be Mathilda May. To put it into some context. I told a co-worker of mine that I would be reviewing Lifeforce, a film that I or him hadn’t seen in many years. The first words out of his mouth, no joke: isn’t that the one with that nude girl?

In a way it’s a shame (although there are worse things to be remembered for and in the interest of full disclosure you won’t hear me complaining) because overall Lifeforce is a pretty good movie, although one of those that the viewer will either love or hate. Boasting a strong cast, great director, great screenwriter and some pretty good special effects, there isn’t too much to complain about here. 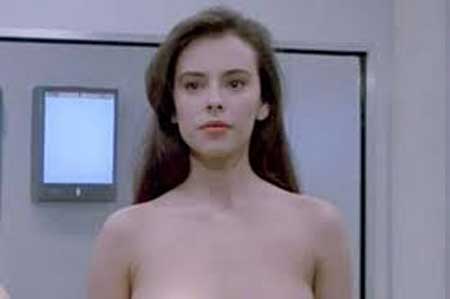 Okay, the plot can be a little strange, some of the effects are cheesy, the acting can be a tad overdramatic at times and the movie seems to run about fifteen minutes too long. But there are zombies, aliens, vampire bats, decent amounts of blood and did I happen to mention the lovely Mathilda May?

But just what the heck is all of this about. The opening voiceover gives us a clue. “August ninth, two thirty p.m. Greenwich time. The HMS Churchill outward bound, on board a joint British American space team. Their mission, to intercept and study the comet baring Doctor Edmund Halley’s name.”

What the team, led by Colonel Tom Carlsen (Steve Railsback), doesn’t know is that floating with the comet is a two mile by one hundred and fifty mile spaceship. But they are about to find out. And not only that, but the ship contains the bodies of two males and one female, all nude, encased in some type of capsule. In addition, there are tons of desecrated bat-like creatures floating around. So they do what any good team in a horror movie would do and bring them back on board the Churchill. 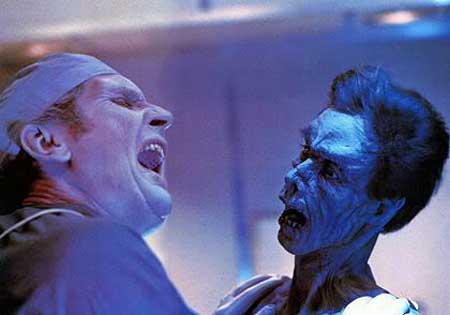 But thirty days later mission control down on earth realizes something has gone terribly wrong. Transmissions with the Churchill have been lost so another ship is sent up to find out what’s wrong. They discover the Churchill basically burnt to a crisp save for the three capsules containing the nude bodies. They bring them back down to earth with what could be called disastrous results.

From here the movie plays out in a slightly straightforward progression as the space vampires awaken and begin to wreck their havoc. And what havoc it is. I mean, all they need to survive is to drain some of our lifeforce every two hours, that blue cosmic material that lives in all of us. What, you didn’t know?

In the end, Lifeforce is an entertaining movie that dare I say never takes itself too seriously. I mean, we’re dealing with nude space vampires! It’s like something out of a fifties science fiction movie. I’m guessing Tobe Hooper had an absolutely blast making this movie, as did all of those involved. The screenplay was co-written by Dan O’Bannon (yep, that Alien and Total Recall guy) and it covers a lot of ground to say the least. 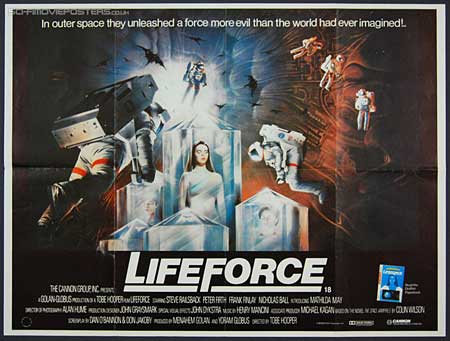 All in all I would recommend seeing Lifeforce if for no other reason than to say you saw the film “with that hot naked space vampire chick.” But in doing so you’ll discover an over the top sci-fi horror movie that contains some other great parts as well. For Tobe Hooper fans you’ll definitely want to check it out and for some it might even rate a buy if you like his work that much. I’ll say this though, he rarely delivers a boring, run of the mill movie and Lifeforce is a great example of that.