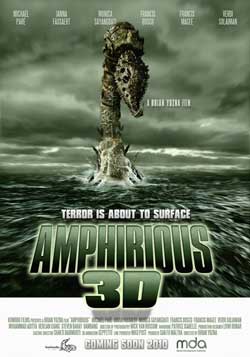 Marine biologist Skylar Shane hires an expat charter boat captain, Jack Bowman, to help her find prehistoric life form samples in the north Sumatran Sea. During the expedition, they run into some of Jacks freinds, a gang of smugglers headquartered on a fishing platform in the middle of the sea.

“Amphibious 3D” is the latest effort from cult horror maestro, Brian Yuzna. Yuzna is known for such fare as “Bride of Re-Animator” (1990), “Return of the Living Dead III” (1993), and “The Dentist” (1996). The director does not stray far from his brand of wacky, sci-fi horror for this piece.

A strange exposition has Skylar Shane, played rather poorly by Janna Fassaert, charter a boat to help her study fossils in the Sumatran Sea. Her first interaction off boat happens to be with a band of mercenary smugglers who live on a fishing station in the middle of the sea. After an altercation involving the slave children held on the fishing rig, her boat leaves, captained by Jack Bowman (Michael Paré). Once gone, one of the mercenaries is killed by a strange sea creature. 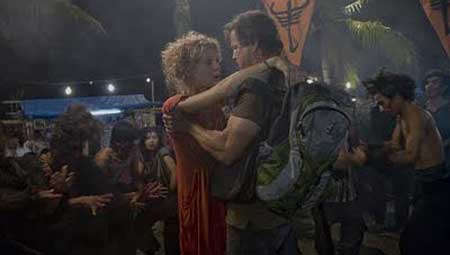 The effects are rather inconsistent in this film. Some are pretty convincing, most notably the gore effects. When someone has a bite taken out of them, or a gaping wound, it can look very realistic, while the creature effects leave much to be desired. Some superimpositions in the first act look pretty terrible also (but when does a superimposed image really look good at all?). One scene that really sticks out well involves a boy with a half-torso being held up out of the water, with blood dripping while he cries out. 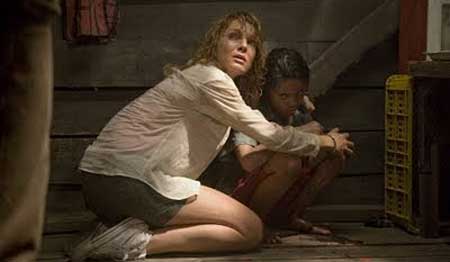 With the strange mesh of effects, the film’s camera work and color, look good throughout. It seems this film had some production value along the way, but the creative team did not know how to spread it around. Where the production fails to focus enough attention is the on screen talent. None of the actors, whether they are leads or supporting, holds water as a believable character. Strange inflections, awkward accents, and the choice to rely on child actors with no real experience, all add up to a cast that keeps the storytelling at bay, and never really lets the audience escape into the world of the film. 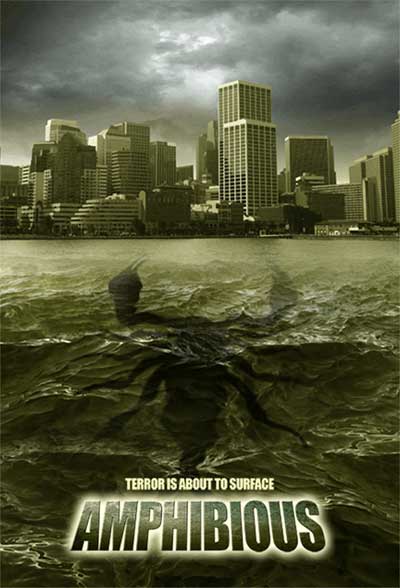 The film cannot seem to decide what characters to follow. Sometimes is seems as if the boat and its passengers are the focus, while other times, the child slaves seem to be the focus. Even with this, it lacks the feel of an ensemble cast. It confuses the viewer. Who should the audience be rooting for? 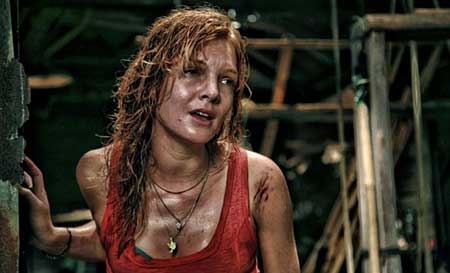 The movie really takes a lot of cues from “Jaws” (1975), with some homage sequences, and many similar scare scenes. While the Hitchockian approach worked for Spielberg’s masterpiece, it does not work here. Filmmakers must know their audiences. “Amphibious 3D” is not high-brow, and looks only to provide cheap thrills. Adding unnecessary somber moments, and awkward character development, lets this bargain bin horror flick flat. This movie would have done much better to provide more gore effects, less “story,” and more thrills. The down-time between kill scenes is boring at best, and often times provides no real purpose to drive the film. 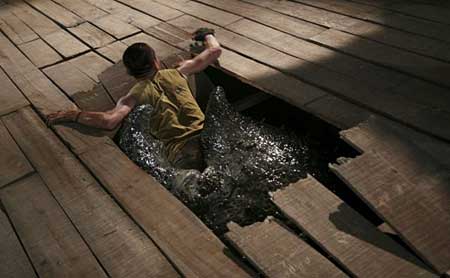 Of course, by the beginning of the 3rd act, Shane, who is a marine biologist, realizes after one sighting that the creature scaring the hell out of the boat and smuggling crews, is an ancient amphibious beast that has survived for thousands of years in the depths of the ocean. It’s a little deus ex machina to be believable. Character motivation is seriously lacking for most of this film as well. None of the decisions the characters make, are really justified. Why do they risk their lives when they know that something is stalking them? Why do sometimes heroic characters, turn cowardly? Why do they come back when they have already reached safety? 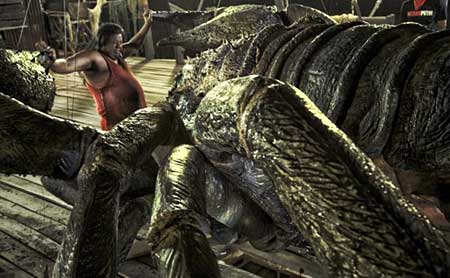 All in all, some cool effects, with terrible acting, nice cinematography, and a cheesy story, make this a film to be watched with friends and beer. It will find an audience in college dorms, bachelor pads, and at frat parties. This is sub-par in many ways, but most anyone who chooses to watch it, will know what they are getting into, and can ultimately have a fun time.