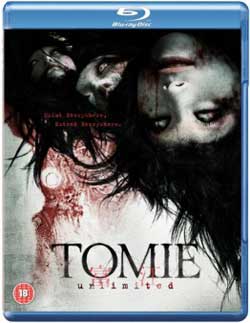 Noboru Iguchi (RoboGeisha) is back with another horror film packed to the brim with outrageously ghoulish gore and oceans of fake blood. Tomie: Unlimted, from the original manga by Junji Ito, follows the young high school student Tsukiko (Moe Arai). A member of her school’s photography club, the shy Tsukiko has always been in her beautiful older sister Tomie’s (Miu Nakamura) shadow, feeling inferior to her in every way. But when a freak accident causes Tomie to die, impaled right before Tsukiko’s eyes by a cross-shaped iron rod falling from atop a roof, it leaves Tsukiko suffering terrible nightmares for a whole year. After Tomie’s eighteenth birthday observation with her parents, Tsukiko’s nightmares begin to bleed into reality, with Tomie apparently coming back from the dead and taking control of everyone around her. It’s an odd, surreal, and disconnected world where Tomie becomes unstoppable, eternally multiplying, and everyone is turned into an instant psychopath — everyone but Tsukiko who is relentlessly harassed by her undead sister.

Under the direction eye of Noboru Iguchi, arrives another entry into the Tomie food chain. Iguchi is one busy director with tons of credits to his name. Although, this looks to be the first in the “Tomie” series from him. Before we get heavy into the story. I have to say that Tomie movies have been historically hit or miss for me. Mostly miss, and mostly quite boring. Because of that, I don’t really put these films on a top priority list. Though I was intrigued that there is a new entry that was marketing as being pretty decent…so I had to give it a whirl.

Tomie, the entity herself, has been described as ” a living embodiment of lust and all the negative emotions that go along with it, such as jealousy.” That idea is important to note as these films tend to get off track, really weird, and hard to follow. I was sure to take notes while reviewing this, but even so,I got lost a bit.

I’ll comment on what I did gain from the experience. Tomie proclaims that despite being the older sister, has reservations about the relationship with her sibling Tsukiko (Moe Arai). Tsukiko is a bright girl who is currently part of a school photography club. Tsukiko has suppressed her jealousy of Tomie for many years now, though Tomie does comment on that fact.

While taking a picture of Tomie, she photographs a freak accident which kills her sister instantly by impaling her thru the shoulder and stomach. The horrific accident causes Tsukiko to withdraw from the club leaving her an only child battling a series of terrible nightmares.

Months later, Tomie (Miu Nakamura) surprises Tsukiko and her family when she appear on their doorstep fully recovered and quite alive. The family is surprised but grateful to know that their daughter has returned to them. The only problem is….Tomie is in fact an evil spirit who fashions her exact likeness. Tomie begins ordinarily but quickly changes gear into a dark force with a living shoulder bruise complete with facial features. (Don’t ask!)

Tsukiko realizes that something is not right prompting the family to literally stab, destroy and chop evil Tomie into bits. The whole ordeal is a bit silly in execution and gruesome on the whole. Father begins a strange habit of chewing on Tomie’s hair while feeding her still-living-head parts of her mother’s tongue. Tsukiko carries on at school as usual but is shocked when a new student is introduced into class who basically “is” an exact replica of her sister. (This one is headscratcher moment figuring that Tomie’s former classmates would also recognize this…)

Now this is where I have to break and talk about a few things. The use of the name Toshio and Tomie seems to be a bit in excess for the film. Often it appeared to me that several characters shared the “same name” making it quite messy to gain any ground.

“Tomie: Unlimited” gets weird…real weird! Tomie takes on many forms and many bodies, even going as far as becoming a series of faces within a Bento school lunch. Tomie seems to be unlimited (hence the title) in that her headless body taughts at her father back home, while also occupying a beheaded corpse at school. If that wasn’t enough, Tomie becomes a series of centipedes which fashion Tomie’s head as it’s various sectionals. Then there is the giant Tomie face which also appears out of nowhere. I got the sense that Iguchi just went crazy with a flurry of Tomies.

Tsukiko is taunted by these evil forces that show no supernatural boundaries. The whole production becomes messy in that it’s hard to really premise in a normal tone. While the film is quite “unscary”, it is rich in blood chaos and freaky body morphing practicals. Viewers are advised to just accept this as a crazy “somewhat” fun ride that is void of proper story archs. Tomie is also a character who should be treated as such. She thrives on vengeance and jealousy while defying all odds with a presence that I compare more to a Freddy Krueger inclusion than a serious franchise follow-up.

Asian horror films are known for being weird in FX and cultural connections. “Tomie Unlimited” is meant for viewers who don’t take the films too seriously and are more interested in the inventive ways of re-animating Tomie herself.

I’m calling this a creatively stunning,… but poor inclusion into the Asian horror film genre fit for those who don’t mind wasting time while being entertained with eye candy treats. “Tomie Unlimited” is fragmented at best leaving much room for improvement. 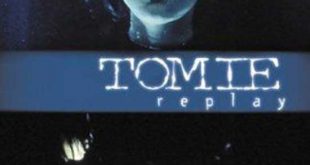