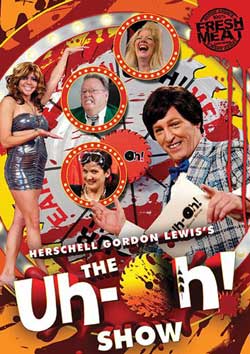 Newest cult favorite from famed director Herschell Gordon Lewis, known for BloodFeast 1 & 2, 2000 Maniacs, Wizard of Gore, and The Gore Gore Girls. Cameo by Troma honcho Lloyd Kaufman (The Toxic Avenger, Poultrygeist). Includes behind the scenes featurette. Jill Burton is a reporter who’s dead set on getting the scoop behind The Uh-Oh! Show, the gory TV sensation that’s sweeping the nation. Get the answer right and win piles of dough, get it wrong and Uh-Oh! it s off with your arms, legs, or more! Fred Finagler, the shows mastermind, feeds the fans depraved cravings by launching an even bloodier reality spectacular filled with Big Bad Wolf attacks, Hansel & Gretel-style torture massacres, and mauling mutilations from the Three Bears and a gore-crazed Goldilocks. It’s just the type of prime-time violence Fred needs to keep the ratings high

If your not intrigued by the silly name already, your sure to be entertained by this gory, campy ode to all things television. None other than the master himself, Herschell Gordon Lewis, brings you a romping slot of gory nasty fun. I like to refer to this, as if GWAR had their own TV show. 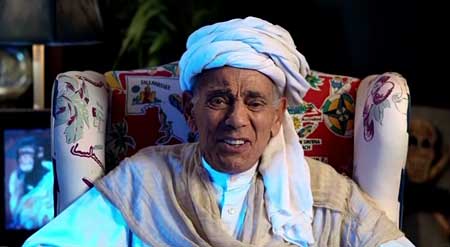 Being a product of the modern wave of excess within the TV space, you can appreciate the parody this little ditty points its dirty little fingers at. A late night television show by the name of “The Uh-Oh Show” has achieved not only great ratings but has developed its own cult following. And rightly so, this game show parody features guests each week who can win outlandish high stake prizes or suffer the loss of one of their limbs. The “wheel of misfortune” is spun by losers who must decide their gory fate. This can range from an ear being sawed off to an entire torso. The show is hosted by an extrovert talk show host who calls himself Jackie (Brooke McCarter). Jackie is indeed a parody himself sporting a jet black wig, a plaid jacket and a outfit that compares him more to a old school veteran than a cutting edge entertainer. 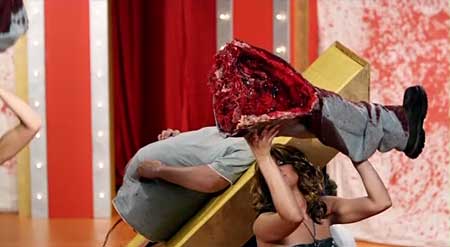 Jackie asks the questions while his lovely co-hosts provide the eye candy (one of which includes actress (HNN Vamp) Krista Grotte as “Champagne”). The questions offer unique prizes such as a weekend with a celebrity of your choice up to a million dollar cash prize. 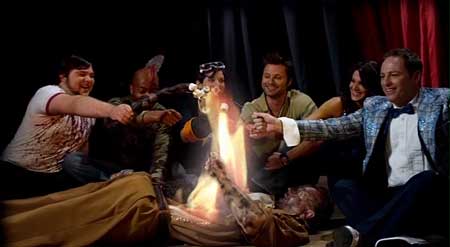 The prizes are designed to be SO extreme that no-one ever seems to win them. It does make for great TV of which the contestants are sawed at by Uh-Oh celebrity “Radial Saw Rex”. Each episode is designed to bring on plenty of nasty intestinal yankings, blood spraying overload with bodies being cut right into while the contestants themselves watch. It’s perfect Herschell Gordon Lewis stylings served up on a hardcore plate of repulsiveness. 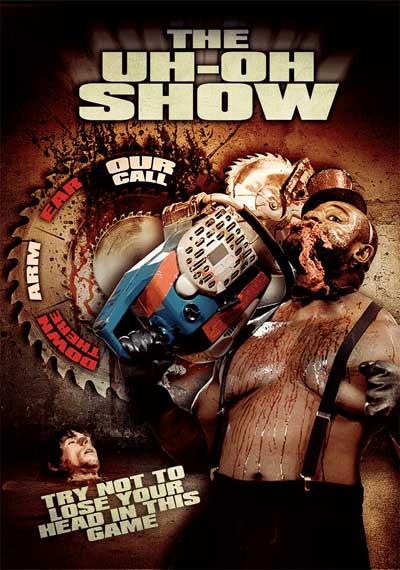 Losers are placed against a table as their body parts are sawed off in front of an overjoyed spectator audience. It’s quite a show and in some ways represents the direction we are heading as a society with our need for excessive voyeurism (maybe too extreme. but you do tend to wonder)

The show itself is overseen by head Fred Finagler (Joel D. Wynkoop), a sleazy business man who will do anything to keep his ratings up. His directives come from a network executive who demands that Fred create a show that will even exceed the ratings of the “Uh-Oh show”. It is from these marching order that Fred delivers his next splatter piece, “Grimm Fairy Tales”. 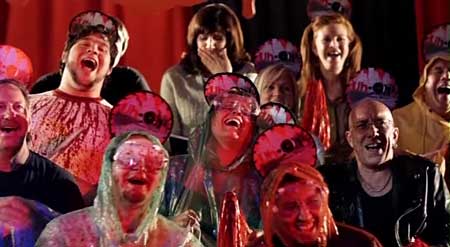 “Grimm Fairy Tales” is an episodal program that pokes fun at the classics by adding its own white trash blend of nastiness. Basically, just more opportunities to slice a few characters open and yank out their insides. 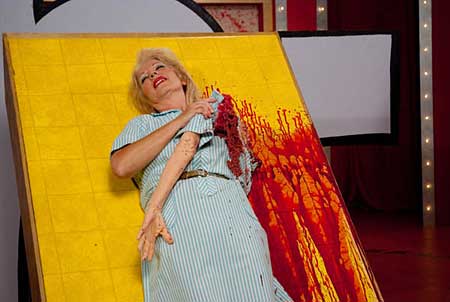 Meanwhile, a reporter named Jill (Nevada Caldwell) is hot on the trail to finding out where her contestant boyfriend Richard (Jarrett Ricker) has disappeared to. She is soon joined by the “now” ex-talk show host Jackie who is working a side job as a condom mascot. The 2 of them reel in the help of other crew members with the intent of bringing the establishment crashing down. 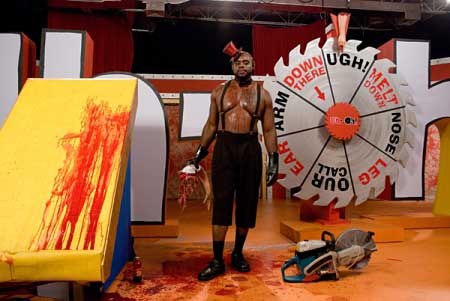 All is fun in gore and games in the world of Herschell Gordon Lewis. If you love the man’s work, this is must see! But like the Asian extremist films, you should put on your gore hound hats and get ready for a messy ride. The film never take itself too seriously and seems to recognize its impression upon audiences even before you and I get to it. With an ode to 80’s cheese, the blood keeps pouring while the limbs keep flying. Bizarre, gruesome and wonderfully extreme! 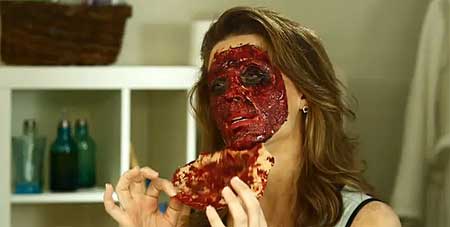 This release is distributed by the team at “Shriek Show.”