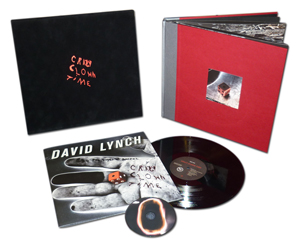 David’s first solo album! Looks like the genius has no end…check it out

“The filmmaker’s first solo album lives up to his reputation for dark, dreamlike storytelling.” – NPR

“8/10 – The production is as meticulous as the sound design in his movies. Beautifully beguiling” – Clash (UK)

“The blues reinvented for the 21st century” – The Wire (UK)

Last year David Lynch unveiled his debut LP “Crazy Clown Time”, his first, fully-fledged foray into music, to widespread critical acclaim. Recorded over a period of several months at his own studio near Mulholland Drive with engineer Dean Hurley, it was a majestic, yet powerfully idiosyncratic vision of “modern blues” that could only have germinated from the unique mind of Lynch himself, accompanied with lush, dark, off-kilter imagery.
Now, Lynch has teamed up with the legendary Vaughan Oliver to release a Super Deluxe Collectors Edition of “Crazy Clown Time”, limited to 1000 copies worldwide, released on January 23 2012. Housed in a red “leatherette” book with silver spine, this lavish package includes the album on CD, two heavyweight vinyl LP’s and a 24 page art and lyrics book, cased in a rigid black Suedelle slipcase. In Oliver’s own words:

“The design of the Super Deluxe was inspired by the original photograph of the hand with red die that David sent for use on the front cover. Red, black and silvery grey in colour it also has a low culture feel about it which I developed in a tactile way with special materials. I was aiming for a sexy, kitsch quality with the black suede slipcase and red foil-blocked type. The book that slides out enhances this concept with a red leatherette finish and silver clothed spine whilst adding an “art book” touch with the “tipped in” image of the red die set into a debossed square centred on the book cover. The overall effect exhudes, sex, sleaze and “roulette wheel” ambience. Central to the content is a lavish 12″x12″ booklet which allows David’s “forensic” photographs to dominate over a very simple, reserved approach to the lyrics layout”.