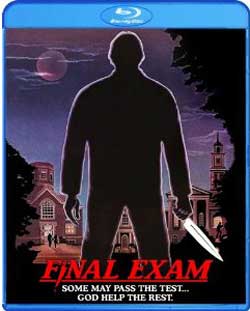 A killer goes on a killing spree at a small college in North Carolina during finals week. By the time he is done hacking and slashing his way across campus will there be any students left alive to actually take their final exams?

I know a lot of people who don’t like Final Exam, and I just think that it is a shame because I really like it a lot. Yes, it is cheesy as hell at times, the acting is subpar at best, and most of the characters are bad stereotypes, but I can’t help but dig this movie. It is just a fun slasher flick and I personally had a blast watching the killer as he went around picking his victims off one-by-one. I said in one of my previous reviews that I thought that this film was one of the most underrated slasher flicks from the 1980’s, and I really don’t understand how anyone couldn’t like it. I’ll admit that it has its share of flaws (which are easy to overlook if you ask me), but at the same time it also has a lot of things going for it that make it a classic slasher film that most fans of the subgenre will enjoy.

One of the things that I really like about this movie is the fact that the killer has absolutely no back story at all (which is the main thing that most people who don’t like the movie usually complain about). We don’t know his name, where he came from, or why he feels the need to go around killing college students and anyone else who gets in his way. He doesn’t talk at all and doesn’t wear any kind of mask, so we see his face several times and know exactly what he looks like. A lot of people don’t like the fact that he doesn’t wear a mask because they think that it makes him less intimidating and scary, but I have to disagree.

I think that fact that he doesn’t wear a mask makes the character a little more realistic and scary since you can see his face. I have a feeling that the killer was supposed to be connected to the story about the college student that killed herself because she got rejected by a sorority that one of the characters talks about early in the movie but the filmmakers decided to scratch the idea for some reason. Still, I am not bothered in the least by the fact that we don’t know a thing about him as I like that he could just be some twisted bastard who just likes killing people and doesn’t need a reason to do so. 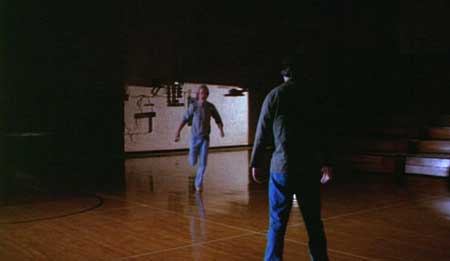 As I said earlier in this review, most of the characters are bad stereotypes that are obviously just fodder for the killer, but at the same time I also really liked the majority of them for some strange reason. I think that the reason that I liked them was due to the fact that they were just so bad and cheesy that you couldn’t help but dig them. We have the jock, the dumb blond chick, the raunchy fraternity guys (one of them who is known only as “Wild Man” who reminded me of “Ogre” from the Revenge of the Nerds movies), the nerd, the slut, and of course our final girl who is the Laurie Strode type who doesn’t think that she is pretty and spends all of her time studying and working hard on school work instead of partying and sleeping around like the others. Yes, you’ve seen all of these characters before in other films and there is absolutely nothing original about any of them, but I can’t help but like them. Sometimes bad characters can actually make a movie better (if that makes any sense), and that is definitely the case with Final Exam. 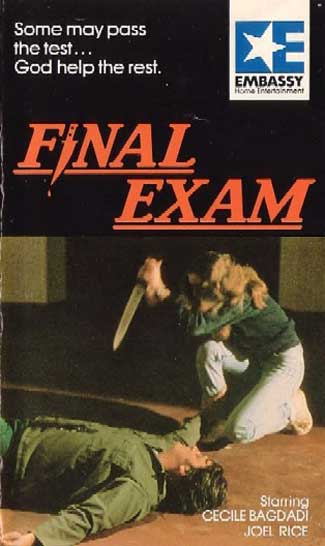 I have defended this movie for years and think that there are a lot more low- budget slashers out there that are a lot worse. It isn’t the greatest slasher in the history of film but I enjoy it. I think that if most people out there gave it a chance they would realize that it isn’t as bad as some people claim it is. Check it out and decide for yourself, in the end I think that you will agree with me and see how good it really is.

You can now get the slasher classic, “Final Exam” on bluray per Shout! Entertainment