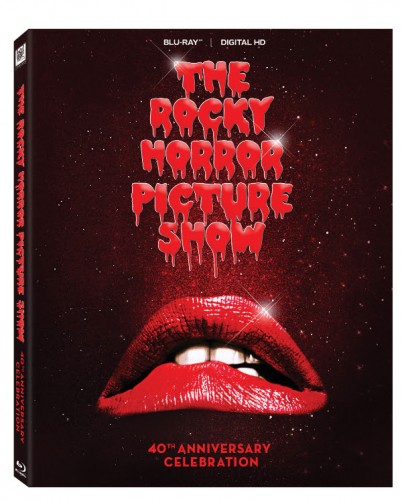 “A story of creation, love, hate, adventure and, most of all, sex. The story begins in Denton, Ohio as Brad Majors and Janet Weiss, after getting engaged, travel to see ‘the man who began it’ but wind up at the castle of Doctor Frank-N-Furter, a transvestite alien from the planet of Transsexual in the galaxy of Transylvania. And they meet Riff Raff, Magenta, and Columbia which leads to ‘doing the Time Warp again’. They discover they have been there on a special night. Frank’s creation is to be born! As Rocky has been revealed, rebel Eddie, Frank’s last-recent creation, ponders in on his motorcycle whom Frank kills. In comes Doctor Everett Von Scott, he’s come for Eddie which results in the discovery of Eddie’s deceased body. Frank chases Janet, and Brad and Doctor Scott chase Frank, which results in everybody but Frank getting frozen. Enter the floor show which then turns into the horrifying death of both Frank and Columbia die and the castle’s blasting off! Brad, Janet and Doctor Scott survive and leave with torn clothes and battered bodies.” (courtesy IMDB)

After a rocky start (pun intended), The Rocky Horror Picture Show (1975) became an enduring cult success, beginning in the USA at midnight-movie screenings, where the audience would dress up, chant lines and comebacks in unison, pull visual gags, dance, sing and generally take part in a kind of mass group therapy. The film was based on a small-scale but very successful British stage musical, and many of the original players were used in the film. Much of the film’s success can be ascribed to the leering eroticism of Tim Curry as Doctor Frank-N-Furter, the transexual from Transylvania, in black fishnet stockings, garter belt and lots of sexy eyeshadow. 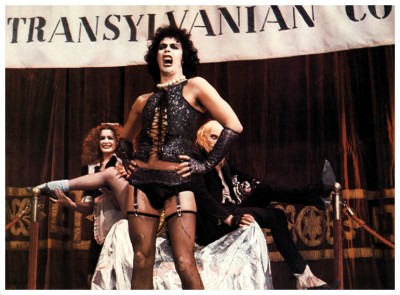 The jokes are mainly to do with the arrival at his decadent mansion of boringly straight Brad Majors (Barry Bostwick) and Janet Weiss (Susan Sarandon), just in time for Frank-N-Furter to unveil his latest creation, a handsome but rather effeminate-looking creature named Rocky Horror (Peter Hinwood). The film’s co-author, New Zealander Richard O’Brien, plays Riff-Raff, the mad doctor’s inevitably sinister hunchbacked assistant. Things progress complicatedly and rather feebly from there – the film is weaker than the original stage show – but is laced with enjoyable in-jokes for genre fans, especially in the lyrics to some of the songs such as ‘Science Fiction Double Feature’ as well as performing the final floor show in front of a replica of the RKO tower – RKO made many of the horror movies of the thirties, notably King Kong (1933). 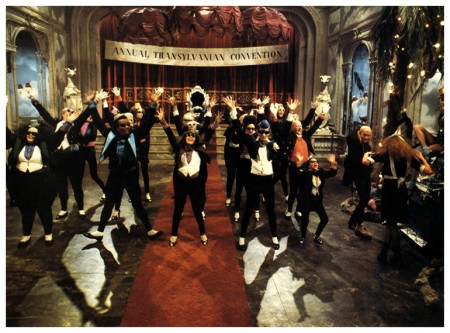 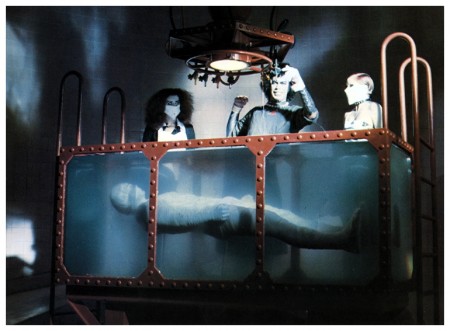 The Rocky Horror Picture Show is an extraordinary phenomenon. Something about the film’s combination of elements from punk and glam rock with the trendy emphasis on bisexuality seems to have helped it along, and Curry’s resemblance to Mick Jagger may have been a factor too. This is the one movie that can’t even be discussed without mentioning its fans, for they have changed it from being an undistinguished campy horror send-up to a fabulously entertaining multi-media midnight show. It is the ultimate audience-participation film. Cultists who may have seen the film hundreds of times, dressed like their favourite characters, recite the dialogue en masse, shout out their own additions to the script and, under a spotlight, put on a singing-dancing-miming performance that both duplicates and parodies the action taking place on the screen above them. 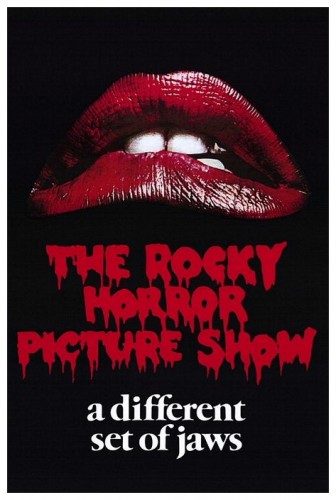 It was like no show around, neither intimidating nor smug and, under the right circumstances, is almost a throwback to when movies brought entire communities together. The beauty is that in one row of seats you’ll find gays, transvestites, psychology students, punk rockers, comic book addicts, science fiction nuts, stoned-out viewers left over from the previous film, high school students out on dates, and people who wonder what they’re doing there at all. In any event, the film at its midnight screenings bridges a gap between cinema and theatre in a way that has never happened before or since, for here the audience becomes the actors, and the auditorium the stage. 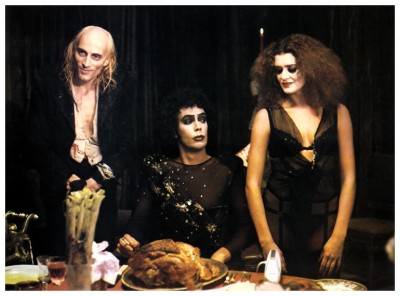 Adapted by director Jim Sharman and Richard O’Brien from O’Brien’s stage musical The Rocky Horror Show, it tells the story of Brad and Janet from Denton in Ohio who, lost in the rain, find the castle of Doctor Frank-N-Furter. Also present is his strange butler Riff-Raff, weird maid Magenta (Patricia Quinn), motorcyclist Eddie (Meat Loaf) and his groupie Columbia (Little Nell Campbell). On this eventful night, during an annual convention of visitors from the planet Transexual, Frank-N-Furter is bringing handsome muscular Rocky Horror to life. Soon Eddie’s uncle and UFO investigator Doctor Everett Von Scott (Jonathan Adams) turns up to join in the proceedings. 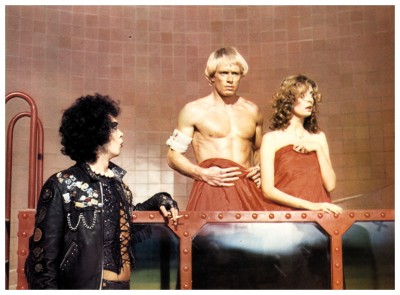 When viewed alone on DVD, the movie is not particularly well-made nor amusing, but I do like it when the stodgy criminologist (Charles Gray) stands on his desk to demonstrate the dance steps. The big production number of Let’s Do The Time Warp Again is a lot of fun, as is Meat Loaf’s wild rock’n’roll number ‘Whatever Happened To Saturday Night’. I also like the concept of portraying the doctor from the Frankenstein tale as the real monster of the piece – Curry is absolutely dynamic as the cinema’s first masculine-acting sweet transvestite. There’s also the dirty-lyrics number ‘Touch-a Touch-a Touch-a Touch Me’ that Janet sings while moving Rocky’s hands over her breasts, and the sequence in which Frank seduces both Janet (while pretending to be Brad) and Brad (while pretending to be Janet). Despite the film’s attempt to breech every known cinematic taboo – homosexuality, lesbianism, cannibalism, incest, transvestism, etc. – I wish it were more jarring and braver but, unfortunately, it just peters out and, to a first-time viewer, becomes downright confusing. Luckily, the cultists in the audience maintain their hectic pace right to the very end. 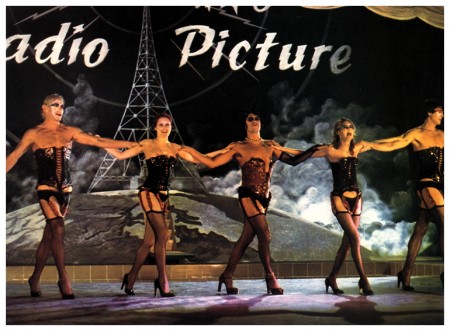 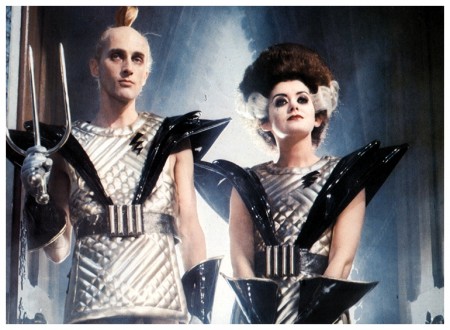 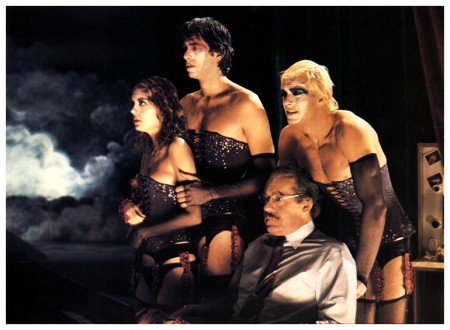 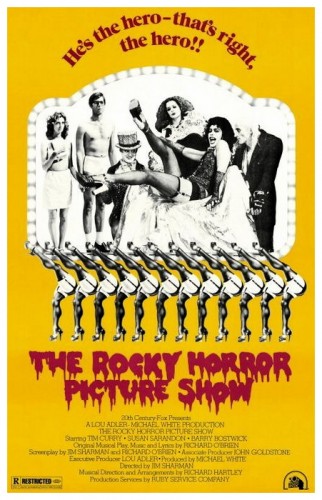 Due to the cult popularity of The Rocky Horror Picture Show, Twentieth Century Fox green-lighted a sequel called Shock Treatment (1981) written and produced by the same team, in which Brad (Cliff De Young) and Janet (Jessica Harper) become contestants on a television game show, but wind up as captives instead. Although a very poor sequel, as a stand-alone film it is quite clever, foreseeing the incredible boom of reality television that dominates the medium today. Produced by Michael White and featuring comedy actors such as Barry Humphries, Rik Mayall and Ruby Wax, Shock Treatment feels more like an episode of the British television comedy series Comic Strip Presents. It’s with this observation I’ll respectfully request your persistence…I mean, presence next week, when your leg will be crudely humped by another cinematic dog from…Horror News. Toodles!

Blu-ray Special Features:
Includes both the U.S. and U.K. versions of the film

DVD Special Features:
Includes both the U.S. and U.K. Versions of the Film

Commentary By Richard O’Brien and Quinn (Magenta)
The Theatrical Experience
Prompter: “When do I squirt my water pistol and when do I scream?”
And More!