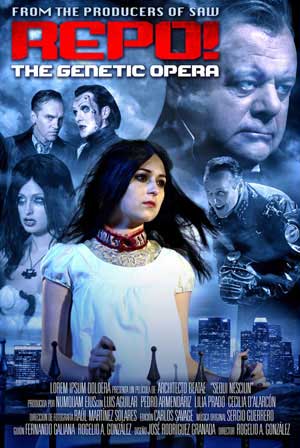 In the near future, a biotech company saves mankind with synthetic replacements for failed organs. But those who default on their new liver or heart are subject to repossession. Shilo (Alexa Vega) navigates this dystopia while searching for a cure for her rare illness. Her odyssey is set to a number of catchy songs in this tongue-in-cheek opera. Paris Hilton, Paul Sorvino, Anthony Head and Sarah Brightman round out the deliciously diverse cast.

“What’s the matter graverobber? Can’t get it up if the girl is breathing?”
~Amber Sweet

While I was reviewing the After Dark Film Festival in Toronto I almost missed the hit of the place, but thankfully stayed to watch “Repo! The Genetic Opera”. “Repo” blew me out of my seat and kept me grinning at its dark futuristic version and it is a musical too. The cast is first rate: Alexa Vega (Shilo), Anthony Steward Head (Nathan/Repo man), Sarah Brightman (Blind Mag), Terrance Zdunich (Grave-robber), Paris Hilton (Amber Sweet), Paul Sorvino (Rotti Largo), Ogre (Pavi Largo) and Bill Moseley (Luigi Largo) all impress with their acting/singing.

The story is strong, build on power struggles for money, power and love. The movie is gory and the humor is dark but the story is not afraid for love to be pure and a powerful force. Anthony Steward Head is amazing as a man torn by love for his daughter and guilt for what he believes he has done and all the repo work he is doing. He is believable whether he is trying to over protect his daughter or ripping guts out of defaulting victims. Terrance Zdunich as the Grave robber successfully plays the seductive voice of decay as a sort of Greek chorus. He helps set up and then watches from a distance as the world goes crazier.

* Anthony Steward is amazing. He can be scary and fatherly in a moments notice. His singing voice is powerful and he is not afraid to sound ugly.
* Paris Hilton became Amber Sweet; you could forget who she was. She made a fan out of me for the first time in my life.
* Sarah Brightman and her hologram eyes. The visuals for the song “Chase the Morning” are stunning and the acting and singing keep up.
*The Blade Runner like visuals work well with the story.
*The Grave Robber looked like he jumped out of the Body Snatcher, yet fit with the visuals. The future is backwards and forwards.

*Nothing, Sorry but I loved this movie from start to finish and wouldn’t change a thing. This movie needs a wide release. Buy the soundtrack, write Lion Gate. Let them know you want to see this movie on the big screen.

A great movie! The filmmakers had it all, with a great script, great acting and great cinematography and editing. I give it 6 out of 5. The movie is currently in very, very limited release. This movie is worth finding on the big screen. 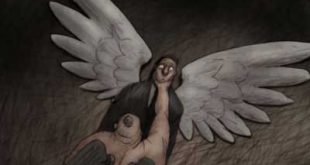 From the Nightshift: After Dark Film Festival Part Two