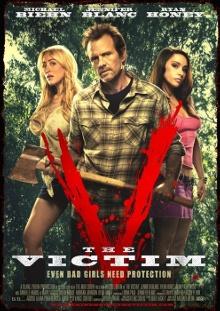 Who doesn’t like Michael Biehn? Seriously, the dude kicks major ass and I for one am glad to hear that the man is getting his turn behind the camera and Anchor Bay has liked what the saw and gone ahead and picked it up for release.

The flick is called THE VICTIM and Mr. Biehn promises Grindhouse fun for all who come along for the ride. Anchor Bay sent over a press release heralding the news so read on and all the details will be revealed.

Story wise this is what THE VICTIM is all about:

Good time girls Annie (Jennifer Blanc) and Mary (Danielle Harris) find themselves in a life and death situation. Annieâ€™s life is put in jeopardy when she is witness to a violent act at the hands of two Sheriffâ€™s Deputies. Fleeing from attackers (Ryan Honey, Denny Kirkwood), she stumbles across Kyle (Michael Biehn), a recluse living in the middle of the woods. The ruggedly handsome loner stays far from civilization â€“ that is â€“ until a single knock on his door throws his solitary life into chaos. Two worlds collide in this psychological thriller that will make you question your trust in mankind. Who is the victim?

Apparently a theatrical release is being planned along with a college tour also in the works. I betcha we are looking at one of those infamous “limited theatrical runs” followed quickly by a Blu-ray / DVD launch. No dates or time frame is divulged but as soon as it shows up in my inbox, you’ll know about it.