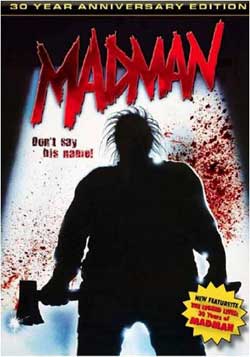 Sitting around the campfire, a camp counselor tells the campers about the story of Madman Marz, a mean-spirited famer who went nuts one night years ago and slaughtered his entire family. He was supposedly killed by an angry mob as a result, but his dead body disappeared as if it just got up and walked away. The legend goes that he still lurks about in the woods by the campground, and if you call out his name he will come find you and brutally murder you. Of course one of the campers does so and Madman goes on a killing spree across the camp, butchering anyone he comes across.

In my opinion, Madman is one of the best 80’s slasher flicks ever made but for some unknown reason it is either largely ignored or just outright hated by most people (except for the hard core slasher fiends like me). I can kind of get why some people haven’t heard of it (Hell, I take pride in the fact that I saw pretty much every slasher flick known to man when it came out in the 80’s but I didn’t see Madman-or even know of its existence-until 1999 when I ran across it at an old Mom and Pop’s video store), but I can’t wrap my head around why anyone would hate it. It has all the essential elements needed to make a great 80’s slasher flick such as a camp setting, horny camp counselors, a spooky legend, a giant, unstoppable killing machine, and some really fun and creative death scenes. I personally love this movie and think that it is totally underrated. 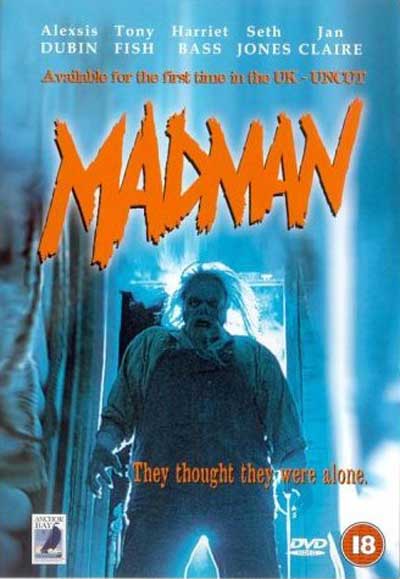 I think that the character of Madman Marz is just awesome, and he has a very cool back story. He’s one brutal son-of-a-bitch and it is obvious that he enjoys his work. Basically he is just this big monster-like hillbilly guy running around in a pair of overalls who likes to hack people to pieces with an axe (he also kills a few people with his bare hands too). I wonder if he wasn’t an inspiration to the great Adam Green when he came up with the character of Victor Crowley for the awesome Hatchet movies as they are similar characters. I like the fact that we don’t really get a good look at him until toward the end, and when we finally see him it isn’t a let-down as he is pretty tough-looking. 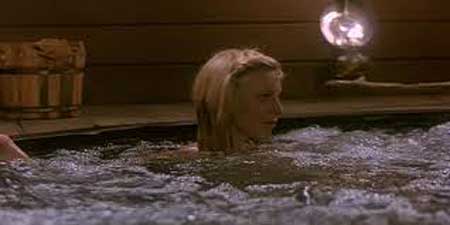 Did I mention that there are some awesome death scenes in this movie? We get some bloody fun with an axe a couple of times, a hanging (that leads to something else that I won’t spoil for you here), a man broken in half, and someone has her face nearly ripped off before being impaled on a meat hook. The best death scene though, involves a woman working under the hood of a truck, trying desperately to fix the engine before Marz catches up to her. I’m not going to ruin It, but let’s just say that he catches up to her and what he does to her is pretty creative (and probably pretty damn painful too). There isn’t a huge body count and the movie isn’t the goriest slasher flick around, but I think that most viewers will be happy with the amount of violence that they get (I know that I was). 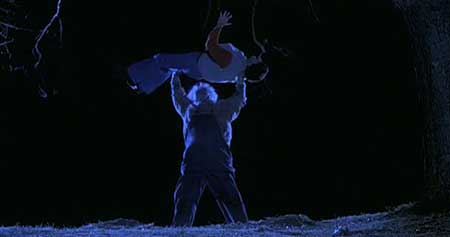 I also really like what happens toward the end as well. It isn’t a twist of any kind, but something happens toward the end that generally didn’t happen in these types of films in the 80’s. I am dying to tell you what I am talking about but it would ruin the fun of seeing it for yourself. When my wife and I watched it together recently she admitted that she expected a certain cookie-cutter element that was usually present in 80’s slashers and was quite surprised when this didn’t happen. The only hint I can give you without ruining it for you is that if you are expecting a happy ending then you are going to be let down. 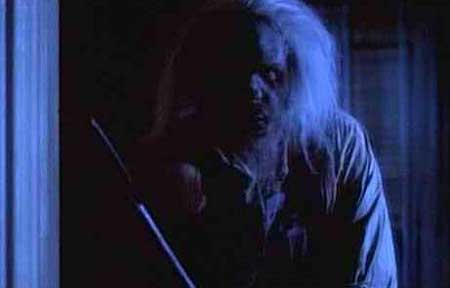 I think anyone who is into horror films (especially slashers) has to see Madman and will dig it as much as I do. I think that Marz could have been the next big thing like Jason, Freddy, and Michael, but it just didn’t happen. I really hope that it is never remade as I am sure that it would suck out loud like most remakes do, but I really wouldn’t mind seeing a sequel or two if it was done by people who knew the character and cared about the original movie instead of some Hollywood asshole looking to make a quick buck. If you get a chance check this movie out, and believe me when I say that it is totally and completely kick ass. They don’t make ‘em like this anymore.