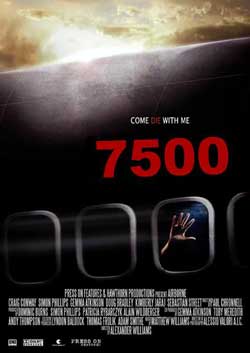 Passengers aboard a flight across the Pacific Ocean encounter a supernatural force.

“Ghosts on a Plane.” Aware of only a vague plot synopsis before firing up our latest, it took about halfway in for that humorous alternate title to pop into my melon. Once there, it refused to leave. My apologies to anyone I’ve doomed to the same fate in viewing.

Luckily, your enjoyment of “7500” (an even worse moniker, but I have a pet peeve about titles that contain only numbers) will most likely depend on how seriously you don’t take it. Perhaps comparison to the likes of “Snakes on a Plane” and zombie bastard stepchild “Flight of the Living Dead: Outbreak on a Plane” is a bit harsh, given the pedigree of the cast and its director, J-Horror superstar Takashi Shimizu (the “Ju-on” series and pointless “The Grudge” remakes). Though solemn as a eulogy compared to the other two, this approach proves detrimental to a film merely dishing out a different flavor of silly, mile-high twaddle. 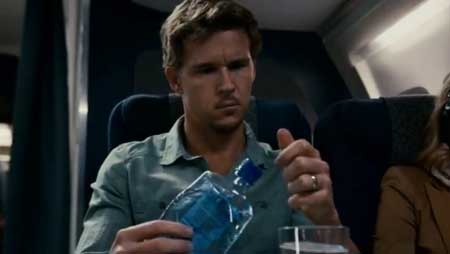 The endeavor begins wisely with a quick teaser of the very best scene, to happen later but presented initially as a dream sequence. Shrewd move, promising compensation for the agony of the rest of it. We are then introduced to the insanely overstuffed cast of passengers and crew as they are boarding Flight 7500 for Tokyo. Discerning between them would have been an easier task if they possessed anything remotely resembling distinct personalities. A lot less white people in the mix could’ve helped as well. We all look the same to me.

A conversation straight out of a Lifetime Movie between attendants Laura and Suzie gives good indication of what’s in store. Leslie Bibb (“Hell Baby”) and Jamie Chung (“Sin City: A Dame to Kill For”) are accomplished actresses, but phone-in performances that do the insipid dialogue no favors. Unaware, you’d swear this was their debut and hope they’d kept day jobs. Same goes for the normally outstanding Amy Smart (“The Butterfly Effect”) and Ryan Kwanten (HBO’s “True Blood”), both completely wasted as former lovers Pia and Brad, together because they don’t want to ruin the trip for their travelling companions. Who can blame them? After a bitter break-up, my first concern is how my friends will feel about it. 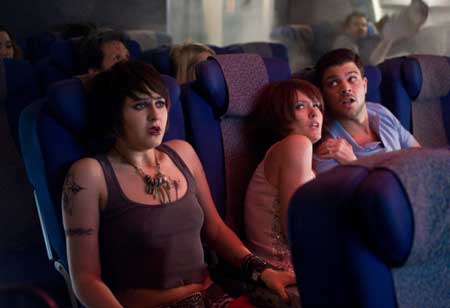 Only two members of this woeful ensemble stand out. As freshly wed bridezilla Liz, Nicky Whelan of “Halloween II” manages to eke as much fun out of the obnoxious role as possible, finding pathos in essentially a one-note bitch. Also not embarrassing herself is Scout Taylor-Compton (Lita Ford in “The Runaways”) as goth girl Jacinta, who is forced to deliver an awkward mortality speech one moment, then rattle off long-winded exposition that only a Japanese folklore scholar could possibly know in another. She tackles both with aplomb. There are a dozen or so other individuals that should be discussed, but they’re forgettable to the point that my integrity will be compromised if and when they’re mentioned.

Following a patch of turbulence six hours out of Tokyo, a mysterious passenger bearing a wooden box carry-on has what appears to be a heart attack and dies. Reluctant to land due to weather, Captain Haining (Johnathon Schaech, right in his limited wheelhouse with this material) decides to forge on. Everyone is condensed to the lower level, and the body is covered in a blanket and strapped into a seat in the upper deck.

When the corpse is found missing, everyone begins having frightening visions of a shrouded specter, seen vaguely in reflective surfaces because that’s the only way specters make themselves known in movies anymore. Soon the scavenger hunt for clues to the dead man’s identity is on, and Jacinta is the only one with the sense to get the box from the overhead compartment. Meanwhile, the others attempt in vain to crack his laptop password as Laura searches for his luggage in the cargo bay moments after forbidding Brad from doing so. Why crawl into a black hole alone after turning away perfectly healthy volunteers? 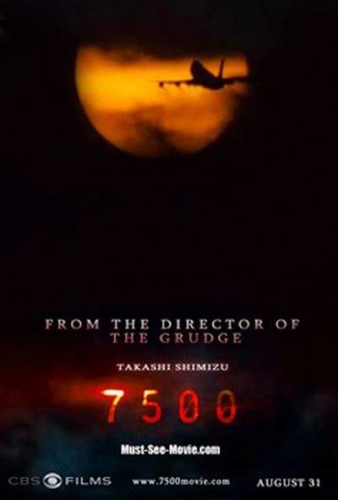 Within the box resides “Shinigami,” a Japanese death doll that serves as a malevolent guide to the afterlife for restless spirits. Technically, the name translates to “death god” and Jacinta’s explanation plays loose with the mythology, but it’s a movie so we won’t mince words. Whatever bullshit they need to sling to get an evil doll into the picture, I guess.

The Shinigami itself, though an unsettling creation (if only for the fact that it resembles Blade from “Puppet Master” in drag), is an obvious plastic toy with motorized arms and head. “7500” makes no attempt to cover this, as it clicks and hums mechanically with every movement. This begs yet another question: Are we supposed to believe this thing is an ancient harbinger of death, or that someone took the time to build a modern day version of one? Neither explanation makes a damn lick of sense.

No aspect of “7500” feels framed by cohesive thought. The editing is haphazard to the point of lunacy, especially once characters are out of their seats in the latter half. If you can tell me at what point in the film Jacinta’s nap was supposed to take place, you can have this gig. A hint: Anywhere else chronologically but where it is. Despite the aforementioned dream that really is a breathtaking sequence when it occurs in full, Shimizu is clearly cashing a paycheck here. Screenwriter Craig Rosenberg (“The Quiet Ones”) will never be accused of greatness, but after this he may be accused of drug dependency.

One can see why this has been collecting dust for two years before its U.S. release next month. Also, I suspect a better film was chopped down to the scant 79 minutes to garner a PG-13 rating. But let’s face it, friends. Even with an added eleven minutes of unbridled gore, “7500” would still be twaddle.

Skip this and watch “Flight of the Living Dead” instead. It’s absolute garbage and knows it. God bless it for that.