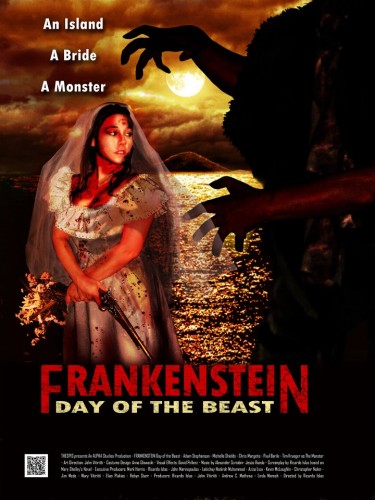 We know the story; we’ve seen the movies. You may think that it’s impossible to have a new approach to Frankenstein… Think again.

I guess I never really thought much about it until now but I just realized that I’m not much of a “Frankenstein” fan. I’ve seen MANY of the films and I guess nothing really blew me away. Maybe it was because I was so young when I had watched them, but the only real portrayal of the monster that really pops out in my head is that of Tom Noonan in “The Monster Squad”. That may have even been the last one I had watched until today. “Frankenstein: Day of the Beast”, is a micro-budgeted indie feature from writer and director Ricardo Islas that pays homage to the original Mary Shelley story as well as create its own style and feel. It’s apparent that much thought went into developing this idea and that the dedication of the crew and cast was essential in making this an interesting little film.

It is time for Victor Frankenstein (Adam Stephenson) to take his bride. The lovely Elizabeth (Michelle Shields)has traveled with Victor, a Priest (James Evans), and a group of mercenaries to a remote island for the ceremony. What they don’t realize is that there is something out there, waiting for Elizabeth. She is the key to the Monster’s (Tim Krueger) obsession. There is nothing that can stop him and anyone that steps in his way will have to fight to stay alive and his wrath is more vicious than anything known to man. 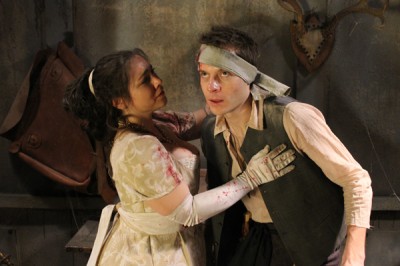 The first thing that is apparent when watching this version of the story is just how vicious this Monster actually is. With the subtitle on the film being “Day of the Beast”, they sure as hell give us one. And actor Krueger is a tall man, so the way he kind of towers over the rest of the cast makes him much more menacing. It felt as if there were several different influences running through this film. It really was a modern monster film that felt like it was paying tribute to the legacy of Hammer, as well as trying to stay true to the original source material. Pretty ambitious for a little film but that is why this film works. It doesn’t end up being just another “Frankenstein” film, it aspires to be more.

My main complaint was the beginning. The first fifteen minutes or so kind of felt a bit out of place. It didn’t really fit in with the brunt of the story. It’s quite possible that I had missed something (viewing conditions are not always optimal when you have a toddler and a teenager) but it just felt like an excuse to up the body count. Once we move into the main story, that’s when things start rolling. The Monster is basically indestructible. Also unique to this story is how he can basically regenerate after being injured. Victor admits to regenerating the flesh, but that something else, a force, drives within the Monster, something he was not responsible for creating. I wasn’t exactly sure where the film was headed. Once I thought I had it pegged, it swerved off into a different direction and caught me a bit off guard. The film mostly takes place in one location and the cinematography is also rather good. The effects were effective and there is actually quite a lot of blood for a “Frankenstein” film. We really don’t sympathize much with this version.

“Frankenstein: Day of the Beast” pretty much follows the look and style of a Hammer film. It stays true to the source while creating a much less sympathetic creature and showing us just how brutal he can be. The story is easy to fall in to and the end has a nice little twist. I’m giving the film *** out of 5 stars. Much better than I had anticipated though there was some room for improvement. I will have to say though, bloody good job. 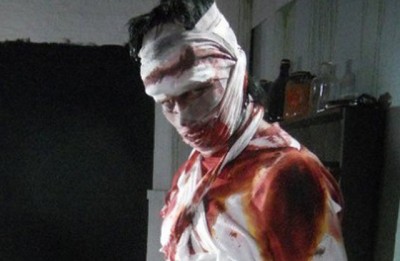