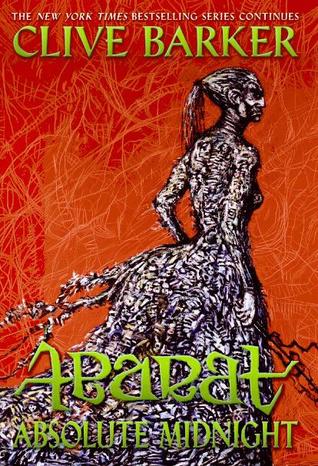 Here was the mystery of creation, played out on a field of dirt and desperation. Candy could see it, this mystery. It was happening all around her. Out of the common earth of living beings, fragile and afraid, came the extrodinary forms of the glyph beyond conceiving of any single mind. She heard the voices of her fellow prisoners, daring to hope aloud; one voice whispering a second; two voices whispering a third, fourth ad fifth: I dreamed this…

We’re not dead yet.

Here’s a problem with much of the fantasy I come across: it lacks a distinct feel of the fantastic. Sure, there are usually dragons, elves wizards, dwarves, trolls and the like. Magic swords. True, abiding love that lasts forever. Admittedly things that simply do not exist in the reality I occupy, but they are expected bits of fancy and rarely possess any true sense of spectacle and imagination. Then Clive Barker walks into the room saying, “You all may know what a Halfling is, but what the hell is a Geshrat, eh?”

In this third book of the planned Abarat quintet, we find our resourceful, if oddly named, Candy Quackenbush recently returned to the Abarat (an archipelago of 25 islands, each dedicated to an hour of the day plus one that exists outside of time, for the uninitiated) from the ruined remains of her home town, her head full of the spirit of the slain Princess Boa. Of course, while she endeavors to free herself of this interloping consciousness, the Queen of Midnight has begun to enact her plan to envelope the whole of the islands in darkness. As bad as the hag of Gorgossium may be, deeper terrors guide her from behind the veil of her own dark purposes and they do not wish well for the colorful denizens of the Abarat.

I have to admit that, sadly, I was not familiar with the series prior to this point. However, it is a testament to Barker’s skill that I was effortlessly brought into a tale nearly halfway finished and that the “catch up” moments required in any part of a larger narrative were woven seamlessly into the present tale. Sure, I was dropped in like a squalling babe fresh from the womb, but my perfectly reasonable confusion was dealt with summarily.

As fans of Barker’s other broad, spanning cycle (oh, how I wait to again swim the waters of Quiddity) will tell you readily, this is a man that will push the bounds of imagination and this book is fantasy in the truest sense of the word. Nothing here exists or has existed in any form I have run through and the experience is giddy, if a bit mind bending. Sewn-up sacks filled with sentient mud. An entire family of brothers stuffed into a single body and fighting amongst each other constantly (one of whom, John Mischief, is referred to as the shortest among them-I’m still trying to wrap my brain around that one). An evil witch who sews the souls of her victims into her dress. An actor named Legitimate Eddie. Self devouring words like Abarataraba. There really isn’t a good way to convey any of this without seeing it for yourself.

And the sights… Normally, I would only recommend the hardback editions for book snobs and completists like myself but this one comes with something worth much more than the heftier weight: the interior artwork Barker created to accompany the story. When dealing with so much outlandishness, the images do wonders to ground the experience. Plus, they are a delight to behold. Something that combines the visual textures of oil, chalk and crayon in vibrant splashes across the page. I have a tough time recalling when the $25 was more worth it.

None of that touches on the journey we are taken on, through the harrowing experiences and bright, incongruous bravery experienced between these pages. Things do get bleak indeed along this path, not just for Candy and Co., but for the whole of the Abarat and the proceedings are not kind upon the heart and eyes. Still, throughout it all there runs a thread of resilience and hope that was pleasantly surprising from a man whose early work was known for its cynicism and nihilistic tendencies. We may not be through this yet, not by a long shot, and the sun will never be as bright again as we remember but, as the quote at the beginning says “We’re not dead yet.”