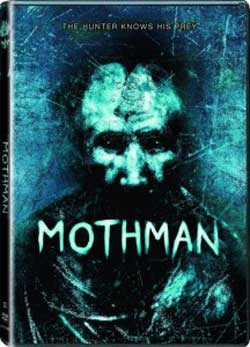 A group of friends band together to hide the truth about a mutual friend’s tragic death. They soon discover that an evil entity is in pursuit of them.

Does anyone remember a film called “The Mothman Prophecies” from a few years back? It starred Richard Gere & Laura Linney and it purported to tell the true story of the town of Point Pleasant, West Virginia and some supernatural occurrences that took place there a while back. Up to that point I had never heard of the legend of the Mothman and the film, while a bit slow at times, was effective enough to make me sit up & take notice of this purported phenomenon.

Now we are presented with “Mothman”, a new film that tries to tell the same story but instead of telling it in a sensible, intelligent fashion as “The Mothman Prophecies” did, it tries to force a few different films into the established formula. And in doing so it turns what could’ve been a fairly decent little movie into one that made me scratch my head and wonder….”What if”? 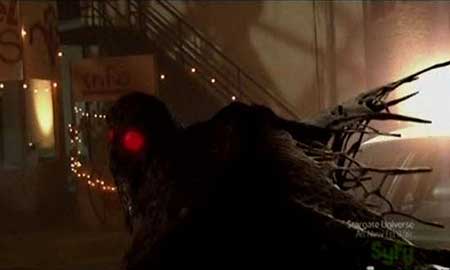 The plot concerns a group of twenty somethings who are enjoying some time swimming in a lake as the film begins. One of them, Jamie, is a bit younger than the rest of them & isn’t wanted around. They decide to tell him the story of the Mothman to creep him out a bit before returning to the lake where they pull him under the water repeatedly to scare him & (Hopefully) chase him back home. But the plan goes awry & Jamie drowns. Amazingly, one of the witnesses to this is Jamie’s brother Jared. And he & the others agree to make Jamie’s death look like an accident so as not to jeopardize their individual futures. So a large rock is picked up & passed around to each one of them to bash Jamie’s head in. This way, all of them are liable & will go down if one of them should break down & tell the truth.

Flash forward ten years later & all of them still live in the town of Point Pleasant, WV. All of them except for Katherine (Jewel Staite) who has become a successful journalist based in Washington. Reluctantly she returns to the town to report on the annual “Mothman Festival” and it’s here she reunites with the others who have kept their secret for the past decade. Unfortunately when Katherine arrives, her friends start dying one by one and apparently The Mothman is the culprit. But he’s just a local legend…isn’t he? 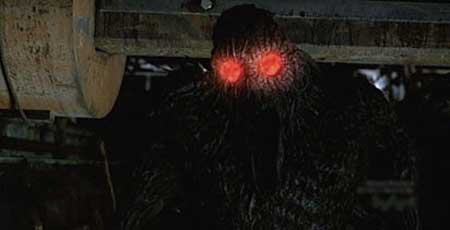 Nope. He’s real & we find out that his purpose on Earth is to avenge the deaths of those who have been murdered & haven’t received justice. Sorta like “Ghost Rider” I suppose. But Johnny Blaze (As dumb as that movie is) was cool to look at. Our Mothman here looks like a Rorschach test with wings & big red eyes. Believe me when I say it’s not as cool looking as it sounds. His origin is explained to the group by the one man in town who knows what’s really going on and knows how to stop it from happening again. Of course the fact that he has no eyes (He gouged them out himself to protect him from the Mothman…long story) doesn’t seem to warrant the trust everyone immediately puts in him. But this is a movie right? People do stupid things in movies don’t they?

They sure do, but the script to this film has everyone doing the stupidest things imaginable. It also takes pains to point out the Mothman’s methodology only to completely ignore them later on down the line. For instance, it is established early on that he can only enter our living space through a reflective surface (Mirrors, shiny metals, etc..) but towards the end the fuzzy guy just shows up whenever & however he pleases. The script claims that sunlight repels him as well. I guess they never told him that as he makes numerous attacks during daylight hours with no ill effect on him at all. It’s scripts like this that make me wonder if the actors even read them before committing to a role.

I’m not being naive here either. I understand a part is a part & there’s no such thing as bad publicity. I would imagine that all of the actors in this film were glad to get a paying gig that would be seen by millions of people (It debuted on the SYFY channel). But really people, wouldn’t you at least question some of the logic of the script? It wouldn’t have taken much to do a little doctoring on it just to make it more sensible. At least as sensible as a film about a giant Mothman could be anyway. But I’m guessing they wrapped this sucker up in two weeks tops. Not much wriggle room in there to give it some modicum of sense. At the very least they could’ve tried to adhere to the rules that they set in the first half of the film. 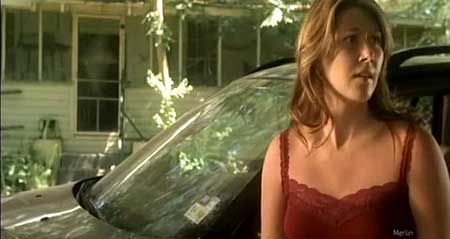 But that would be too hard for them on their shooting schedule so they just went for it. One by one the group falls victim to the titular beastie until only two are left and they manage to destroy our fuzzy, flying, red eyed dude at the end. Or do they? This movie actually might have set a new standard for the stupidest, most nonsensical ending of all time. It’s really that stunning. It makes absolutely no sense whatsoever. It’s as if they realized at the very end of the film that they had a turdblossom of epic proportions here & for all that, they still had no real ending. So they just tacked on something that they figured might be looked at as cool as long as no one was paying attention to the previous 88 minutes or so. But I was paying attention guys. As much as I hated to do it, I paid attention. And my jaw hit the floor as I watched your “Ending”.

You might think that I hated this movie judging by the last few paragraphs but quite the opposite, I sorta liked it! The acting is actually pretty strong (A lot stronger than needed for dreck like this). The CGI effects are endearingly awful & the script? Well, I kind of enjoyed pointing out all of it’s flaws & the way it changed it’s own rules to fit whatever scene they needed to finish as it went along. They had gumption while they were filming this crap, that’s for sure. Director Sheldon Wilson manages to keep the film chugging along (It’s a lot of things but it isn’t boring) at a nice clip. The credited screenwriters are Patrick Walsh & Sonny Lee. I’m figuring one of them wrote the script & the other made the ludicrous changes to it afterwards. I don’t think either one of them will take credit for the ending though.

I didn’t say too much about the story because a film like this needs to be seen to be believed. Telling you about it doesn’t do it justice. It wants to be a mash up of “I Know What You Did Last Summer” & your garden variety creature feature. Why, I couldn’t tell you but I can say that when it was over I did have a big cheese eating grin on my face that only a very special kind of bad movie can bring out of me. It pretty much fails miserably on all accounts but dammit…I was entertained by this f*cker! That’s the only reason I’m giving it a two out of five shroud rating. It deserves a zero, of that there is no doubt. But I’m a sucker for craptacular stuff like this. I can’t recommend it to you unless you like this kind of junk as well but if you do, you will be dumbstruck by the awfulness of it all. Sometimes that’s enough for me and this is one of those times.

Mothman is now available on DVD per Lionsgate Entertainment