Welcome to 2009, the year that will own your ass. Yeah, that right, kids. We’re all gonna get the short end of the business end on this one. With that in mind, let’s kick it off the way it should be – in style – by opening the door to Music Rm. 138, my favorite subject room next to Foolish Rm. 541.

I love music. You should too. If you don’t have music in your heart, you’re missing the pulse of life itself. There isn’t a genre out there that doesn’t have something fantastic to offer, and I believe that. From Classical Composers to Depression-Era jazz, from Surf Instrumental to Outlaw Country, from Punk and New Wave to Goth and Metal, right on through to the hip-hop the culture that surrounds us now; It’s a vast wall of sound with something for everyone. If you think music sucks, then you suck. It’s pretty much that simple. I really doubt there’s anyone out there with the balls to make such a sweeping statement, but you never know.

You know what else kicks ass? Of course you do, you’re on horrornews.net. Yep, that’s right – Horror Movies. While certainly not the only genre worth mentioning, it is the only one we’re here on this website to bullsh*t, rant, critique and argue about. People who don’t love horror movies – and I feel comfortable talking sh*t on these folks, ‘cause I seriously doubt they’re reading this – are straight up pussies; pink-o commie bastards, the whole lot, and as un-American as truth and justice. But that ain’t you. You love the madness. So let’s get to it.

I like rap. I really do. I don’t wear a wave cap, or own any Fubu Jeans (do people still wear those?) I’m as white as they come. Well, maybe not that white, but let’s just say Langdon St. ain’t such a safe place for a scrawny little wood like myself. I love language however, particularly the English ones. I love word craft, puns, riddles, double entendre and mad-libs. No music offers such fun for the language nut than good old fashion, red white and blue rap. There’s good stuff out there, you just gotta dig a little.

But as mentioned above, I also love horror movies. So when you combine the two, I’m in for a treat. Fans of Necro know what I mean. Sure, he ain’t the best, but he’s talking some straight up horror movie sh*t and that’s badass. During an impromptu beat boxing, free-style outburst after karaoke the other week, Mikey Rots and myself were introduced to a young lyricist named “Jason,” who wished to don the Voorhees hockey mask on stage and rap about Crystal Lake. Little did he know just who the two white asshole beat boxing for him were. Needless to say, Rots flashed his tattoos and we took him with us to get some coffee and pancakes at Mel’s Drive-in.

Which brings me to today’s madness. A little bit of both of these worlds, this clip goes far beyond the reaches of rap and horror and into the realm of hands down awesomeness. Created two gentlemen from the group The Anomalies, Mouthmaster Murf and his cohort DJ Mayhem are geniuses. They’re not content to just drop a reference. Nope, these fools gotta rap the whole f*cking plot or it just ain’t worth it. Mayhem also uses the score to wonderful hip-hop effectiveness. They’ve got two of these bad boys floating in cyberspace. There’s the one below, and another one for “Robocop.” I love the Robocop one for sure, but it was about 4 minutes longer and “Robocop” is arguably much less a horror film the “Predator.” Hell, there are some people out there who’d give you static for calling “Predator” a horror film, and while they wouldn’t be wrong, they’re certainly not right either. It’s just a kick ass ‘80’s action flick, with a creature and some hardcore gore. Now, you ask The Professor and he’ll tell you that creature + gore galore = horror movie. Well, at least mostly. It certainly doesn’t equal French New Wave.

If you’ve never seen “Predator,” then God help you. Seriously. Get off the Internet right now and go watch “Predator.” I don’t know what the hell you’re doing on this site if you haven’t seen “Predator.” If that’s too much to ask, then just watch the clip below. You’ll get the whole plot in less than 7 minutes and with some sweet as rhyming samples to boot. If you enjoy this, check out the “Robocop” one. It’s just as awesome, if not a maybe a little more. 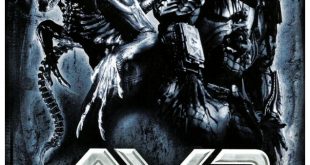