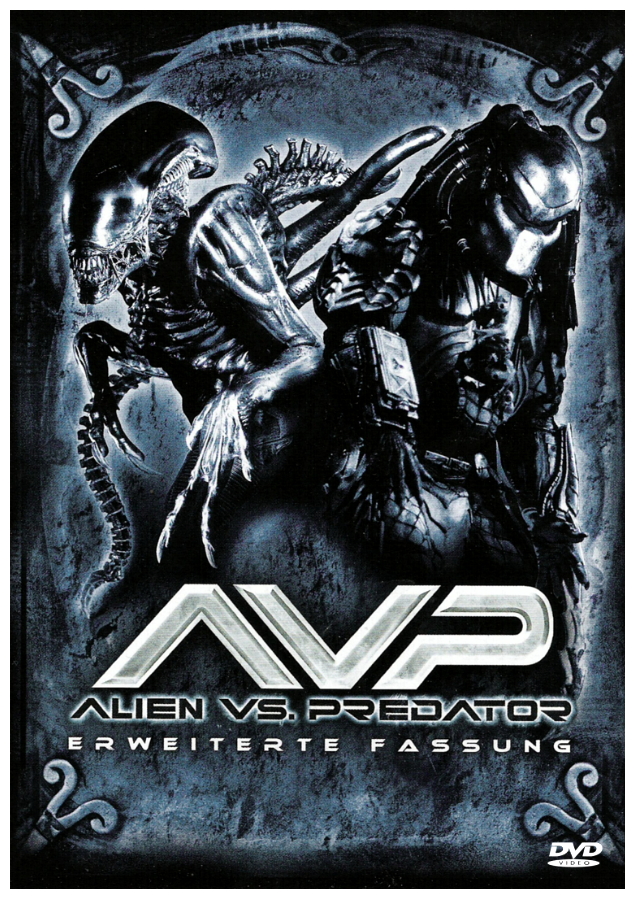 “Thousands of years ago, huntsmen (the predators) found planet Earth. While there, they trained humans to build and were reverenced as gods. Every century, these gods would return to Earth and, when they did, they expected a sacrifice. Humans were used as livestock to breed the vital prey (the aliens). The predators would now combat the prey to establish themselves creditable or to carry the mark of becoming adults. If the huntsmen (the predators) find themselves losing the battle, they would then self-destruct in order to make sure that nothing survives. Billionaire Weyland thinks that he has exposed the remains of an early pyramid temple, that is a cross between the Egyptian and Aztec pyramids. It was hidden under the ice of Bouvetøya Island in the Antarctic Ocean. Now, what industrialist Charles Weyland and his comprised team of engineers and scientists didn’t know was that the predators have set a trap for them. They have lured them to this remote location using a heat beam picked up by Weyland’s satellite. This was done to make sure that the aliens had hosts to breed in. As the humans battle both predators and aliens, predators and aliens also have a battle of the species which will leave only one race standing.” (courtesy IMDB)

The idea of pitting the killer extraterrestrials of Alien (1979) against the ultimate hunters of Predator (1987) originated with the 1989 comic book Alien Versus Predator, and was hinted at when an alien skull is seen amongst the predator’s trophies in Predator 2 (1990). 20th Century Fox purchased an adaptation of the comic by screenwriter Peter Briggs as early as 1991 but refused to green-light the project until after the release of Alien Resurrection (1997). Predator producer John Davis was put in charge, who rejected Briggs’ script outright and demanded the film be set on present-day Earth. Guillermo del Toro was first to be offered the director’s chair, but chose to make Hellboy (2004) instead. Roland Emmerich was next, but he was too busy making The Day After Tomorrow (2004). David Twohy was approached but he was preoccupied creating his own franchise entitled The Chronicles Of Riddick (2004). Brett Leonard, Chuck Russell, Joe Johnston and Robert Cohen were also considered at one point or another. 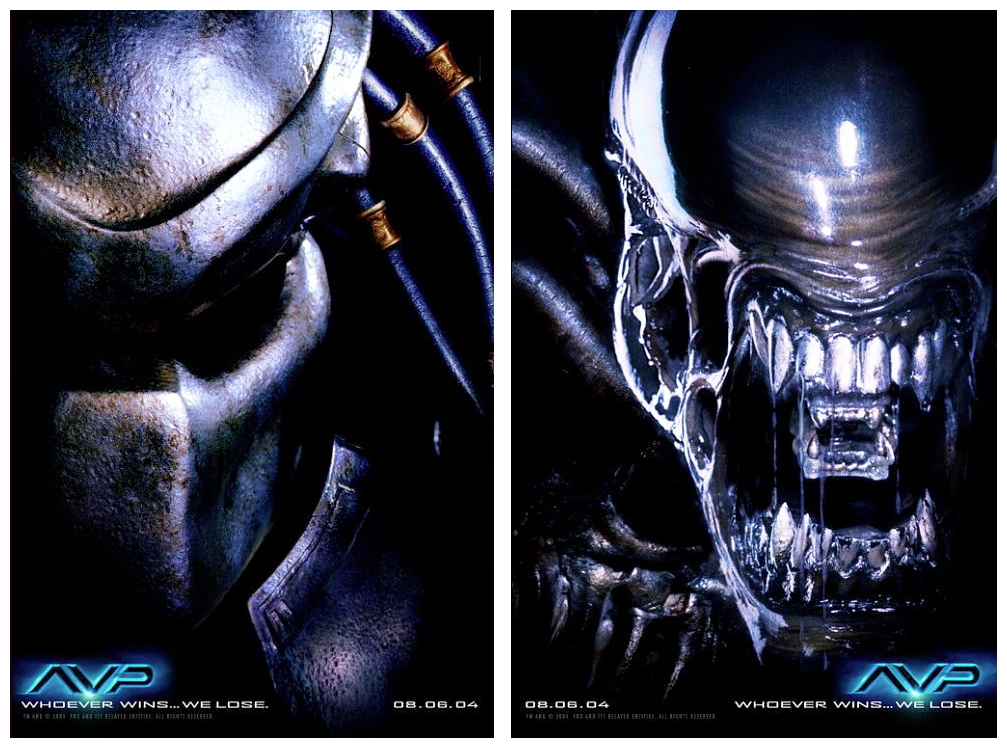 Then along came fanboy filmmaker Paul W.S. Anderson who pitched a story he had been working on for more than eight years which impressed Davis no end. Several of Anderson’s efforts have become personal favourites of mine, guilty pleasures you might say. Winner of absolutely no Academy Awards, he never really seemed to crave such acclaim, and simply concentrates on efficiently delivering a couple of hours of entertainment and little more. Sometimes it works – Mortal Kombat (1995), Event Horizon (1997), Resident Evil (2002), DOA Dead Or Alive (2007) – and sometime it flounders – Soldier (1998), Drift (2006), Death Race (2008). His obvious affection for video games and the Alien franchise made Anderson the perfect choice for director: “All of the earlier scripts had put the predator in the world of the alien, out into space in the far future. My story situated the alien in the contemporary Earth world of the predator, creating the opportunity for the alien to interact within the world as we know it. It was a fresh idea that excited the studio.” 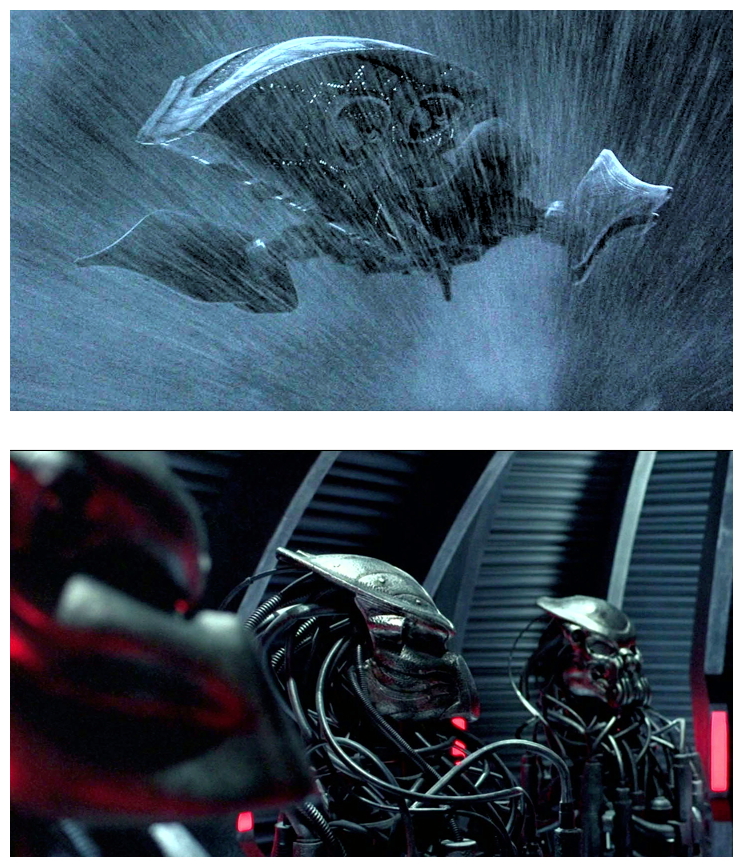 “There had already been four Alien movies with the creature running around on spaceships, and you can do spaceship corridor chases only so many times before they become a bit generic and boring. When my friends and I went to see Aliens (1986) we all just knew that the alien was in the cat from the first movie, so we were all waiting for the cat to explode with the chest-burster during that opening sequence at the gateway station. Of course, that didn’t happen, although Jim Cameron made you think it was going to happen. Then when Alien 3 (1992) came out the trailer had the tagline, ‘This Christmas you’ll discover that on Earth, everyone can hear you scream’. So my friends and I were thinking, ‘Ah, great, finally! The aliens are coming to Earth!’ But, of course, it didn’t happen in Alien 3 either. In Alien Resurrection (1997) they kind of got to Earth by the end of the movie, but you didn’t care by then. Just remembering how excited I’d been by the prospect of the alien being on Earth, I thought this story idea could generate that sort of excitement.” 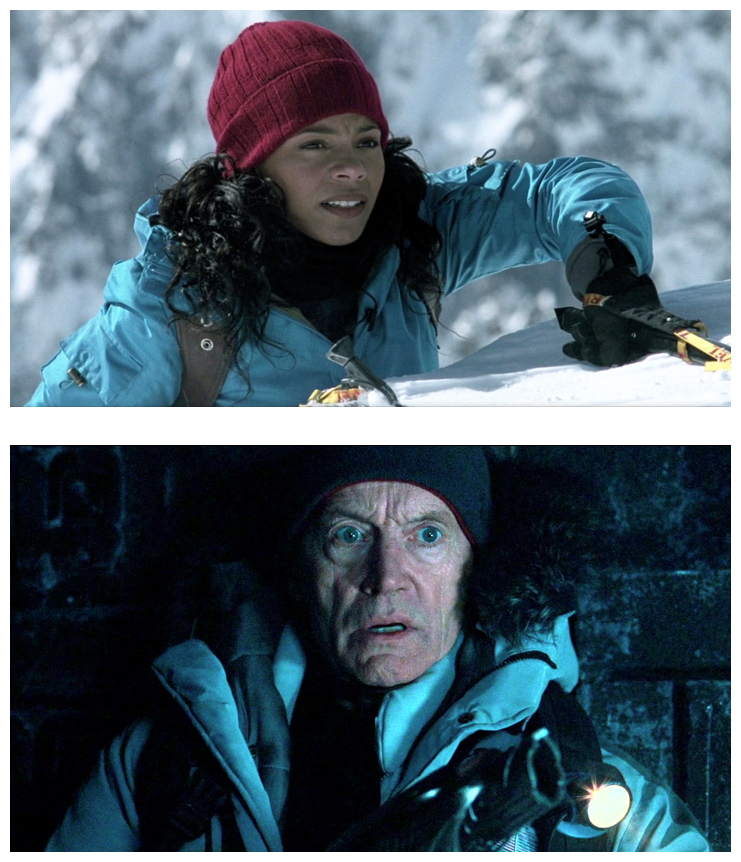 All his knowledge and past experience came to bear on AVP Alien Vs. Predator (2004) as Anderson began planning the production, refining the script and developing visual concepts, including reconsidering the design of both the aliens and the predators. The look of the aliens in particular had evolved from one film to the next, as each successive director put his own stamp on the original design. Anderson’s inclination was to return to that first alien for his film: “Giger’s design was genius, and my attitude was don’t f*ck with genius. Aliens (1986) is an incredibly entertaining and well-crafted film, and I’ve probably seen it 150 times but, in terms of the alien itself, I didn’t think it looked as good as it had in Alien (1979). I also wasn’t keen on the dog-like look of the alien in Alien 3 (1992). In Alien Resurrection (1997) the aliens looked more like beasts than the biomechanoid that Giger had created. For our movie, we wanted to return the aliens to that dark, oily, biomechanoid that Ridley Scott had portrayed so well in Alien.” 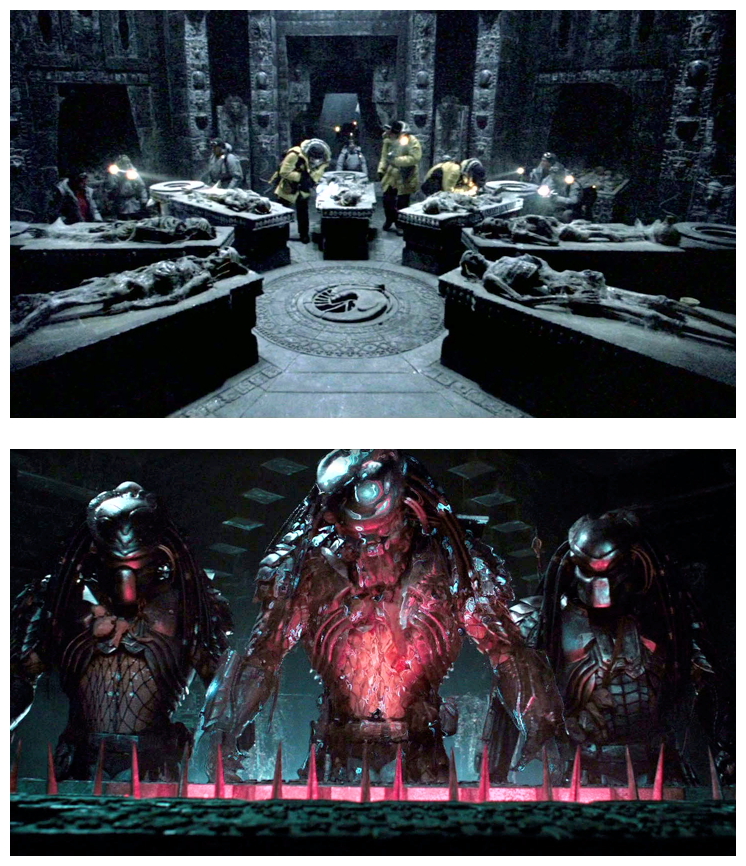 Anderson scattered references to the individual franchises right from the opening shot of what appears to be a silhouette of the alien queen, which is revealed to actually be a satellite detecting mysterious underground activity in Antarctica. A group of scientists commissioned by industrialist Charles Bishop Weyland (Lance Henriksen) is sent to investigate said mysterious underground activity. The team, led by guide Alexa Woods (Sanaa Lathan), discovers an ancient subterranean pyramid in which a captive alien queen lays eggs producing progeny that serve as the ultimate prey for adolescent predators executing a rite of passage into adulthood (an idea presented in the very first issue of the Alien Versus Predator comic). Trapped inside the pyramid, the human team is caught in the crosshairs of a battle between the aliens and three recently arrived predators. 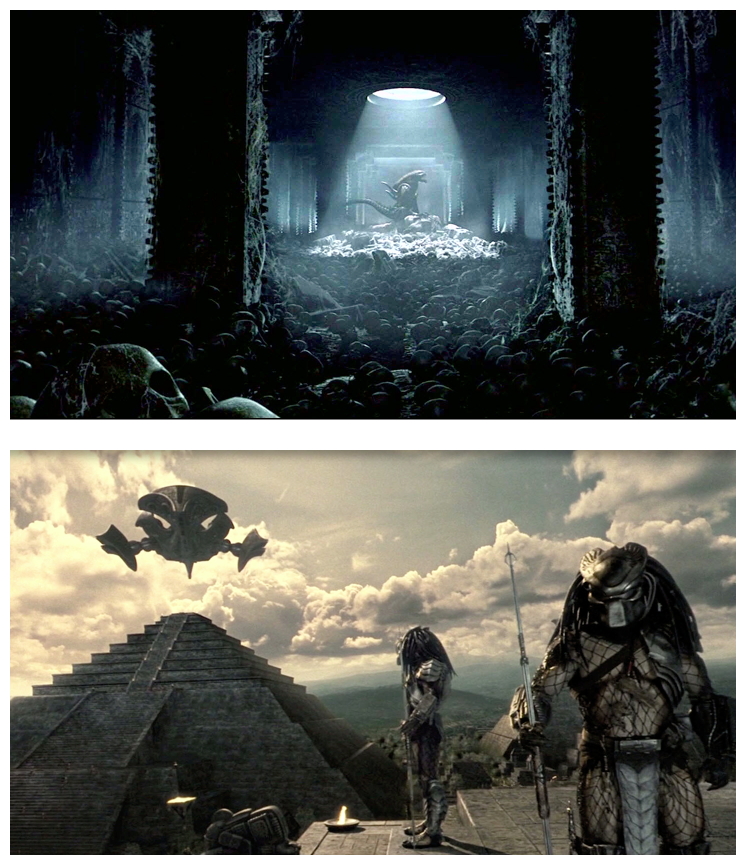 Through translation of the pyramid’s unique hieroglyphs (designed by Richard Bridgland), Alexa and Sebastian (Raoul Bova) learn that the predators have been visiting Earth for thousands of years. It was they who taught early human civilisations how to build pyramids and were worshiped as gods (taking a page from Erich von Däniken‘s 1968 book Chariots Of The Gods). Every hundred years they would visit Earth to take part in a ritual in which several humans would sacrifice themselves as hosts for the aliens. If overwhelmed the predators would activate a self-destruct device to eliminate the aliens and themselves. This is why the current predators are at the pyramid, and that the mysterious underground activity was meant to attract humans for the sole purpose of making new aliens to hunt. Alexa and Sebastian decide that the predators must be allowed to succeed in their hunt so that the aliens do not reach the surface. Unfortunately, Sebastian is captured by an alien, leaving only Alexa and a lone predator nicknamed Scar (Ian Whyte) to fight against the aliens. 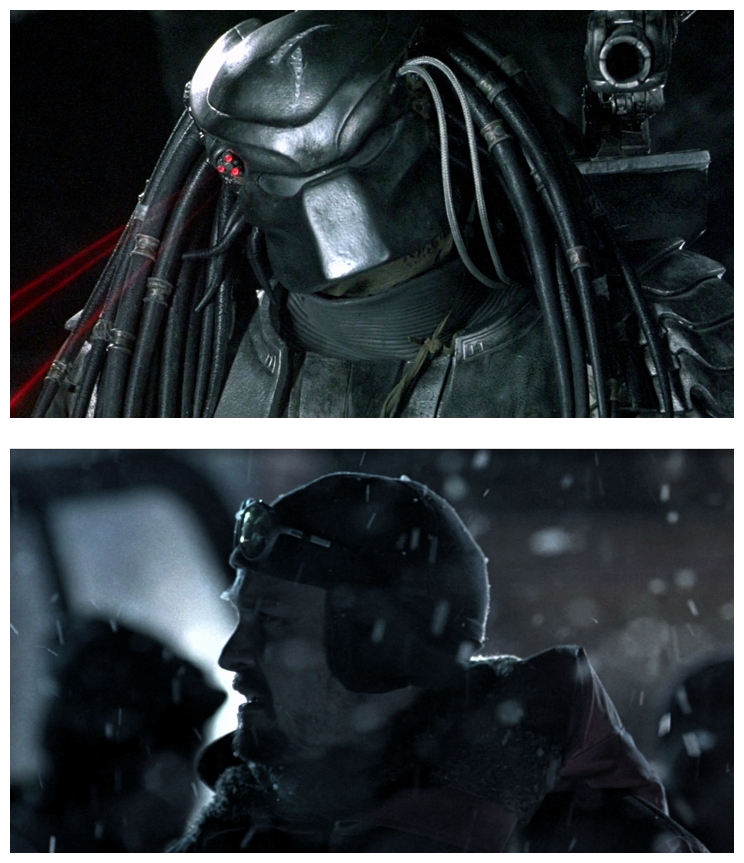 The two form an alliance and use a self-destruct device to destroy the pyramid and the remaining aliens. The pair reach the surface, where they battle the escaped alien queen (the most sophisticated animatronic ever built at the time with twice as many moving parts as the Jurassic Park Tyrannosaurus Rex). They defeat the queen by attaching its chain to a water tower and pushing her over a cliff, dragging the queen to the ocean floor. Scar, however, is impaled by the alien queen’s tail. Soon a predator spaceship uncloaks and several predators retrieve their fallen comrade, presenting Alexa with one of their spear weapons in recognition of her skill as a warrior. The predators jump back into their ship and take off, unaware that Scar has an alien-predator hybrid chest-burster ready to erupt at any moment. With virtually every member of AVP‘s cast and crew a fan of the franchises, there was a huge sense of self-imposed pressure to live up to the legacies of those watershed films. 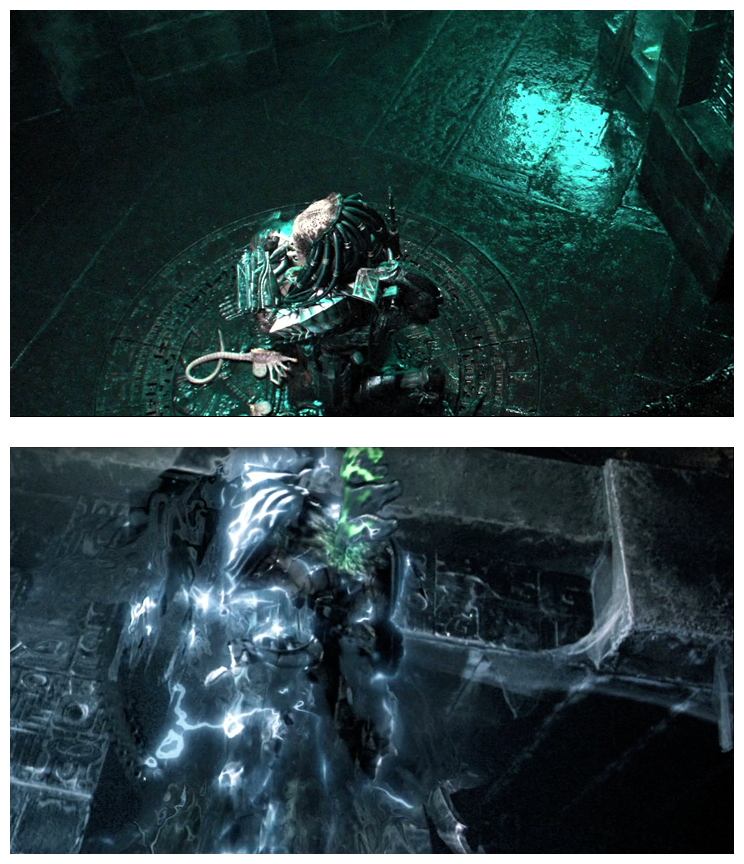 “The Alien franchise in particular has produced some great movies. Horror movies don’t get any better than Alien (1979), action movies don’t get any better than Aliens (1986). It was very exciting to be a part of that tradition. Every day, people would come to the set, excited. ‘We’re making an Alien movie! We’re making a Predator movie!’ But that elation would inevitably be followed by, ‘Oh my god, we’re making an Alien movie, we’re making a Predator movie’. We put a lot of pressure on ourselves but, hopefully, it’s paid dividends.” It certainly did pay off. AVP became the most commercially successful movie of both franchises, grossing over US$172 million on its initial release, more than three times its original budget. Filming in Prague kept costs to a minimum, where thirty different sets were constructed at a tenth of their normal cost if built in Hollywood. Another cost-cutting device was allowing only six-and-a-half months for both shooting and post-production, the shortest schedule of any major motion picture that year. 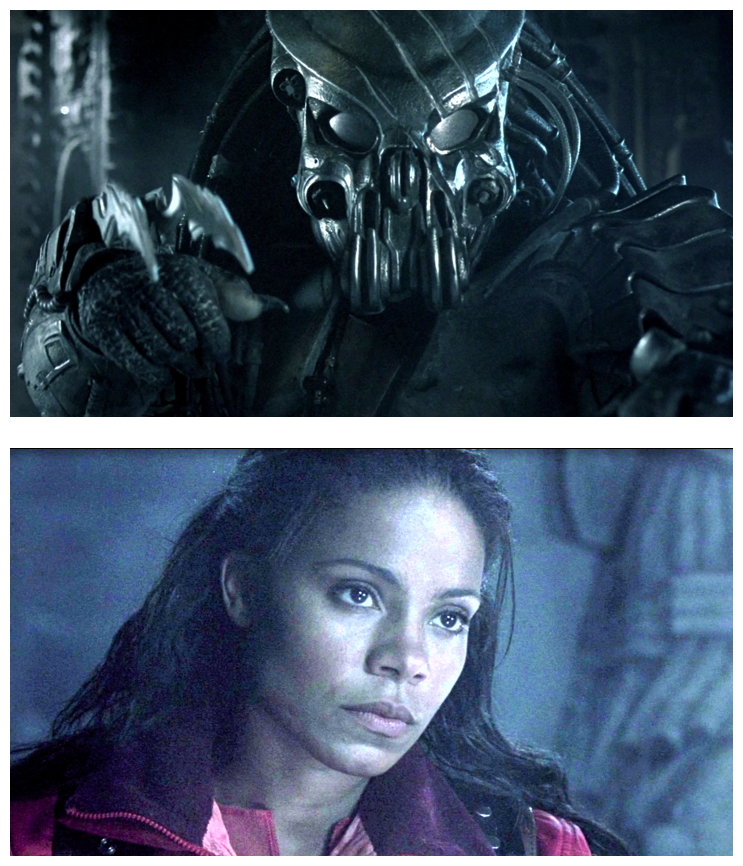 “All movies are being done faster. Schedules that were unheard of five years ago are now the average span of post, and that post continues to shrink. No doubt Alien Vs. Predator will be used as a stick with which to beat other unfortunate filmmakers, because we did it in a very short period of time, and the movie still looks great!” AVP Alien Vs. Predator was unfairly panned by both critics and fans due to the pre-release hype, but the film feels like it belongs, it has a great premise, good cinematography, some amazing effects and a fine soundtrack. Anderson successfully brings the franchises together, respecting concepts from both. I’m not exactly sure why there is such hatred for his work (particularly his video-game-based films) but to compare him to the exploitative Uwe Boll is just plain cruel. He may not be Ridley Scott, James Cameron or John McTiernan, but Anderson still manages to pull off the unenviable task of bringing these two cinematic monsters together. 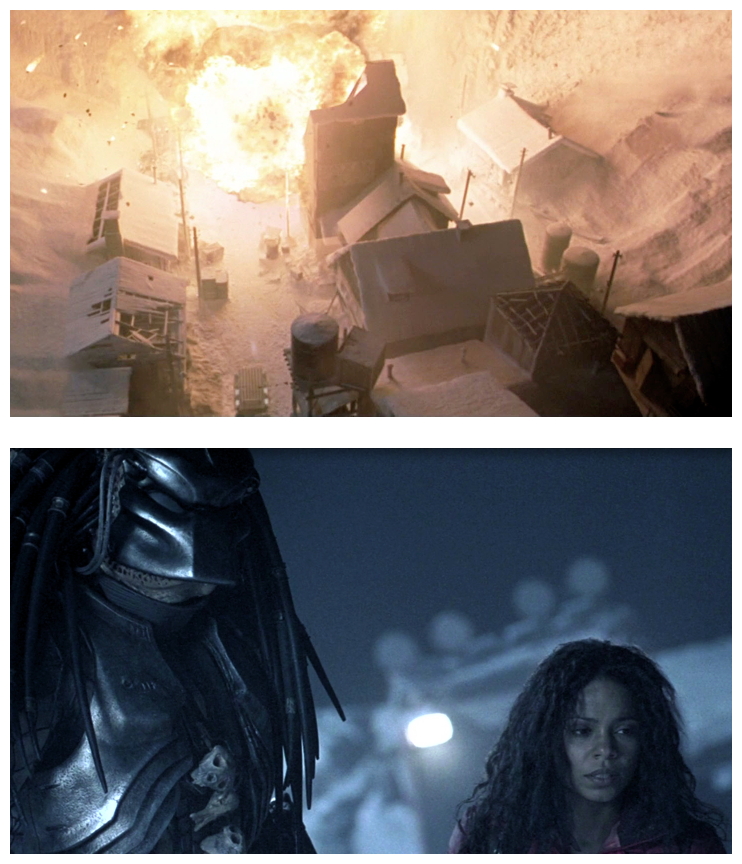 The strong cast includes the aforementioned Sanaa Lathan and Raoul Bova, but Carsten Norgaard (as Quinn) and Tommy Flanagan (as Verheiden) are killed off far too early. Lance Henriksen becomes the second actor ever to be killed by an alien, a predator and a terminator in three different films (Bill Paxton was first). Admittedly some of the characters lack development but you know most of them are going to get wasted anyway so character development isn’t really that necessary (we’re here to see predators battle aliens, remember). The editing may be a little choppy in places but the predators and aliens look damn good. Are some scenes over the top? Absolutely, but this (like the very first Alien film) is essentially a B-grade film with an A-grade budget. If you’re a fan of either franchise you really should give this one a go. I’ll now bid you a good night and look forward to your company again next week when I have the opportunity to raise the hackles on your goose-bumps with more ambient atmosphere so thick you could cut it with a chainsaw, in yet another pants-filling fright-night for…Horror News! Toodles! 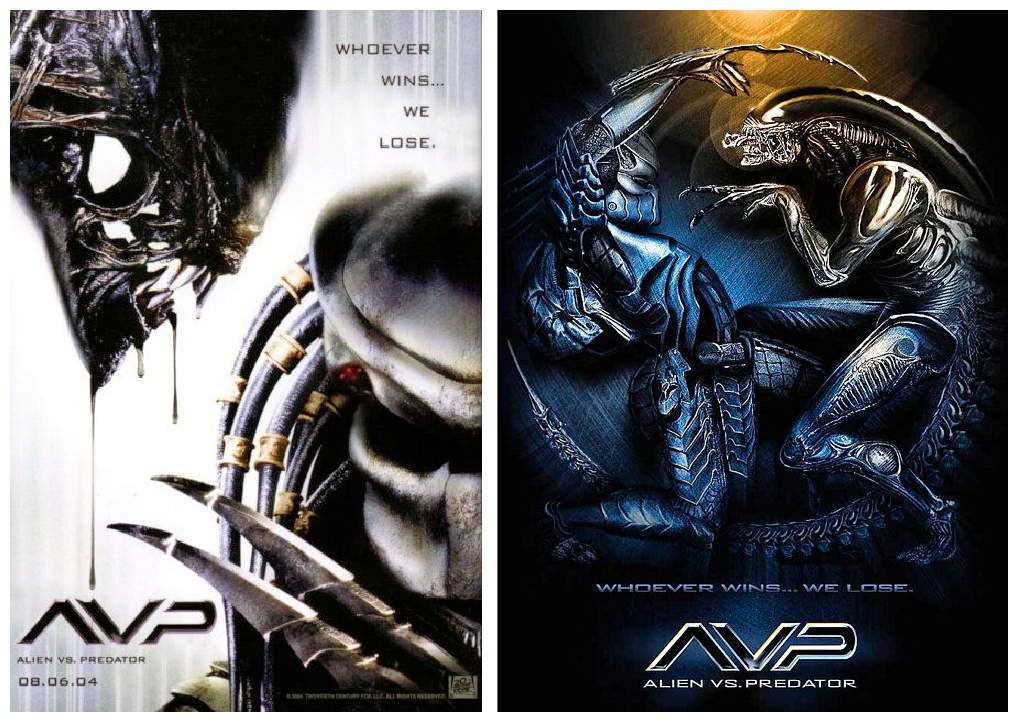