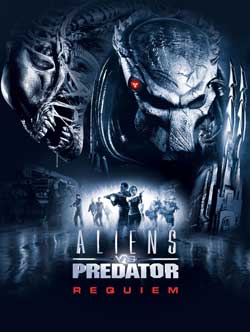 Warring alien and predator races descend on a small town, where unsuspecting residents must band together for any chance of survival.

Oh Boy. So many people really hate this movie. I just re-watched the Unrated Version of AVP-R with my 14 year old who is “discovering” all of the Alien/Predator films. He loved it of course but then again he’s a 14 year old boy who likes anything with blood and boobs. I, on the other hand, enjoyed the time we spent together but the film is still a mess. AVP-R was directed by the Strause Brothers who also did the abysmal alien invasion movie “Skyline” and have provided Special FX visuals for some of the biggest effects laden films like Avavtar, Battle LA and The Fantastic Four – Rise of the Silver Surfer. The film was released in 2007 around Christmas time and it opened to mostly negative reception.  Unfortunately it’s warranted. 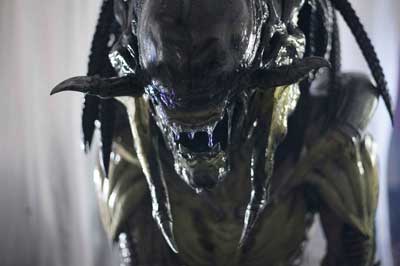 The movie picks up right after AVP and we watch as the “Hero” Predator from the previous film lies in state on their ship while leaving earth’s orbit.  Eventually the Predator, which was impregnated off-screen by a facehugger in AVP, has a chestburster alien break through his chest to wreak havoc on the ship that seems to be returning home. Somewhere around Saturn the hybrid PredAlien is seen leaving in  a pod ship in order to return back to earth. Why? Who knows? Maybe to impregnate all of the potential humans they left behind. The mothership makes it to the Predator homeworld and another Hunter / Leader Predator watches all of the on board footage and realizes that the operators of this ghost ship of sorts have been decimated by a hybrid PredAlien. He gets all of his weapons and tools together and takes off for Earth to put down the renegade monster that has the ability to impregnate hosts with baby aliens. He eventually reaches earth but not before the PredAlien lets some facehuggers loose in the woods of Gunnison, Colorado.

An unwary Dad and his son are hunting in the very same woods and they eventually fall prey to them in a tense and shocking moment. I say shocking because the poor kid not only sees his Dad get a facehugger to his face but he as well gets one in his kisser. It still gets to me whenever a kid is shown in peril so it was an uncomfortable scene. The actual chest burster scene with the kid is even more brutal so I have to give The Brothers Strause credit for not holding back on the violence and gore. After the PredAlien gets comfortable in the sewers of Gunnison and the 2 new born aliens tag along then we get introduced to our ensemble of cardboard cut-out characters. There is Sheriff Morales played by John Ortiz (Carlito’s Way) Ortiz plays the law here kind of lazily and uninteresting. He picks up ex-con Dallas (Steven Pasquale) who returns to get back together with his brother, Ricky played by Johnny Lewis. Ricky is kind of a wild kid like his older bro and Morales tries to let Dallas know that his brother needs some guidance. The by the numbers intrros continue as Ricky is seen as a lonely and neglected teenager. He works at a pizza shop and ends up delivering pizza to a girl he has a crush on and her friends. One being an asshole Jock (Original Huh?) named Dale and his 2 stupid friends. Ricky, not one to take an insult gets the shit kicked out of him by said jock and his stupid friends. He gets his car keys thrown into a sewer and races back home to get a baseball bat to mete out some justice but Dallas is awaiting him and talks him out of it. Ok, still with me? Good. 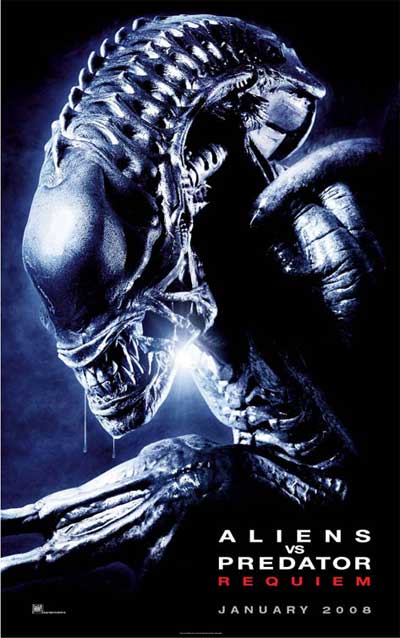 As the film progresses the predAlien finds more people to impregnate. Some homeless men who inhabit the sewers and slowly but surely the alien population continues to grow. At this point I’m starting to get curious as to where we are headed with this story. Not one character with the exception of Dallas is remotely interesting and how fast do the baby aliens grow to maturity? It seems like someone is impregnated and whammo five minutes later we have a full size alien walking around but then again the Nostromo’s alien grew sort of quickly as well but no time duration was ever mentioned. “24” Actress Reiko Aylesworth (All My Children) plays Kelly who is the only other interesting character.  She  returns home to her Husband (Sam Trammell from True Blood) and Daughter after serving her tour in the military. You know quite immediately that she is going to get some hardcore screen time because she’s a soldier. She tries to reconcile with being back home and being a wife and mother all over again. She does an admirable job and her classic soap training gets her by with an above average, if low key, sci-fi performance.

The Alien / Predator mayhem ensues as the hunter Predator tracks down the hybrid. The hybrid has been breeding hosts all over the town and eventually the aliens make their way around to hospitals, power plants and even diner kitchens with the lead Predator in tow.. Meanwhile the Sheriff is overwhelmed by all the violence, murders and missing people. The Feds make their way to the town but not before complete panic and pandemonium occurs. They get cornered and in a very reminiscent scene of Cameron’s Aliens, they get wiped out. Kelly then takes over and yanks a tank from them in order to flee the town. Kelly, Ricky and Dale (Dale’s dumb friends get butchered in the swimming pool) get picked up by Dallas and Kelly at the nearby Recreation center. The hospital impregnation and chestburster scenes are very gory and brutal where we watch a bunch of poor women give birth to not one but three Aliens at a time! 3! Damn.. The film doesn’t lack action but it is a predictable effort and even the alien / predator battles can’t seem to make it all gel. The movie feels disjointed and has the most spotty editing I’ve ever seen in a big budget production of this type. The DP of the film, Daniel Pearl, who actually shot both the original and remake of The Texas Chainsaw Massacre, filmed the action and battles scenes between the creatures way to dark. I don’t know if that was intentional or just a way to cut corners with effects and such. It is frustrating especially if you really want to see the carnage and mayhem in stunning clarity. There are all sorts of quick cuts and decent coverage but we hear the action way more than we can see it. Too bad. 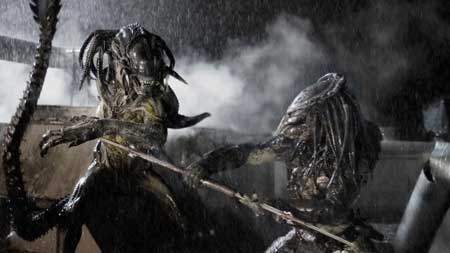 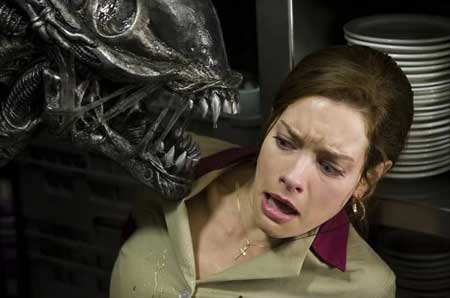 AVP – Requiem, sadly, disappoints. It’s flat, unintentionally comical (The stereotypes like the Jock, The clueless Sheriff and the inept Soldiers don’t help) and never becomes gripping. I get the impression that CGI and Effects were what the Brothers Strause committed themselves to over story, acting and execution. The Camerawork starts out OK but when night ensues I had to turn up the brightness on my TV set. Ugh. Brian Tyler’s music though is ok and never too over the top or repetitive. He actually incorporates nicely, some themes from other Alien / Predator films. Even Alien – Resurrection. So I had no gripe with that. Aylesworth and Pasquale have the hard job of trying to stay above the material and give decent performances despite looking rather lost at times. It’s full of some glaring plot holes (why Colorado?) and is cliche ridden. Like the way the Military and the soldiers are introduced. I really wanted to like this movie and I will give it praise for the effects and the Alien puppeteer work. The make up and costume jobs on the creature are well done but poorly lit. If the DP would have shed a bit more light on the film it would have been immensely better. It screams B Movie and lives up to that designation. I only would recommend it to die hard fans of the franchises. At least it delivers some eye candy but it isn’t sweet.