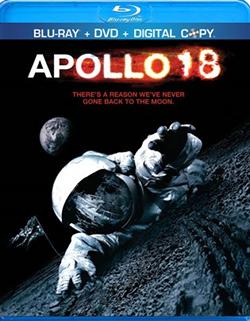 Apollo 18 came and went pretty quick so a lot of you probably didn’t even get the chance to check it out.

No problem, it will be out in Blu-ray before years end.

Anchor Bay has announced a Dec. 27th roll out date and here are all the details.

Anchor Bay Entertainment and Dimension Films announced today the Blu-ray and DVD release of the sci-fi thriller, APOLLO 18. In the same vein as such blockbusters as The Blair Witch Project and Paranormal Activity, the film unearths alleged lost Department of Defense footage to construct a riveting story of the events that unfolded during this covert mission to the moon. Full of tension and suspense, APOLLO 18 blasts into stores on December 27, 2011 with an SRP of $39.99 for the Blu-ray Combo Pack and $29.98 for the DVD.

Officially, Apollo 17, launched December 7, 1972, was the last manned mission to the moon. But two years later, in December of 1974, two American astronauts were sent on a secret mission to the moon funded by the US Department of Defense. What you are about to see is the actual footage which the astronauts captured on that mission. While NASA denies its authenticity, others say it’s the real reason we’ve never gone back to the moon.

The APOLLO 18 Blu-ray and DVD bonus features include an audio commentary with director Gonzalo LÃ³pez-Gallego and editor Patrick Lussier, deleted and alternate scenes, alternate endings, among other bonus features to be confirmed. Note: Special features are subject to change.