SYNOPSIS:
“Lula’s psychopathic mother goes crazy at the thought of Lula being with Sailor, who just got free from jail. Ignoring Sailor’s probation, they set out for California. However their mother hires a killer to hunt down Sailor. Unaware of this, the two enjoy their journey and themselves being together, until they witness a young woman dying after a car accident – a bad omen.” (courtesy IMDB)

REVIEW:
David Lynch‘s cunningly disguised unofficial remake of The Wizard Of Oz (1939) is a rose-coloured road trip tinged with ultraviolence and absurd farce that is as much indebted to Elvis Presley and Roger Corman as it is to Frank L. Baum. A steamy and seedy ode to love, Wild At Heart (1990) is the neglected middle child in Lynch’s rowdy family of attention-seeking progeny. An absorbing story of a passionate affair between urban cowboy Sailor Ripley (Nicolas Cage) and his lover Lula Fortune (Laura Dern), Wild At Heart plays out against a gritty backdrop of in-your-face violence, madness and depravity.

After brutally bashing a man to death in self-defence, Sailor is set for a two-year stint in the slammer. Lovestruck Lula is waiting for him upon his release and the twosome promptly hit the road to in an effort to dodge Lula’s disapproving psychotic southern-belle of a mother Marietta (Laura Dern’s real-life mum Diane Ladd). Hellbent on rescuing her daughter from the clutches of a ‘murderer’, Marietta sends both her detective boyfriend Johnnie (Harry Dean Stanton) and gangster associate Santos (J.E. Freeman) after them with diabolical consequences.

Uncoiling like a fractured fairy tale, Wild At Heart is a nightmarish re-imagining of The Wizard Of Oz, in which mother Marietta is the Wicked Witch of the East, the Lion, the Scarecrow and the Tin Man are replaced by a motley crew of Lynchian weirdos, and ineffectual wish-making is accompanied by the clicking of red stiletto heels. Lynch’s signature shot – centre white road lines that blip past hypnotically in close-up – is tinged with yellow, but this is a yellow brick road that takes our protagonists right over the rainbow and straight into the clutches of a dark angel, the hard-eyed and black-hearted Bobby Peru (Willem Dafoe). 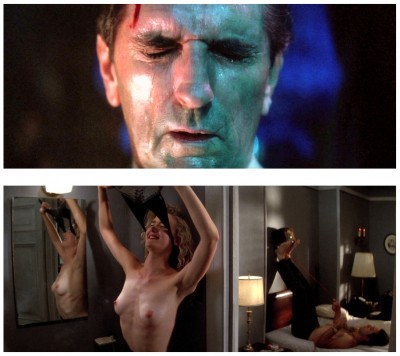 White trash Lula has the wardrobe of a stripper and the pure heart of a girl-next-door, and testosterone-fueled Sailor sports a rocker quiff and resplendent in his snakeskin jacket: “A symbol of my individuality and belief in personal freedom.” The hearty performances of Dern, Cage, Ladd, Stanton and Dafoe are married with memorable cameo appearances from Lynch regulars Jack Nance, Sheryl Lee, Sherilyn Fenn, and his then-lover, Isabella Rossellini.

Much of the racy dialogue and story structure of Wild At Heart is lifted straight from the pages of the original novel by Barry Gifford, who can take credit for lines like “Baby, you get me hotter than Georgia asphalt,” and “This whole world is wild at heart and weird on top.” However, it was Lynch who twisted mother Marietta into such a bitter bitch, fleshed out the evil Santos, and added the nasty subplot that implicates Sailor in the death of Lula’s father. Lynch can also lay claim to the blunt violence that permeates the film: Brawling, car crashes, split heads, severed limbs, and mouths that drool thick red pools of blood as death arrives. It is a visual dance of darkness and light, madness, violence, black humour and jarring noises that collide with the soothing sounds of Chris Isaak, but somehow, from amid the chaos, a heartwarming finale fit for a fairy tale emerges.

Wild At Heart is teeming with Spaghetti Western-style intense close-ups and scenes in which characters bookend the screen as they interact, making it impossible for a pan/scan DVD to do the film any justice. After Dune (1984) was rearranged by Dino De Laurentiis, and Blue Velvet (1986) was gutted by the censors, Lynch now demands final cut on all his films, and performed some last-minute re-editing on Wild At Heart. He told Empire magazine in December 2001: “We had three test screenings of Wild At Heart, and only when I cut one tiny part out did the people stay in the theatre. Well, a lot of people stayed, but about half left, usually. I’ve been very lucky on every film – except Dune – that what you see is the director’s cut, because I have final cut. Except for censorship, I’ve never had to make any changes that I didn’t want to make.”

I’d like to finish by acknowledging Mr. Mel Brooks who, as producer, has brought us such genre delights as Frances (1982), The Doctor And The Devils (1985), The Fly (1986) and, of course, The Elephant Man (1980), which introduced unsuspecting mainstream audiences to the work of David Lynch, who Mel aptly described as “like Jimmy Stewart – from Mars.” And it’s with that thought in mind I’ll bid you a good night and look forward to your company next week when I have the opportunity to simultaneously raise both hackles and cackles with more dreadful dross from the drains of Los Angeles in another trouser-moistening fear-filled film review for…Horror News! Toodles!