After their plane crashes in Alaska, seven oil workers are led by a skilled huntsman to survival, but a pack of merciless wolves haunts their every step.

Stop me if you’ve seen this movie before, A plane full of stock characters (Big African American, Tough Hispanic, Bookworm, Wise guy, Know it all, etc..) crashes in some desolate area where the weather is awful & they have to band together to find a way to survive. You didn’t stop me & you know you’ve seen this movie before! Well, another one of these was released a few months ago & it’s called “The Grey”. The big difference here is that the seven survivors are workers on an oil rig and they crash somewhere in Alaska. Somewhere way deep in Alaska where there’s nothing for miles around except trees & snow. Lots and lots of snow….. 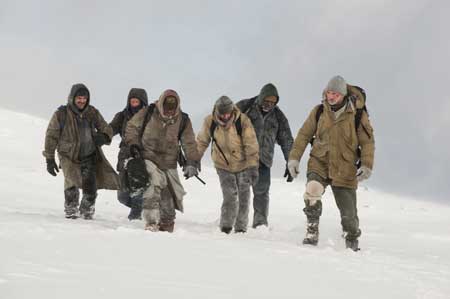 Liam Neeson plays John Ottway, whose job it is to kill wolves who attempt to make meals of the workers who aren’t paying attention to their immediate surroundings. He accomplishes this with a high powered sniper rifle & is a pretty good shot. But he isn’t the talkative type, like the others are. He keeps to himself and in the beginning of the movie he describes (In narration) the people who work on the rig as “Unfit for mankind”. He intones these heady words as he walks into (& out of) a bar where the others are drinking, gambling & fighting. He then mutters some words about a woman he “Thinks of every second of the day”, a woman he “Can’t get back” while we see him in bed with this woman as she lightly strokes his face. He goes around the back of the bar, gets on his knees & puts the barrel of his rifle into his mouth ready to pull the trigger when he hears some wolves howling in the distance. Why does he have a death wish? Why do we see him writing a letter (In flashback) to this woman? Why does he still have the letter in his pocket as he boards a plane with a motley crew of characters getting ready for some R & R? Why am I asking so many questions?

As “The Grey” continued I found myself asking a lot more questions. A whole lot more of them in fact but I’ll get to them in a second because I want to get the few things I liked about the movie out of the way first. All of the characters in the film come straight out of the “Guide to writing characters for a disaster movie” handbook but the actors in the role play them all pretty much to perfection. They all know their characters function in the script and go about their business handily. Neeson is suitably grim and foreboding as well, playing Ottway as a silent/deadly/understanding/ everyman who takes it upon himself to get the survivors to safety. 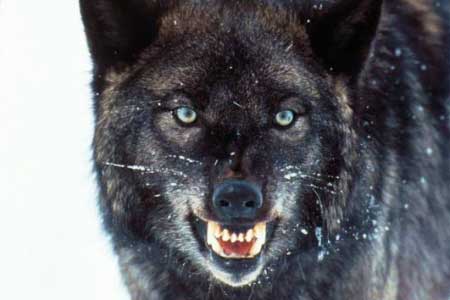 Once the plane crashes & the dead are sorted out from the living, the survivors stay close to the plane for a day before they realize that they are being watched by some very hungry wolves and since Ottway does happen to kill wolves for a living, it falls upon him to lead the seven survivors out of the frozen wilderness they find themselves in while trying to stay one step ahead of the wolf pack hunting them down one by one. That’s pretty much the whole story as we’re not given much background behind any of the characters save for Ottway and even then we don’t know too much about him either. But the crash scene is effective, the atmosphere is tense & the film is beautifully shot so all I need is for the script to kick into high gear.

But the script is where “The Grey” fails big time. Never mind the fact that all seven of the survivors should have frozen to death pretty much after the first half hour, the script continues to toss one impossibility after another at the audience hoping that the idea of some wolves scampering about will divert our attention from the fact that everything these guys do to protect themselves should kill them within minutes. To add insult to injury, Ottway (Who’s supposed to KNOW what he’s doing) continually leads these guys into danger. But in the movies no one can see their own breath in an airplane & not seem to notice that the plane has lost power (Except for in this one. For reasons I’m still trying to figure out). 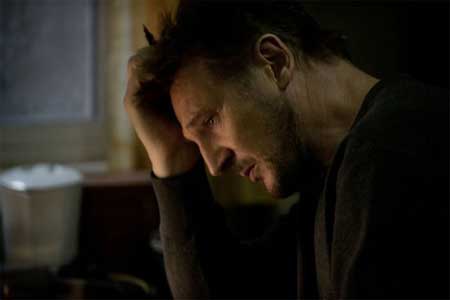 Where do I begin? Hmmm, lemme see here…how about the fact that all the survivors had to do was build some sort of blockade using the parts of the airplane to surround themselves and then build a fire within that blockade for warmth? How about the fact that as the survivors begin their trek towards the woods (Why? Because Ottway SAYS so) they are woefully under dressed for the extremely hostile weather they’re faced with. All of them have their faces exposed to sub zero temperatures in addition to high wind gusts yet nobodies nose/ears/eyes fall off after 30 minutes which would sure as hell happen to me if I was out there wearing a f*cking baseball cap (Yeah, one of them wears a cap throughout the film) on my head & nothing more.

How about the fact that as they get further into their trek they find themselves struggling to walk in snow 3 feet deep but when set upon by the wolves they not only manage to run pretty fast in snow they could barely walk in 5 seconds earlier but they actually manage to OUTRUN the wolves? Well, most of the time anyway. Every so often one of them has to die so we can get to Neeson as the last man standing (As if there was any doubt that would happen) at the end. Facing off against the Alpha male of the wolf pack in a one on one battle to the death no less? As a matter of fact, every idea that Neeson has ends up killing his companions off one at a time. And what’s the deal with jumping off a cliff on a rope fashioned from fabric that just seemed to appear out of nowhere? Who in their right mind would jump off a f*cking cliff on a rope made of shirts & safety belts? One of these clowns did…and survived! 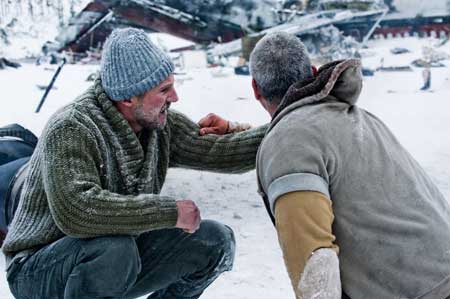 The film is full of silly, stupid plot contrivances like this that only exist to keep the movie moving because none of these guys would be alive after the first half hour. What makes it more upsetting to me is the fact that the film is fairly gripping & intense. I even jumped a couple of times at some of the wolf attack scenes which come suddenly & effectively although I wondered how these wolves managed to sneak up on them in broad daylight a couple of times. They were like f*cking ninjas the way they snuck up on them without a peep. I’m not a fan of wolves but I especially hate them when they’ve been trained in the ways of the ninja. Aren’t their sharp fangs enough of an advantage already? And don’t even get me started on the ending…(Stick with it through the end credits to annoy you even more).

If you haven’t figured it out by now, I didn’t like “The Grey” all too much. Good acting & cinematography only goes so far people. A stupid script just wastes the efforts of all involved. And that’s what we have here…a very stupid script. “The Grey” was released in January which (Along with February) is the acknowledged dumping ground for films that studios don’t have much faith in. But this one got some good notices & did brisk business at the box office, it did have a very effective promotional campaign behind it though. And as I said earlier, the few things it does well it does very well so I can’t begrudge it’s success. But I can give it a 1 1/2 out of five shroud rating for the effective acting & atmosphere. Everything else is straight out of “Only in the movies-ville” though and that to me is as unforgivable as those f*cking ninja wolves were.