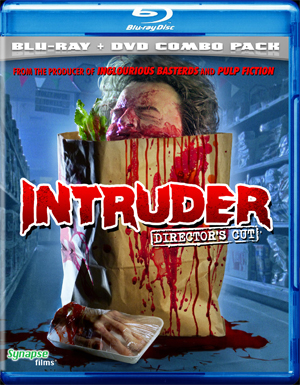 It’s 10 pm and the employees of Michigan’s Walnut Lake Supermarket are in for a really bad night. The place is shutting its doors for good, and the night crew has a long shift ahead of them… longer than they think! The lovely check-out girl has a deranged ex-boyfriend, the store’s phone lines are cut and the employees start dying in the most stomach-churning ways imaginable (courtesy of Academy Award®-winning KNB EFX Group). A deranged killer is on the loose in the grocery store! Can anyone stop this murderous intruder?

Synapse Films is proud to present Scott Spiegel’s INTRUDER, the “holy grail” of extreme gore cinema, in an all-new 2K high-definition transfer of the original uncut, uncensored version. Sam Raimi (director of THE EVIL DEAD and SPIDER-MAN trilogies) and Renée Estevez (TV’s THE WEST WING) star in this blood-drenched cult film classic that critics call “a gorgeous low-budget shocker that has long been one of the best kept secrets of the genre scene” (Alan Simpson, Sex Gore Mutants). Be sure to look for Bruce Campbell (THE EVIL DEAD, TV’s BURN NOTICE) in a cameo role.

From Lawrence Bender, the producer of Quentin Tarantino’s PULP FICTION and RESERVOIR DOGS, and the classic FROM DUSK TILL DAWN!
Scott Spiegel’s INTRUDER presented uncut for the first time in beautiful high-definition in a DVD/Blu-ray combo! 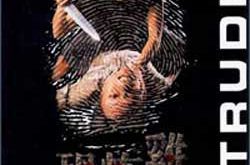