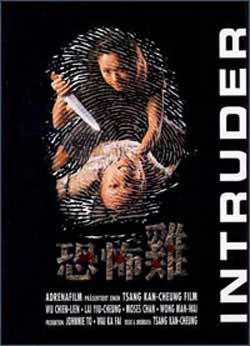 Yieh Siu Yan is a deranged women wanted by the authorities of Taiwan. She will steal the identity of a lonely young woman to get back to Hong Kong. After that, she successfully passes every custom point and decides to become a hooker to kidnap a lonely guy to complete his enigmatic evil plan. The victim is Chen Chi Min, a poor divorced taxi driver who has a lot of family problems and has been living alone for the past a few years. He also has one young daughter who is living at his mother’s house. During the following day, Chen will be immobilized and sequestered in his apartment, trying everything he can to evade and protect his mother and daughter from the evil Yieh Siu Yan. Every time someone will try to help Chen or discover the real identity of Yieh Siu Yan, she will do everything she can to get rid of the person, which also means, to kill in a gruesome way.

Hong Kong is a exciting, different, refreshing, eye opening, wonderful world when it comes to the movies they make there. Of course most people think exclusively of Kung – Fu movies and Bruce Lee, but hell, even if you are a know it all horror movie fan you probably don’t think about the Hong Kong film industry that much. But if you do think about it Jackie Chan, Jet Li, and John Woo are the second, third, and fourth things that come to mind and it was the movies of John Woo that pulled me into this world. His earlier films were epic but gritty odes to Sergio Leone and classic 70’s American action films and even if you are a well schooled gorehound Woos movies are shockingly violent! Just watch THE KILLER!

Look for the scene where Chow Yun Fats character rolls up on a badguy and blows his f*cking arm off with a hand cannon! Or where he pins a dude to a table through the shoulder with a butcher knife, or when the muzzle flash of the Killers gun bloodily blinds a girl! ( you might be wondering what any of this has to do with the INTRUDER, I will get to that soon) And it was the films of John Woo that got me to explore further into the realms of HK cinema. I started with the action flicks and I am lucky that San Antonio has a decent Asian video rental store and I rented a lot of movies from this place and I eventually found a few HK horror movies. I know that HK produced almost as many horror movies as they did action films but the only ones I ever rented were Dr. LAMB and RUN AND KILL.

Technically RUN AND KILL could be called a action film too but it is really downbeat and violent. And I know about the hopping vampires but I have yet to see any of the movies about them, Yes, downbeat and mean spirited. Alot of HK movies are like this and not just the horror movies and INTRUDER follows this tradition of being harsh and brutal. It’s from 1997 but looks like it could of come from the late 80’s. It’s about a girl named Yan who wants a ID card and will even kill to get it. She kills a prostitute and this first kill is a strangulation and as I was watching this murder scene I wondered that it must be hard to fake it and act that you are in a life and death struggle and the two ladies doing it in this scene are pretty convincing. So Yan steals this hookers identity and flees Taiwan to Hong Kong to find another victim to set up a identity for her wanted criminal husband to assume.

But the prostitute whose identity she stole has a husband and he is waiting for her to come home. She is able to slip by him but in what is probably the funniest scene in the whole movie, while this guy is waiting for his wife his friend tells him he shouldn’t worry so much so he gives his friend a backhanded fist and sends his friend flying halfway across the room and slams up against a wall! Who knew that anxiously awaiting for your prostitute wife to come home gives you superhuman strength!

INTRUDER is a category III film which, if you didn’t, know is pretty much equal to a hard R rating here in America but without the sex and nudity. So other then the guy getting knocked into the wall there is very little else humorous but actually the husband of the hooker is in some other scenes and he is pretty funny. But other than this guy INTRUDER keeps it dark and serious for the duration of the movie. INTRUDER is a hard movie to review. For one there is not really a likeable character that you can root for really. Yan seems to be the focal point character but she’s a killer and the guy she picks actually comes up to her and propositions her and acts like a jerk and I wanted to see him get killed in a sick and twisted manner.

He takes her home and lucky for Yan he lives in a secluded spot on the outskirts of town where she is able to kick his ass, subdue him and wrap him in duct tape. And then there is Yans husband. This guy is a real piece of work. Through Yan we learn that he killed some cops and is on the run but that police dogs ripped both his hands off! And when her husband finally does show up near the end you see that she wasn’t kidding. This guy is a real asshole and even more of a piece of human trash than Yan is and he’s got a hook for a hand. But on the other hand he just has a regular prosthetic hand. I would of liked to see the movie be more about him doing the killing and it would have been more fun if he had different attachments for his hands. Like a harpoon tip, or a meat cleaver or hunting knife.

Another thing about INTRUDER is while there are some hardcore brutal murders they are not explicitly bloody and gory. They do portray that it is not easy to kill someone just like it probably is in real life. This movie is dark and gritty and there is the killing of a dog and child endangerment and there is even some horrific limb chopping but it just wasn’t bloody enough for me and if they had scenes with the police or forensic investigators it could be a episode of Law And Order:SVU or CSI: Hong Kong.

By the end of the movie I started to feel a little sorry for the victim but earlier we learn that he has a daughter that he never takes care of and when his mother comes to check on him Yan kills her and wants to kill his daughter to get rid of all the witnesses! The daughter is a small child and she is the only one I did not want to see die horribly and while I did feel sorry for her dad at first I changed my mind when I realized what a deadbeat parent he was.

INTRUDER is a good movie, a above average suspense thriller that is violent enough and ugly enough to satisfy genre fans but unless you are a devout fan of Asian cinema and Hong Kong films in particular I can’t get behind it and tell you to run out and find a copy. Besides I don’t know if it is even easily available and why would you seek this one out when there are much more flashier, outlandish, and gory films lurking out there like MACHINE GIRL, TOKYO GORE POLICE, MEATBALL MACHINE, VAMPIRE GIRL VERSUS FRANKENSTEIN GIRL, and ROBOGEISHA.

Hell I still haven’t seen THE TOWN THAT DREADED SUNDOWN, LUNCHMEAT, or THE NIGHT BRINGS CHARLIE, have you? And what about the U.S. film called INTRUDER with Bruce Campbell? Have you seen that? So unless the Hong Kong INTRUDER falls into your lap you don’t have to lose sleep over the fact that you missed it.