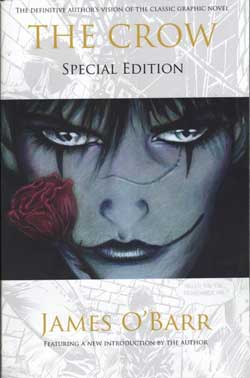 Many of us became familiar with “The Crow” thru the glory of Hollywood. That controversial Brandon Lee incident and that wonderful gothy movie. However, it was the early graphic novels of James O’Barr that captured the original essence of the Crow legacy introducing to us a rather haunted, tortured soul who was bent on vengeance for being wronged by the cruel world he and his girlfriend lived in. On one side of the coin we have Eric Draven and his girlfriend Shelly. 2 young people, lost in love and the wonders of a blooming relationship. They didn’t bother anyone, kept to themselves and happened to be in the wrong place at the wrong time.

When their car breaks down, a gang of street hoods assault them and leave them for dead. Eric is forced to watch in his paralyzed state due to a gunshot blow to the head as they rape and kill Shelly

This moment…this days of fate brought the cruelty of a local gang on them for no reason ending in murder, rape and more murder. It was an uncalled death, and an extreme moment of suffering for 2 who asked for nothing but compassion.

The Crow, is the figure of revenge….the image of retribution and the avenging ghost figure of Eric Draven. Thru the magic of a crow, he is reborn unto the earth with the sole power of being invincible at least to mortal objects. Bullets bounce off, skin re heals, stabs do nothing. His return is to invoke retribution for the fateful night that the gang members decided to indulge without cause.

The gang members who are introduced include such names as T-bird, Fun boy, Top Dollar, Tin-Tin, and Tom-tom. Each is subjected to torture, pain, murder or all of the above as Eric reminds them of what they did.

In this collective graphic novel, we get flashes of what happened told thru various, segmented stories. Each is illustrated in black and white projecting a harrowing curse over the town of Detroit. Namely the Crow who pays a visit to each thug and executes them appropriately. If you remember the film,. alot that of what is in here will be reflective of the movie itself. A few details have changed, but the core story is still in place. As a narrative, This release jumps from style to style that also segue with a variety of urban tales. A vengeance streak has been unleashed upon Detroit, and with it “Crow” has become the anti hero protector if even for a moment.

The graphic nature and cold ink presentation helps to paint an even more brooding version of the Crow legend. James O’Barr has set a milestone with these releases which are celebrated in this collective.

The TPB for review features some extra art, stories and inclusions that will be a bonus to any fan of the franchise.

Fans of comics, “The Crow” and great reads will delight in this full packed release. If you haven’t spent any time with James O’Barran this style of writing, this of course would be the place to start.