Top 10 Horror Movies that got me thru Highschool

In a sentence that I feel will hit hard at home with a bunch of horror fans, I wasn’t a wildly popular young man as my high school career began. Through time and fiercely sticking to being the man that I am, I won over a great deal of folks, but it was certainly a war of attrition, one that took people I liked, lusted for and loved away from my life throughout the years.

Looking back, I wouldn’t change a thing. People come and go, and such is the way of things whether one molds himself to life du jour or stays the arduous course to the bitter end. I did the latter, and in both interpretations of Frost’s “and that has made all the difference,” I find myself in full agreement. Regret creeps in on occasion, and other times have me elated that I became the absolute f*ckin’ champ I’ve become. Ultimately, it’s all a matter of following what you think is right, no matter what the outside odds dictate.

And among those things that felt so right, despite turning so many others away, were the films that kept me going. There were the sappy love stories that had me thinking “ooooh, that could be me if I just bought her flowers or learned how to kick ass on a guitar or something.” And there were the movies that were just so damned big that knowing of them, seeing them helped a slightly awkward guy to connect.

But then, there are the gems. When Friday night came along, and I didn’t have a date at 16, I had certain movies that kept me company. The jury’s still out on whether or not they kept me sane, but they did keep me happy enough to not give the good college try to slitting my wrists or drinking myself dead (hmmmm…yeah, pretty much “not sane,” I suppose) throughout those tumultuous years. This list is all about those gems, and how they not only saved me then, but gave me another little interesting facet to my personality as my particular vintage aged. So, without any further ado…

10) My Best Friend is a Vampire
This is the first one, as it’s not completely a horror flick, but the vampiric elements do allow it to be included as collateral horror damage. It’s essentially your run-of-the-mill teen comedy about a kid who turns into a vampire…basically, think Jim Carrey’s Once Bitten, but cooler, more authentic to a degree, and a Hell of a lot more fun.

9) The Crow
In going back to see this movie again in the recent past, I’ve discovered that it kinda sucked. In fact, it’s almost intolerably bad, minus the incredible mood Alex Proyas was able to achieve over the entirety of the project. Unfortunately, everything’s contrived and cheesy, to a large degree, and I felt a little embarrassed watching it in my late 20s.

That said, I saw this movie every damned day, 4 times a day at the local theater over the summer between 8th & 9th grades, and my alienated mind immediately identified with the music, the grungy feeling, and the belief that love truly does know no boundaries. Brandon Lee as Eric Draven, a single-minded tool of absolute vengeance, was catharsis for me, a guy who could right the horrible wrongs in his life that I simply couldn’t tackle in my own. Shit then, but the perfect mix of everything in the coolest of cool worlds, circa 1994. 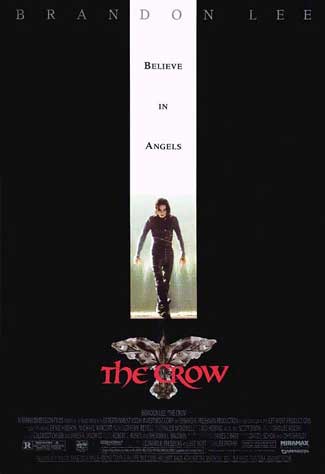 8) Stephen King’s The Stand
Same year, we had the epic Stephen King miniseries for arguably his best novel, The Stand. I was sucked into it from the first episode, loved the clearly-cut Good vs. Evil battle, and was thrilled and shocked by every twist along the way. I’d never read the book at that point, so all of this masterful storytelling being presented to me in this form had my jaw dropped, and was a major step forward in meeting people, friends who became my best, as we talked about the previous night’s episode in school. Plus, that scene in the tunnel still makes my skin crawl. 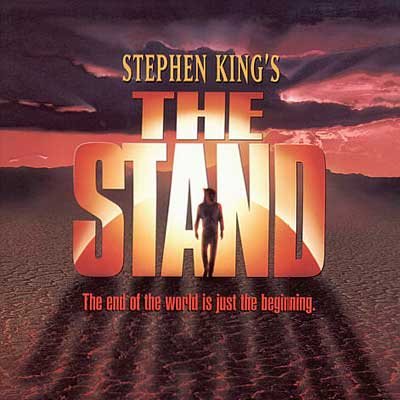 7) The Phantasm Series
All of these wonderful Don Coscarelli flicks have to be included at once (as will another franchise to be named later) because of how tightly the story followed and maintained its continuity. Sure, by Phantasm: OblIVion the story was getting a bit far-fetched, but the that tremendous story arc, the tangibility of seeing the Tall Man’s path of destruction and the sheer loneliness left in his wake was mesmerizing as a teenager and was the real first series that made me want to write for film myself. 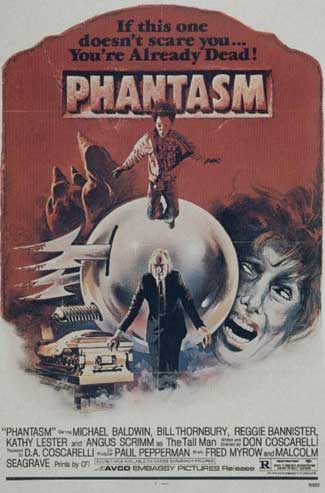 6) In the Mouth of Madness
The first time I saw this was in the theaters, and I had the flu. I stuck through it, but it was probably the most painful experience I’d ever had at the movies. I saw the movie later on VHS, feeling quite healthy, and was absolutely floored. It’s one VHS which was absolutely worn out, and had all sorts of manic creativity in it, and is still the best feature-length film that Carpenter’s done in ages. A regular recommendation from me, I spent many a boring, girlfriend-free weekend popping this one in and patching a hardcore horror fix. 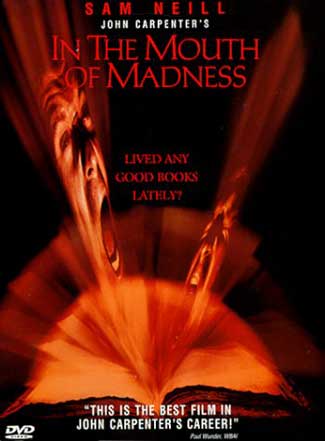 5) The Willies
A definite sleeper amongst this bunch, it was a Creepshow for teens, and it hit all the right buttons with me. With a pre-Salute Your Shorts Donkey Lips being a sick f*ck in it and all sorts of urban legends made visual, it was another thing that I wanted to show everyone who was in the mood for a quality, fun horror flick, and it was the beginning of winning people over with horror flicks, which was something I’d never expected in those days. 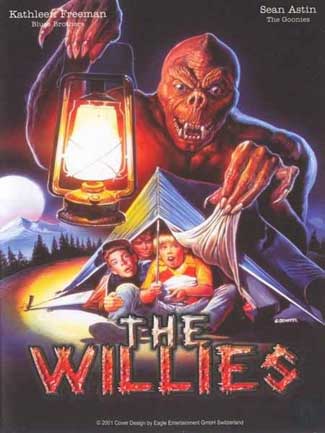 4) Warlock: The Armageddon
Again, another movie that pretty much sucks now, but the cinematography in that movie caught me from scene one, and the epic nature of the obviously low-budget flick really drew me in and had me hooked. It helped that Cinemax played it all the time, but when that eventually stopped, I was on a VHS copy of it like herpes on a d*ck in Rio. Julian Sands is always awesome, and the rest of the cast was definitely adequate…and Hell, even though the CGI attempted was absolutely God-awful, it was still a joy to watch. I almost consider the flick to be filmic comfort food…very disgusting comfort food. 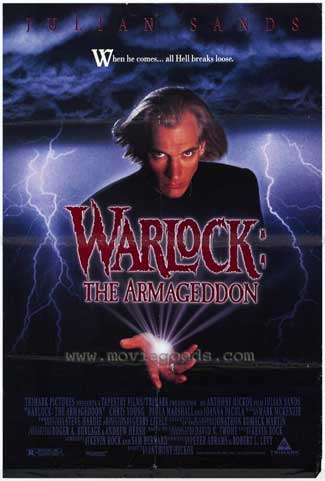 3) Dead Alive
“I kick ass for the Lord!” Yes, yes he did, and that beautifully sick-ass Peter Jackson flick was a constant staple in my regular rotation. It was the movie that turned me into a true teenage gorehound, and had everything a creep could want in a horror flick: laughs, blood, guts, exploding faces, babies on animal steroids, and a pudding scene that actually made me puke the first time I saw it, in 1993. Basically, it was like going from Dr. Giggles to Dead Alive, and no one’s ready for a transition like that. Great, fun flick that made me joyous to no end, even when life often didn’t. 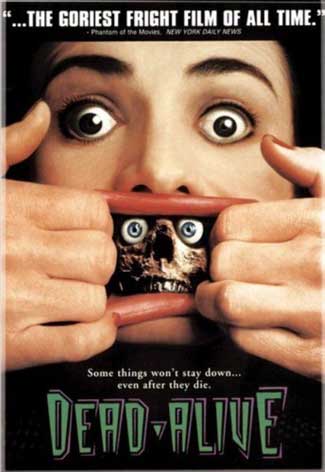 2) The Subspecies Series
This is another series that maintained a very tight continuity, and featured an amazing antagonist in Radu, played by Anders Hove, who was a celebrity to me that reached Brad Pitt or George Clooney heights in my mind. The special effects weren’t jaw-dropping, but always creative, and the Romanian backdrop used for the entire series was as much a draw as anything else. In liking vampire movies, I was already lined up well for these movies, but with this rather clever mix of both the Nosferatu and Dracula strains of the vampire myth, I found a goldmine of horror that could be as close to “mine, all mine” as anything out there, and finding people who shared my passion for those flicks did a lot in helping me pick the people who would become those I love and trust the most in this world. That’s a big deal in the teens, as I’m sure you remember. 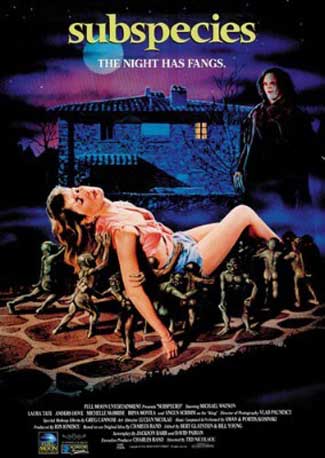 1) Dawn of the Dead
Could it have been anything else? Stephen King’s IT and the Nightmare on Elm Street series were also strong candidates in this list overall, but when it comes down to it, there was no other movie I owned more, watched more, in more different cuts and varieties than Dawn of the Dead. Watching this movie really made me grow up as a horror fan, and did the best thing that these movies could have done; it made me stop caring about what the world thought. 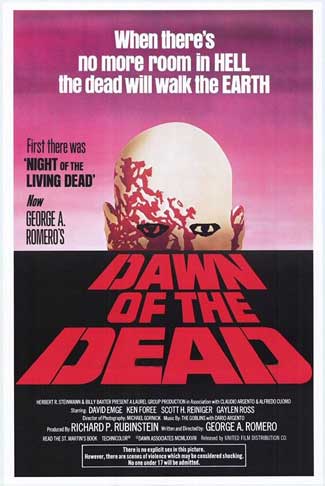 Before Dawn of the Dead, I was bashful about my horror fandom. It was a dirty secret of sorts, something I held back because I wanted popularity and girlfriends and all of the things that high schoolers so often want. But Dawn of the Dead was so good, so powerful and poignant that I no longer cared what people thought of me. Don’t want to be my friend because I love gory, creepy, f*cked-up horror flicks? There’s a path right over there where you can freely f*ck yourself; wearing Romero’s 1978 classic as a shield, I was finally comfortable with being the horror fan that I’d always felt I had to hide. Without it, I’d probably still be hiding this love of mine, and that would be a truly sad thing. With it, I became a man in ways that football, hangin’ with the bros and going to ska shows just weren’t going to provide me. And so I see Dawn of the Dead as something that was truly helpful to my life.

I know I’m not the only one, either.

Top 10 Horror Movies that got me thru Highschool

Tags Dawn of the Dead Dead Alive horror movies In the Mouth of Madness My Best Friend is a Vampire Subspecies The Crow THE STAND The Willies Warlock: The Armageddon