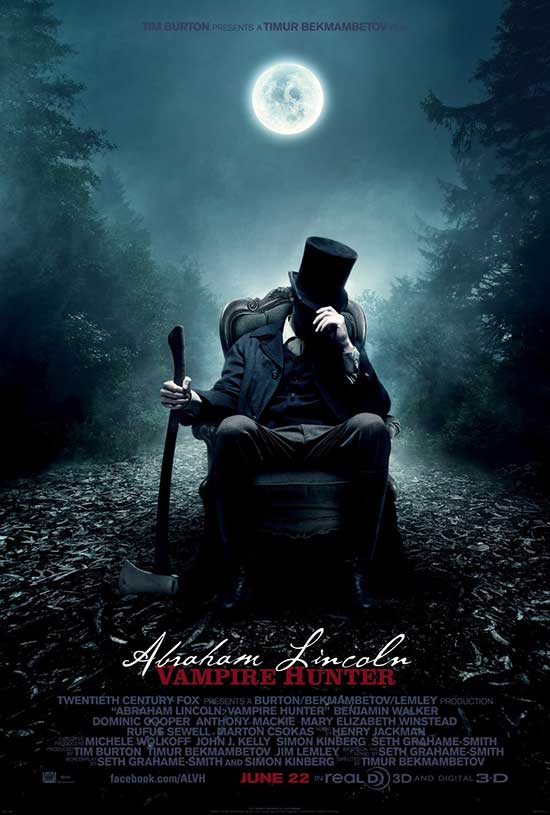 Now this was a movie The Black Saint was anxious to see! Based on the Seth Grahame-Smith novel of the same name (He also wrote the screenplay), “Abraham Lincoln: Vampire Hunter” (ALVH for the rest of this review) tells the story of how young Mr. Lincoln discovers that vampires not only exist but are also responsible for the death of his mother and how he devoted the rest of his life to not only abolishing slavery but abolishing those evil vamps as well. All of this AND becoming the 16th president of the United States also! Talk about multitasking…. 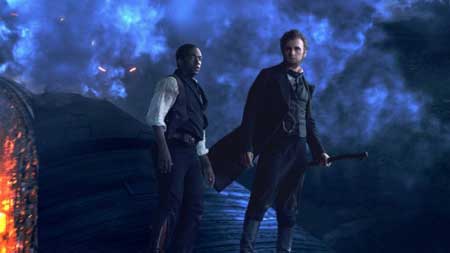 Firstly I have to say that if you’re gonna enjoy this movie at all you have to leave all of your pretensions at the concession stand. If you’re a American history buff and you’re thinking about watching this movie you’re going to go berserk, I guarantee it. But really people…what did you expect with a title like “ALVH” huh? Historical accuracy? Nope, what this movie is all about is honest Abe kicking ass in all manner of escalating action set pieces culminating in an epic battle on a moving train. If nothing else the film succeeded in keeping me awake as it rarely lags. 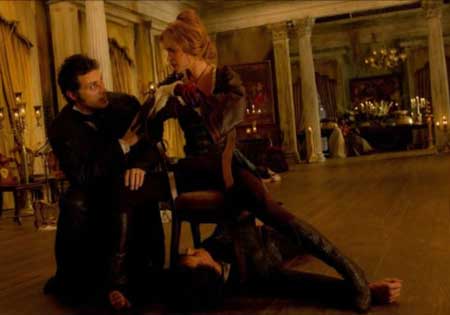 Director Timur Bekmambetov (“Night/Day Watch”, “Wanted”) is something of a genius with visual effects. All of his films have an electricity about them, a visual alacrity that demands the attention of the audience. His films move differently than other similarly themed films and they are always exciting to watch. Sadly, the stories that have come attached to his films haven’t always been worthy of all of the work he put into making them look so freaking good and “ALVH” is no exception to this because while the movie certainly looks great, I had a hell of a time even trying to figure out what was going on a lot of the time. 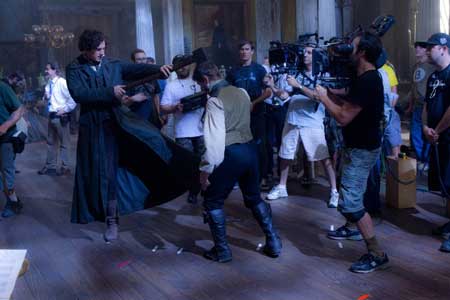 Y’see, Abe’s mom was killed by a vampire when he was but a boy according to this movie. She was bitten by a creature named Jack Barts (Martin Csokas) and the bite resulted in her contracting some horrible disease that killed her. Of course all this did was create the need for Abe to avenge her death but when he finally gets the chance to do Barts in he finds out that Barts is indeed a vampire & is way too much for him to handle. Abe just manages to escape thanks to the help of a man named Henry Sturgess (Domonic Cooper). Henry has been hunting vampires for quite awhile now and sees the makings of a vampire hunter in Abe so he takes him under his wing and trains him in the art of slaying bloodsuckers in what I thought was a pretty funny montage myself (Abe can REALLY chop down a tree when he wants to). 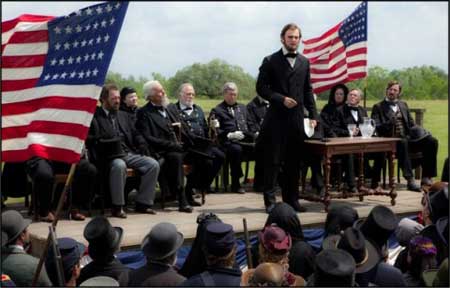 Part of the problem I have with the movie is the sudden shift from Abe’s vampire hunting to his career in politics. While I suppose you can’t make a movie about Mr. Lincoln without some talk of what he’s famous for it seemed like it was forced into this film, as if it was an afterthought and stuck into the narrative just because. In any case, his success as a politician gets noticed by vampire king Adam (Rufus Sewell) and this isn’t good for Abe because part of his agenda is the abolition of slavery and the vampires look at slaves as a steady supply of food that they are in complete control of. losing the slaves would mean they would have to hunt and expose themselves to the world. Adam really doesn’t like that idea too much…

Along the way we meet Mary Todd (Mary Elizabeth Winstead) who marries Lincoln and eventually becomes aware of his side gig as well. Oddly enough she just joins right in without many questions as to what the hell is going on. And we see Abe getting jiggy on all sorts of vampires in all kinds of ways. He eventually catches up to Barts and there is an epic (If extremely ridiculous) battle between the two of them that takes place in the middle of a horse stampede. Believe me, you haven’t lived until you’ve seen a vampire throw a entire horse at someone else! The problem with this scene is that, besides it’s inherent ridiculousness, it’s hard to see since the horses are kicking up so much dust as they’re stampeding along. Another issue I had with this (& other) scenes is the reliance on CGI. Bekmambetov is an amazing action director and he knows how to make a sequence move but his use of CGI here is almost funny. I know we all know that any action/horror/sci-fi film released nowadays is going to use CGI in it to some extent but a lot of “ALVH” looked like a cartoon to me. There is just way too much CGI here for my taste and I became a bit disgruntled as the quality of the CGI seemed to get worse the bigger the scene was. The vampire makeups also left something to be desired in my opinion. They look normal until they attack & then CGI comes in and makes them look like some rejects from “The Walking Dead”, I like my vampires to look like vampires not zombies. And what’s the deal with them being out in the sunlight without any damage coming to them? Maybe it was explained but I sure didn’t see/hear any mention of why the sun didn’t create an issue for the bloodsuckers. 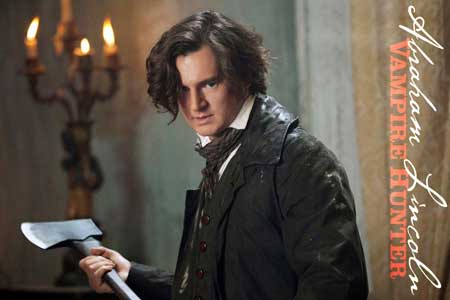 All of the actors perform admirably in their roles. Benjamin Walker is a pretty efficient Lincoln and he reminded me of a young Liam Neeson in some scenes. Dominic Cooper and Mary Elizabeth Winstead essay their roles well although I think the role of Mary Todd was there to utter just one (Hilarious) line. Rufus Sewell is great but I think he’s become a bit typecast in the “Nefarious Villain” role now, he needs to find a couple of “Good Guy” parts if you ask me although he does have that villainous air about him. I thought Jack Barts was a far more interesting villain and Csokas did a wonderful job in making him enjoy his villainy so much. It would have been a better movie if his role was switched with Sewell’s role I think. 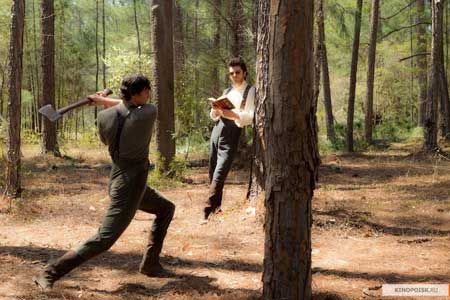 The movie seemed hastily edited though with scenes just stuck together with little rhyme or reason. The storyline seems rushed to me just a tad, as if they couldn’t wait to get to the bloodshed so a lot of the characterization is left to wither on the vine but I suppose that might be because the producers felt that everybody knows who Abraham lincoln is and don’t want to see his life story. I haven’t read the book but I understand that the movie deviates wildly from it so that might be an explanation for the overall choppiness of the script/editing. But the movie looks great and like I said earlier Bekmambetov really knows how to make an action movie. He just ladles the action on like gravy on mashed potatoes and it all works very well in that aspect.

The title sounds like a joke but it is taken all quite seriously so when something funny happens I wasn’t sure if I was supposed to be laughing. But it’s presented as an action/horror movie, not a comedy so make of it what you will. I really liked some aspects of “ALVH” but the overall silliness of it’s premise and the over abundance of CGI in the film detracted a lot of the fun from it for me as well. They aren’t cheap with the violence here though, the blood DOES flow (Remember, the film is rated “R”). This is NOT intended to be a history lesson so if you’re bringing a kid keep that in mind. Then again if you’re expecting a history lesson from a movie called “Abraham Lincoln: Vampire Hunter” you might have a problem… 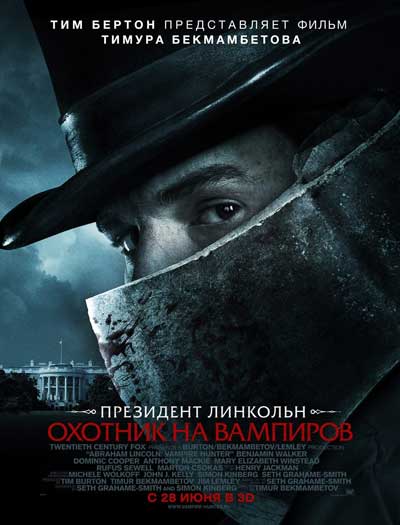 The “Surprise” ending really wasn’t much of a surprise to me and it was telegraphed early on in the film but it might catch a few of you off guard. Overall “ALVH” rates 2 1/2 shrouds out of 5 for me, it is entertaining and filled action packed for sure but some of the action is just ridiculous to watch and cartoony looking to boot. But I did have fun watching it and it’s worth a view if you have the time and interest. Just keep your expectations relatively low and you’ll enjoy yourselves!