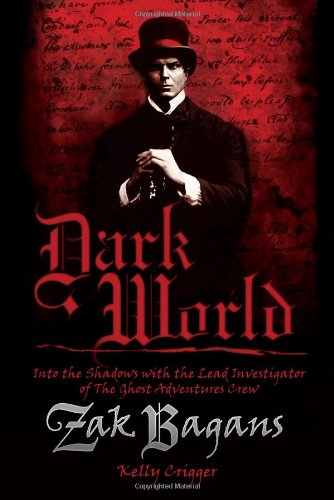 Dark World: Into the Shadows with the Lead Investigator of The Ghost Adventures Crew

By now if you haven’t seen a half dozen or more of the “Ghost Adventures” episodes, it’s quite possible you’ve been living under a rock or haven’t paid your cable bill for the last few years. This unique exploration of all things paranormal conducted by a dedicated team of 3 is a pretty constant factor when it comes to the “Travel Channel”. Though what keeps it coming back for more and kept interesting is not only an intelligent team of researchers but a front man who you might expect driving a hardcore industrial act rather than a historal driven TV show. His name is Zak Bagans and his passion far exceeds the responsibility of hosting a weekly (or was it daily? I forget) TV show on ghost hunting.

As many who have experienced the show will attest, it’s not your usual brand of shoot and talk presentations. Zak  often taunts, instigates and challenges the ghosts almost on constant basis. But where did this newcomer get his chops? Was he just a clever kid with some editing abilities and great sale presentation? Was he TV’s version of Chris Angel for ghost hunting? Did the network decide they needed a marketed personality to help drive ratings? Ok, these are a few of the assumptions that may have crossed your mind. The good news for curiosity seekers is that Zak has authored a book. In fact, not only is it a book on ghost hunting but in fact the origins of Zak himself. He’s Tv’s gothic surperhero and he’s ready to kiss majpr ghost ass.

As we begin into his auto biography, Zac takes us down the memory road of when things were simple. We find that our black haired, tight T-shirt wearing front man was in fact a shy individual who had a hard time communicating and facing people. Early recounts include the times when he first was visited by a paranormal. This younger event sparked the fire, but it’s a later visit by a specter who looked him straight into the eyes that really ups the game. Life was not so glamorous in the early days. His life was a struggle trying to cope with the 9-5 and just getting by. Somewhat of a non-believer himself, we are told how his journey pulled him into the
place he is now. How he became a “sensitive” thru the course of his research and how things just tidal waved intothe present. No, this no story of a rock star with a dream, but rather a soul with a purpose.

College didn’t agree, jobs were depressing, and money was running out fast. Was Zac’s interest in extreme fighting and body building only a deterrent to his true calling? Was his induction into film school the seed that provided the editing skills needed to present his first demo documentary? All this and more is presented from his own point of view.

Zak reveals the times and events that weren’t documented on TV. He tells of how he deals with the spirits and what kinds of things to look out for. He explains how the art of the industry is perceived and what he has done to help fuel a greater understanding of the medium against the walls of skepticism.

Orb’s? sure we’ve heard of them, but as viewers what is to say that they aren’t just dust particles in the camera lens? Zak breaks down these assumptions into proven data and how it debunks the notions and perceptions. Using high tech tools, he talks of how his team strives to show the viewers why a circumstance is a true paranormal instance and what data supports it.

We are taken thru different events that were documented on the show and how he deals with locals, getting insider info and the sensitivity of those who have spent years within the institutions. The question of types of disembodied spirits, quantum physics and how it all seems to come together is answered thru the insight of one who has seen it all.

We learn of why his emotional height is often unbalanced within the presence of electric magnetic energy and even an instance of momentary time travel. A believer or not, the experience relived thru this book is quite compelling and might fuel your own self evaluation of life and meaning.

In all, this book is that missing piece that fills in the blanks on not only Zak’s background but how a TV show is born and taken from concept into reality. Ghost hunters, fans of horror tv and fans of the individuals themselves will relish in this honest overview of origin, taking action and the realization of one’s dreams. Author Zak Bagans and co-author Kelly Crigger present a comprehensive journey of one persons look back on how things evolved into the show we experience today. Well written, a touch of humor and lots of supernatural insight….Dark World is a Zak’s work of passion.