Now that the much anticipated Season 2 of The Walking Dead has begun, in the coming weeks I’ll continue to be bringing you a special look at our beloved cast of characters. This week we’ll look at Daryl and Merle Dixon. 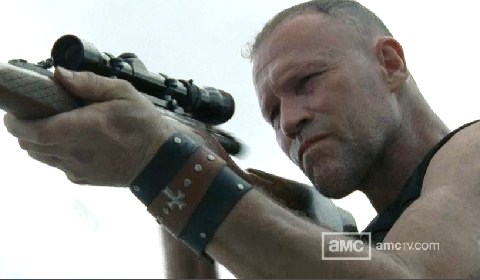 Daryl and Merle Dixon are characters solely created for the television series. They do not appear in the comics, although Robert Kirkman has teased that he would like to introduce either one or both of the brothers in later issues of the comics. Merle is played by renown character actor, Michael Rooker. Daryl is played by Norman Reedus, of Boondock Saints fame.

Merle Dixon is a survivor that is encountered in the second episode of the series. He is on the roof of the department store keeping watch on the streets below. He is extremely hostile, racist, loud and abrasive. He gets into a fight with T-dog and still sees the world in black and white terms, reflecting on racism and sexism. His obnoxious world view threatens the groups very chance of survival. Once Rick joins up with the group of survivors, it is up to him to put him in his place. Rick holds steady in his power and convictions and he handcuffs Merle to a pipe on the roof so he won’t pose as a threat to the others anymore. He’s left up there throughout the entire episode. Eventually the survivors have to make an escape from the department store, while getting the key to unlock Merle, T-dog drops it down a drain. Merle gets reluctantly left behind and in a last ditch effort T-dog tries to blockade the door to the roof with chains and a padlock. When word spreads back at the camp, the rest of the group doesn’t even miss him, except for his brother Daryl. Rick decides to go back for him. Once Rick, Glenn, Daryl and T-dog arrive back in Atlanta, Merle is nowhere to be found. He did leave something behind though, his hand.

Daryl remains with the survivors. He’s not as tough as Merle but is just as violent, has a quick temper, and will quickly resort to violence in a threatening situation. He is much more level headed and rational than his brother though. He is also a survivalist, and an expert marksmen hunter, acquiring a deadly accuracy with his crossbow. As season 2 is heating up Daryl is being uncovered as the rebellious red-neck with the heart of gold. Now that Merle is out of the picture he is starting to find his own footing. In a recent episode Daryl has started to hallucinate the images of his brother egging him on. They seem to share the same hardcore beliefs but Daryl is trying to do more good things, like extensively helping to look for Sophia, and helping other survivors out in tough situations. He has also confided his experience of being lost in the woods when he was a child to Andrea. He is starting to open up. There may be a risk in the future though if he continues to hallucinate Merle. Even though he was motivated to make it through his situation, Merle also started to try to make Daryl turn against the other survivors.

The Dixon’s: The brothers have a tumultuous relationship with each other. So far it has been discovered that when Daryl was a child he got lost in the woods for a week or so. Merle was always in and out of juvie, and their father wasn’t really around so Daryl took care of himself. Despite this, it is thought that they do share the same hardcore beliefs.

Carol: Carol and Daryl have some things in common. They both lost someone, this being the loss of Merle and the loss of Sophia, and they have both recieved some form of abuse. There are some hints that the two may get together? In the comics Carol eventually ends up with a character named Tyrese, it has been hinted that Daryl may be filling those shoes?

Rick: At first Daryl and Rick had a rocky relationship, after all Merle was left behind when the survivors escaped Atlanta. As the second season has been wearing on, they have a mutual understanding of each other. Merle and Rick probably won’t get along, and may never if they encounter each other again. Rick represents an authority figure. Merle does not get along with authority and that is pretty clear.

Daryl’s relationships with the remaining survivors vary. He is taking on a more leadership role and with that he has been able to connect with certain other survivors. He tells Andrea about getting lost when he was a child. He protects T-dog when a horde appears on the highway and T-dog gets hurt. He has also been the only survivor to diligently look for Sophia. Although quick to violence, like we have seen in the past when the group gets involved with a gang in Atlanta, he can say and do profound things.

Merle on the other hand, doesn’t seem to get along with anyone except for his brother. What is going to happen if and when they eventually encounter him again? Even if he appears again as only an hallucination to Daryl, will he be able to push him over the edge?

Have I forgotten to mention anything else about Daryl or Merle? Who is your favorite character in the series or comic? Please sound off in the comments section and look out in the coming weeks for the next Character Profile: The Walking Dead: Carol. Revisit the first season on DVD and Blu-ray and continue to read The Walking Dead comics. You’ll be glad that you did. Don’t forget to tune into AMC at 9 pm every Sunday for a new episode! This season promises to deliver twists and change our characters.