Film Review: Beneath The Planet Of The Apes (1970)

“Astronaut Brent is sent to rescue Taylor but crash-lands on the Planet of the Apes, just like Taylor did in the original film. Taylor has disappeared into the forbidden zone so Brent and Nova try to follow and find him. He discovers a cult of humans that fear the apes’ latest military movements and finds himself in the middle. Tension mounts to a climactic battle between ape and man deep in the bowels of the planet.” (courtesy IMDB)

Hollywood producer Arthur P. Jacobs, the man behind the whole Planet Of The Apes (1968) franchise, had purchased the rights to Pierre Boulle‘s novel Monkey Planet back in 1965, mainly because he wanted to remake King Kong (1933) but couldn’t obtain the rights to that particular property. 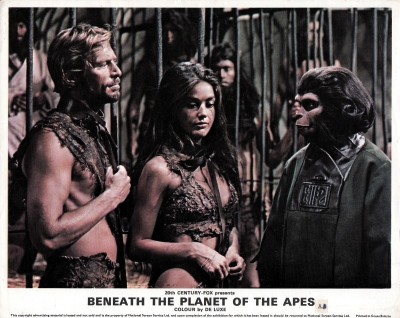 I was lucky enough to make Arthur’s acquaintance while on the set of his version of Tom Sawyer (1973): “I spent about three-and-a-half years of everyone refusing to make the movie,” he told me. “First, I had sketches made, and went through six sets of artists to get the concept, but none of them were right. Finally, I hit on a seventh one and said ‘That’s how it should look!’ Then I showed the sketches to the studios, and they said ‘No way.’ Then I got Rod Serling to do the screenplay, and went to everybody again – absolute turndown. I went to Rank in England and Samuel Bronston in Spain. Everyone said no. So then I figured, maybe if I got an actor involved, and went to Charlton Heston who, in one hour, said yes. Then Heston suggested Franklin Schaffner as director, and he also said yes. Now I have Heston, Schaffner and a screenplay and all the sketches. I go right back to everybody and they throw me out again!”

“I finally convinced Richard Zanuck to let me make a test, and I got Heston and Edward G. Robinson, with Schaffner directing it. I showed it to Zanuck who really got excited about it. The test consisted of a conversation between Heston and Robinson as Doctor Zaius in ape makeup. Everyone thought that no-one would believe an ape talking to a man. We packed the screening room with everyone we could get hold of, and Zanuck said, ‘If they start laughing, forget it.’ Nobody laughed, they sat there tense, and he said make the picture.” If you ask me, no-one would dare laugh in the presence of Mr. Zanuck, but I digress. 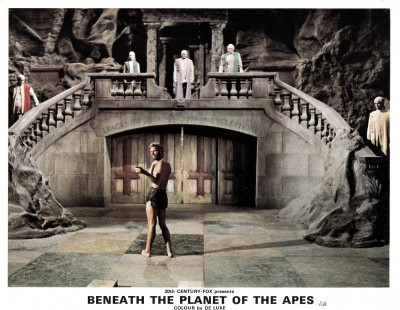 The second film contains the same implausibilities as the first. Beneath The Planet Of The Apes (1970), directed this time by Ted Post and written by Paul Dehn and Mort Abrahams, another astronaut by the name of Brent (James Franciscus), a friend of the first one, travels through the same time warp in his spaceship, ends up in roughly the same year, crash-lands in the same area of the world, encounters Nova (Linda Harrison) just as Chuck did, and then becomes involved with the same friendly ape, Zira (Kim Hunter). Like his predecessor, he doesn’t realise he’s on Earth for some time until he discovers some underground ruins which he recognises as parts of New York. 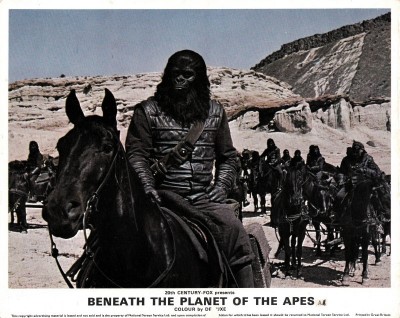 Many of the cast reprise their roles, with the exception of Roddy McDowall, who had other commitments appearing in many television shows including The Legend Of Robin Hood, Journey To The Unknown, It Takes A Thief, Night Gallery, The Name Of The Game and Medical Centre. 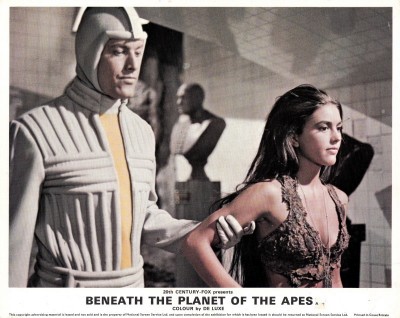 Anyway, Brent and the girl are captured by a race of intelligent telepathic mutants who live among the ruins – actually redressed sets from the musical Hello Dolly! (1969) – and who are survivors of an atomic attack on New York that took place two thousand years in the past. They now worship an object in their subterranean church which turns out to be a Doomsday Bomb, and chant things like “Glory be to the Bomb and the Holy Fall-Out. As it was in the beginning and always shall be” and singing “All things bright and beautiful, the Lord Bomb made us all.”

The film ends in a violent battle between the apes, humans and mutants, with Chuck making a brief appearance just in time to see his friends die, get shot himself and finally fall on the button that detonates the Bomb that destroys the world. 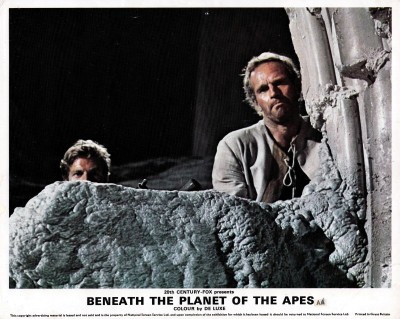 Beneath The Planet Of The Apes retains some of the tone of the original, and perhaps that’s its downfall, but the big mistake was replacing Chuck with a clone, however charming. To the shock of 20th Century Fox the sequel made as much money as the original, around US$15,000,000. This resulted in the scriptwriter Paul Dehn receiving a telegram in London from Arthur Jacobs which stated simply, “Apes exist. Sequel required.” Having blown up the whole world, this put him in something of a quandary, but came up with an ingenious solution. 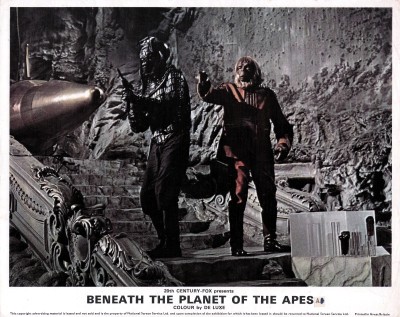 But that’s another story for another time. And on that mysteriously leading statement I’ll thank Cinefantastique magazine volume two issue #2 for assisting my research this week, and look forward to your company next week when I have the opportunity to simultaneously raise both hackles and cackles with more dreadful dross from the drains of Los Angeles in another trouser-moistening fear-filled film review for…Horror News! Toodles!