Even if you picked up the stand alone Blu-ray releases earlier this year, you’re going to want this box set as well.
I’m liking the looks of this – no doubt about it. 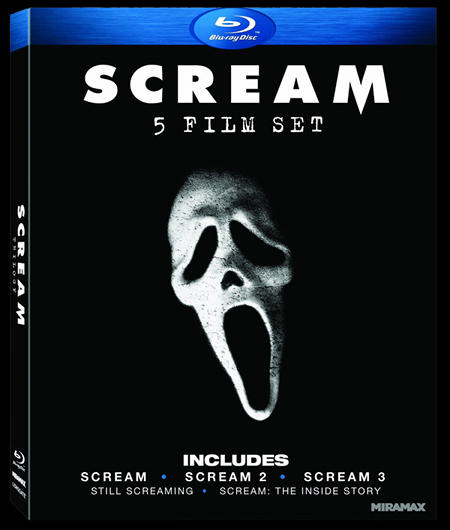 Check out what all this box set is going to throw at you:

Scream
After a series of mysterious deaths befalls their small town, an offbeat group of friends led by Sydney Prescott (Campbell) become the target of a masked killer in this smash-hit “clever thriller” (The Washington Post) that launched the Scream franchise and breathed new life into the horror genre. The Blu-ray Disc features audio commentary, a production featurette, behind the scenes footage, a Q&A with cast and crew plus the theatrical trailer.

Scream 2
Away at college, Sidney Prescott (Campbell) thought she’d finally put the shocking murders that shattered her life behind her… until a copycat killer begins acting out a real-life sequel. Now as history repeats itself, ambitious reporter Gale Weathers (Cox), deputy Dewey (Arquette) and other Scream survivors find themselves trapped in a terrifyingly clever plotline where no one is safe – or beyond suspicion – in this “delicious, diabolical and fun” (Rolling Stone) sequel. The Blu-ray Disc features include audio commentary, deleted scenes with optional audio commentary, outtakes, a featurette and the theatrical trailer.

Scream 3
While Sidney Prescott (Campbell) lives in safely guarded seclusion, bodies begin dropping around the Hollywood set of Stab 3, the latest movie based on the gruesome Woodsboro killings. The escalating terror finally brings Sidney out of hiding, drawing her and the other survivors once again into an insidious game of horror movie mayhem that’s a “suspenseful, clever and very entertaining” (NBC-TV) installment in the wildly popular Scream franchise. The Blu-ray Disc features include audio commentary, deleted scenes and an alternate ending, outtakes, behind the scenes footage and the theatrical trailer.
Also included are two documentaries: SCREAM: The Inside Story which I have seen and loved and STILL SCREAMING which I haven’t seen but can’t wait to check out.

Nice stuff all the way around.

Sept. 6th is when LIONSGATE will unleash the madness so circle the date and grab your wallet, it’s party time!