Book Review: The Order of the Blood – Authors Nicole Vlachos and Lane Morris 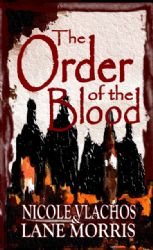 THE ORDER OF THE BLOOD

Synopsis:
Once, vampires of the Order of the Blood were revered and respected, but a change in political tides and waves of genocide forced them into hiding. Now, split into two factions with very different means to the end of regaining their freedoms, the brothers of the Order face a resurgence of public fear and hatred. A newly turned vampire – Ian, finds himself torn between sides. Interested only in saving his mortal love, Robin, from the bewitching spell of an older, much more powerful leader of an underground rebellion – Gideon, Ian must choose between protecting Robin or betraying those of his kind. Though Gideon claims to love her too, how far will he go to protect the fragile beginnings of his new world order? And with the membership of their brotherhood divided, who will be powerful enough to stop him?

Review:
There are alot of vampire/human romances out there. Too many really, even if you don’t count those Twilight books (which I don’t because those aren’t vampires – they sparkle and have venom and are too stupid not to realize they don’t have to go to high school over and over again – those aren’t vamps just really stupid supernatural something-or-others). Anyways. So another book about vampires and humans falling in love and struggling to be together isn’t going to be the first thing I’d pick up in a bookstore. Not even the second or third thing I picked up. And if I did decide to pick it up and read it, there would have to be something truly brilliant and amazing about it to make it feel like it was worth my while. Unfortunately for Order of the Blood, it doesn’t quite reach that standard, high as it might seem. But to be fair, there are some good elements in it that I found intriguing, and it has some strong writing, which I am always grateful for.

The basic premise seems to be human girl meets sexy vamp and falls in love, then sexy vamp falls in love back, but other sexy vamp falls in love as well, and poof you have human/sexy vamp love triangle and the whole “who will she end up with and will it be the guy I want her to end up with?” scenario. Nothing terribly new and exciting there. But the way the vampires of this book are introduced, with their super elite secret club operating on college campuses, their almost predominately male membership, and their political maneuverings and ultimate downfall, are unique. In fact those were the elements of the book that I was most interested in, as they were something I hadn’t necessarily seen before. There was mentions of a revolution against the vampires and an underground railroad and all kinds of fun new things. But these were really only mentions, in flash backs and conversations, and that was too brief a glimpse for me. I wanted more of that stuff and less of the love story, which made up probably two thirds of the story.Once the main human character started shacking up with the main vampire characters, the story dragged on and on and on. There wasn’t anymore action again until the last chapter (minus epilogue). It was, in a word, disappointing.

The main human character was also a disappointment. She started out all tough but wounded, with this great past as an activist and member of the underground railroad and vampire rights hero. And then she falls in with this sexy vamp and becomes a walking (sometimes), talking (ALOT….the whole middle of the book felt like nothing more than talking), lovesick (always) zombie. I expected more from someone that had been built up to be so strong. I expected fighting and I got….sleeping. It was a let down.

And the end was a bit of a letdown too. Once again all of these exciting elements were introduced – more vampires including a female one, more political intrigue, more dastardly double crossing and back stabbing – and it was over within a few paragraphs with the loose ends either tied up so quickly I almost missed it, or left floating around in the breeze as if they didn’t really matter. It felt almost like the writers got lost a little in their own story and just wanted it to end so they wouldn’t have to figure out where they went wrong.

If Order of the Blood focused more on the vampire politics, history, uprising, etc, and less on the love story/human vamp triangle nonsense, it would be alot better book. It would be something different and new and unique and not another of those supernatural romances that have inundated the media in recent years. As I said before, the writing was good and the non-romance elements were interesting. They were just lost amidst the the stuff that’s been seen a hundred times before.