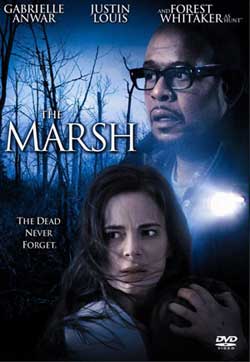 Plagued by disturbing visions, children’s author Claire Holloway (Gabrielle Anwar) obeys her doctor’s orders and takes a sabbatical, checking into the Rose Marsh Farmhouse. But instead of peace, she finds her worst nightmares come to life, forcing her to seek the help of a paranormal consultant (Forest Whitaker). Directed by Jordan Barker, this supernatural thriller also stars Justin Louis, Niamh Wilson, Joe Dinicol and Brooke Johnson.

Jordan Barker’s THE MARSH should have played in theaters. It stars two very gifted actors, the beautiful Gabrielle Anwar and Academy Award winner Forest Whitaker. The production company, Norstar Filmed Entertainment, provided them with an ample budget of approximately nine million dollars (according to IMDB). David Perrault’s cinematography was sharp and the overall production value of the film was very good. So, why did THE MARSH never have a wide theatrical release in the United States and go straight to DVD? Simple,
they just did not have a script.

THE MARSH is the story of successful children’s book author Claire Holloway (played by Gabrielle Anwar) who has been having recurring nightmares involving a scary looking house out in the country. She undergoes psychological treatment but none of that seems to help. One day while watching TV, she sees the landscape of the Rose Marsh Farm in Westmoreland County. She immediately recognizes the farmhouse from her nightmares. Claire then decides to spend her vacation at the farm—which is located near an old, spooky “marsh.”
While staying at the house, she is haunted by various paranormal phenomena.

She repeatedly witnesses the spirits of a little girl and a teenage boy. Having no real friends in town, except for the suspicious local publisher Noah Pitney (Justin Louis), she decides to contact paranormal consultant Geoffry Hunt (Forest Whitaker). Claire and Geoffry investigate the mystery behind the haunting and quickly develop a close bond. Together, they unravel the tragedy that happened in the farmhouse some twenty years ago.

Michael Stokes’ screenplay is unoriginal, unrealistic and un-scary—if that is even a word. It relies too heavily on over clichéd plot devices, such as ghosts that lurk behind the protagonist in the mirror but disappear as soon as she turns around or supporting characters that seem to only exist so they can be killed off later—and for no apparent reason other than to show that this ghost means business! No one in town seems to notice when someone ends up dead in such an unexplained fashion. It seems like one mysterious death, let alone several, would have the towns folk and the police in a state of emergency. As usual, the plot holes get worse later on as Stokes tries desperately to tie up all the loose ends. It is common to have a twist at the end of these types of films that puts things into a new perspective. THE MARSH does have one of these twists and
although I did not see it coming, it really does not ad anything necessary to the story.

Jordan Barker’s direction has a good sense of style. He knows how to make a film visually appealing. However, the scare scenarios could have used better set ups. Through most of the film, it feels as it Barker is relaying too heavily on the music to make you jump out of your seat. Stingers in the score should be used sparingly to enhance the scare scene but the set up has to be scary before the music is added for it to work effectively. The chemistry between Anwar and Whitaker is there, they just do not have a lot of work with.

All the technical aspects of the film (special effects, lighting etc.) are on par with major studio releases. It was a shame to see a lot of talent go to waste. THE MARSH is yet another example of a horror/suspense thriller with absolutely nothing new to ad to the genre. These types of “haunted house” movies have been done to death and much better in the past, I might ad.

Personally, I recommend Medak’s THE CHANGELING, Koepp’s STIR OF ECHOES, or the Kubrick/King classic THE SHINING as examples in what to do. THE MARSH is a perfect example in what NOT to do. I can only recommend this film to the most diehard fan of haunted house movies or if you have a major crush on Gabrielle Anwar. 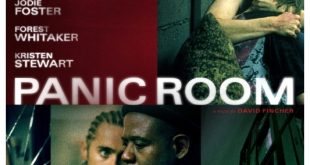