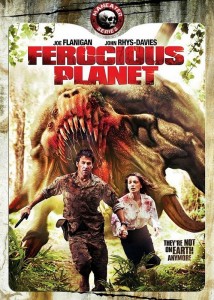 A groundbreaking device is designed to glimpse alternate universes. But when the machine malfunctions and transports a group of observers into a nightmarish dimension of alien terrors, the travelers must use ingenuity to survive.

Ferocious Planet is yet another creature feature from the SyFy channel and all in all I would have to say it isn’t half bad. It isn’t great, either. I admit I do have a certain affinity for these films as they basically serve as cheap entertainment for a lazy Saturday afternoon. Funny I watched this at about the time I’ve started to catch some of the episodes of “Through the Wormhole” with Morgan Freeman. Whereas that show can get pretty deep and confusing, to say the least, there’s something to be said of the comfort of cheesy science fiction movies that deal with parallel dimensions and alternate universes. In the movie world they seem to exist for only one purpose: to get unsuspecting people to travel there so they can promptly be attacked and eaten by all sorts of weird looking creatures. Simple and fun. 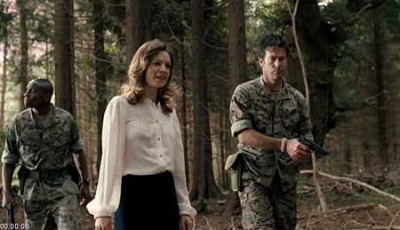 Dr. Jillian O’Hara has made a scientific breakthrough. She has created a machine that can peer into other worlds that parallel our own. And deep in the bowels of the Federal Science Institute building in Washington D.C. she is about to unveil her nifty little machine for a select group of important people. Included in this little get together is Dr. Karen Fast, science advisor to the president, Senator Jackson Crenshaw (played by John Rhys-Davies) and disgraced and dishonored Colonel Sam Synn (Joe Flanigan).

As Dr. O’Hara begins her presentation there is the predictable scoffing, particularly from Senator Crenshaw who, bless his soul, seems to be genuinely concerned that it could be a waste of taxpayer’s money. Everyone else seems just as skeptical, that is, until something goes horribly wrong and they are sucked into one of the parallel worlds.

At first everything seems fine. They are still deep underground in the same room and for the most part things seem pretty normal. That is until they step outside. It doesn’t take long before they find out that they are not alone. Inhabiting this strange new world is a very large dinosaur / alien like creature that likes nothing more than feasting on human flesh. Add to that the fact that Dr. O’Hara’s machine has been damaged and they only have six hours to get it fixed or else, it’s safe to say our little party is in some serious danger.

Ferocious Planet is one of those movies that is what it is. The plot is nothing really new though there is one cool and pretty satirical twist towards the end so props to the writer on that. However, there is a very bad and just so out of place “Jaws” reference that it will make you groan, and not in a good way. I see what they were trying for but they really should have gone with a different line. The dialogue for the most part is pretty standard with my favorite line being “Don’t poke the alien.” 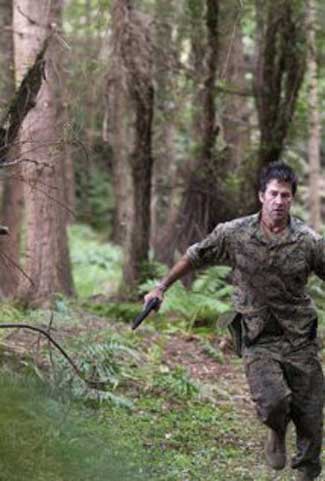 The CGI isn’t all that bad considering the budget. The alien creature is actually very cool looking despite the fact that it seems to be a combination of several creatures from films past. It’s appetite for human flesh is insatiable and darn it, what more can you ask from a monster? The kills aren’t exactly all that varied but are fun just the same. 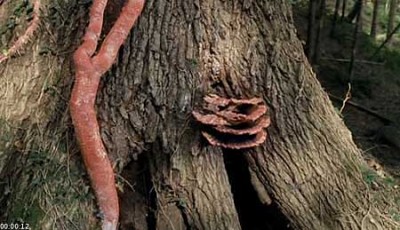 The action comes pretty fast and furious and there’s not much down time. There is one funny quicksand scene which was nice to see. When it was over it dawned on me I hadn’t seen a good quicksand scene in quite some time. Go figure.

All in all I’d say Ferocious Planet is a film that ranks about in the middle of the SyFy creature feature canon. Not great, not bad. See it once if you love these kind of films. If nothing else it will make you realize that no parallel dimension is complete without some kind of large, flesh eating creature.

Available from Vivendi Entertainment  from the Maneater Series 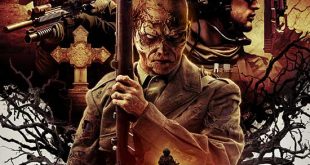 John Rhys-Davies Vs the Undead in SOLDIER OF WAR, available On Demand this March