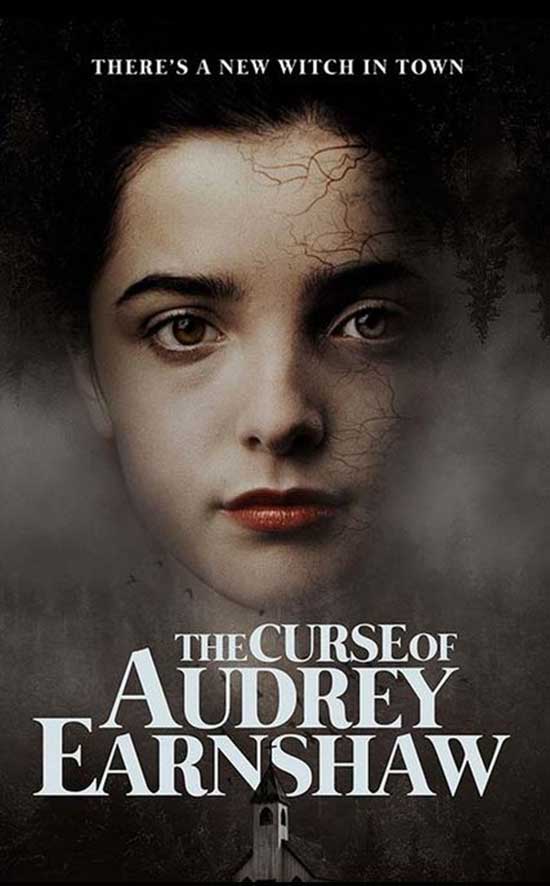 Set against the autumnal palette of harvest season in 1973, THE CURSE OF AUDREY EARNSHAW explores the disturbed bond between Audrey, an enigmatic young woman, and Agatha, her domineering ‘mother’, who live secretly as occultists on the outskirts of a remote Protestant village. As the community is besieged by a pestilence of unknown origin: children, fields, and livestock begin to die — yet the Earnshaw farm remains strangely unaffected. As mass hysteria sets in the village, the townsfolk commence accusations against Audrey and Agatha of witchcraft.

The air is brisk, the moon is making appearances every night. The “pandemic” is bringing out the best and worst in humanity. The first day of fall or Autumn equinox on September 22nd. Some of the horror community has anointed September as “Halloween Eve.” Maybe because of covid or the fact that Halloween often feels rushed and passed by, Old Saint Nick (or Krampus) and Christmas. Summer is often rushed, time in general seems so rushed. Time is precious. Enough of my tomfoolery, The Curse of Audrey Earnshaw, written and directed by Thomas Robert Lee.

This is a fascinating tale. I appreciate a good supernatural film. The Curse of Audrey Earnshaw tosses religion, folklore, and beliefs around. It’s autumn 1973, in this movie as we meet Agatha Earnshaw (Catherine Walker) and Audrey Earnshaw (Jessica Reynolds). 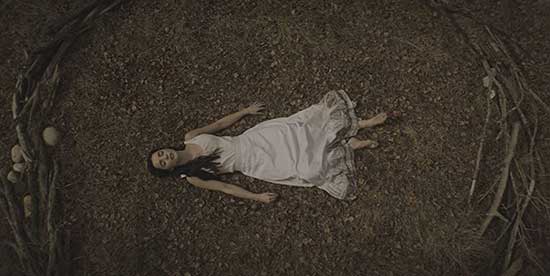 Agatha is taking Audrey somewhere; they are interrupted as they pass a funeral. Mind you that Agatha stuffed Audrey in a box in the back of an old wagon. Catherine Walker is so good in this role. Agatha is an overwhelming force of nature. There is an intense moment during the funeral.

Colm Dwyer (Jared Abrahamson) finds Audrey and brings her in from the cold. His wife Bridget (Hannah Emily Anderson) is asleep. Audrey and Colm are having a conversation. Audrey’s out in the back yard now. She’s outside in the yard with a shovel. Bridget might be in trouble. Strange things start happening. Pestilence and odd behavior. (The apple scene was creepy.)

We are on the “descent.” Agatha must feel or know that Audrey did something. There is something coming. Audrey is seeking revenge. Bernard (Don McKellar) is in church and he has something to say. He is talking about the “tragedies” that are happening. (It’s odd because it’s not 2020 in this movie.) Lochlan Bell (Tom Carey) goes to see Agatha. The people in this town are all looking a bit sick.

Lochlan wants to know how Agatha’s crops are still thriving? How she is maintaining despite the rest of the town struggling with so much loss. Bridget and Colm are struggling and going through a difficult time. Alexis McKenna plays young Audrey. Deirdre (Geraldine O’Rawe) goes to visit Seamus (Sean McGinley) to discuss the possibility that someone saw Audrey. Seamus goes to see Agatha; he tells her about the other man who poisoned his family.

Colm shouldn’t have left Bridget alone. Agatha wants to leave and Audrey wants to make a point. (“you’ve made you’re point” right as I type that, Catherine Walker’s character Agatha says that to Audrey.) Bridget doesn’t want the baby. This is so horrific and emotional. Hannah Emily Anderson delivers such a powerful performance. Burke (David LeReaney) is making his house call to help Bridget. (He reminds me of a doctor we used to go to when I was a kid. His wife was his nurse, they had all sorts of folklore, occult art, and black magic type fixtures. It always made me wonder. You would drive down this hill to a hidden driveway and a hidden building. His equipment seemed ancient to me but, I was a kid. I guess I thought well, this is what all doctors are like. Maybe a mad scientist or something. His wife would breeze by you and stop to look at something. Her glasses were always low on her nose.)

Colm talks with Seamus and how for seventeen years everything traces back to the eclipse. Every one of these people seem to be trying to fix something but it’s not working. Ritual, occult, and withy type films are always fascinating. You want to see what kind of history the filmmaker goes with, the backstory, the way people act. Seamus tries to confront Audrey. Not the best idea. The special effects and the creepy white out eyes along with Jessica Reynolds as calm as a cucumber. This movie has some great moments.

This movie makes you ask questions. Our beliefs, do they control us? Do we strictly believe in what we think is right? Does it make us better people? I feel like there is more out there in the world and beyond the galaxy. Everyone is coughing up blood. Some people skip the occult stuff and think about stress. Is it stress making us think that these two women are powerful “witches” or “occultist?” Why do women get judged this way?

Deirdre sees Seamus as Bernard. This is wild. Audrey is one hell of a presence. She is like Carrie accepted the devil. Is there a sacrifice? Why does it seem like the good people of the town have lots of sneaky secrets? There is something coming. This is a bewildering supernatural film. Make sure to check out The Curse of Audrey Earnshaw and be kind to one another, even your neighbors who go out and dig holes in the yards.

“May Your Nightmares Inspire you.”