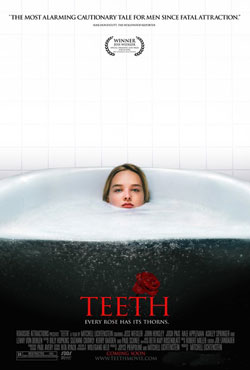 When virtuous high school student Dawn (Jess Weixler) becomes the victim of a sexual assault, she discovers that she has an unexpected line of defense: a toothed vagina. But for Dawn, coming to terms with the power and dangers of her anatomical anomaly may be easier said than done. Director Mitchell Lichtenstein’s provocative feminist horror flick also stars John Hensley, Hale Appleman and Josh Pais.

Even though I’m not a big fan of horror-comedies in general, I absolutely loved “Teeth”. Not only was Jess Weixler (as Dawn O’Keefe – her name rhymes with teeth) gorgeous to look at and very believable but everybody involved gave outstanding performances considering the nature of the plot and the fact that most of the cast haven’t been in anything notable before other than small TV parts. Certainly, it’s because they all took it so seriously that the characterisation was a lot more than just padding and, for once, there were some great characters who really left their (teeth)marks.

Going back to Jess Weixler for a moment (it’s hard not to), her character development from a religious “chastity ring” wearing naive teenager into an uber hot, sexually active, young woman was quite a joy to behold. It’s a kind of “coming of age” story along the same lines as “Ginger Snaps” but without all the hairyness and with more nudity. Yes, Jess Weixler gets naked in this film and that is always a bonus but you can even see how she is changing with subtle use of sexier make-up and her overall body language. As many people will also note the similarities to “Carrie”, Jess Weixler is like a much prettier version of Sissy Spacek except that she’s not ginger and can actually act. Her character also has something scary hidden inside her lady garden and that’s much more frightening than telekenesis.

“Teeth” is, however, at its core, a kind of black-comedy so it could have gone horribly wrong if it weren’t for everybody playing it so straight. It’s very easy to forget the silliness of the whole idea which is a great for those of us who always wish for a “willing suspension of disbelief” when it comes to horror. Only one sicker reworking of the opening scene of “The Hand that Rocks the Cradle” will have you on titter-alert and you will certainly chuckle at the operating room scene later but everything else is just great storytelling.

It’s also a real “back to basics” horror film too with no nasty grainy, shaky handycams or overtly computer generated gimmicks. Everything looks like a movie should do with nicely framed shots, vibrant colours and there’s no intrusive background music to distract you from the visuals either. In other words, it looks and feels just like something Lucky McKee would do but it’s even better. If you liked “May” or “The Woods” then you’ll certainly enjoy Mitchell Lichtenstein’s “Teeth” as well.

I’m sure this was low-budget but I say that tentatively as it’s certainly not one of those ridiculous home video efforts. This is real indie filmmaking not glorified YouTubing. It even has John Hensley (Matt from “Nip/Tuck”) in it and not just as a five second cameo either. He plays quite a nasty piece of work too and possibly the only predictable thing about this film is that you just know that he will eventually get his commuppance.

Gorehounds might be disappointed that you don’t actually see the eponymous teeth in action, just the reactions as they chomp down and the practical effects used for the aftermath, but that’s more than enough. A lot of men with a more nervous disposition than myself probably won’t want to see either.

Girlfriends and wives everywhere can now get revenge for being dragged along to see all those “Torture P*rn” films over the last couple of years. Double-bill this with “Hard Candy” if you really want to see your man squirm! The only fault is that all the males are made out to be predatory and there’s no real happy ending except for Dawn’s final empowerment. So, guys, if you find your lady listening to a lot of the “Spice Girls” and then she asks you to watch this, be warned that she may have something to tell you!

If you haven’t seen “Teeth” yet or haven’t even heard about it then I recommend that you rent or buy it immediately. This should be in everyone’s collection as it really was one of the most outstanding films of 2008. 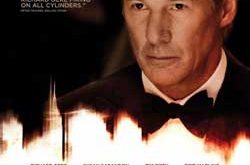