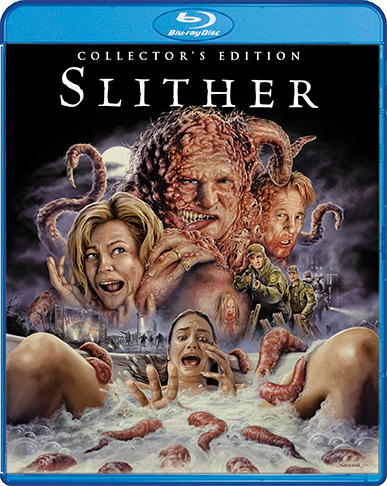 In a southern Mayberrian hunting town a meteorite crashes and a small, cephalopodan parasite begins to wreak havoc. When the infected townsfolk start turning into zombie-like alien hybrids by means of crazy death-worms, the world’s only hope rests in the hands of the do-good, love struck sheriff. This is a blood-soaked battle to save mankind and it is packed with schlock sci-fi/horror fun. Starring Nathan Fillion, Michael Rooker and Elizabeth Banks.

This flick was a nice, refreshing splatter of hot blood to the face. Slither is so steeped in stereotypes and lowbrow comedy tactics that it ate its way through the sub-c**kles of my heart and laid egg after filthy egg until I was in love. 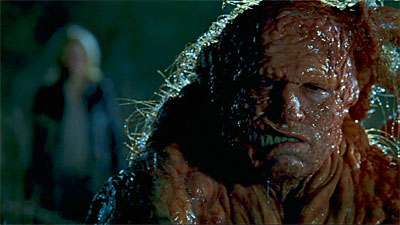 When a small meteor falls to Earth, a drunk local stumbles upon the weirdest looking creature this side of the Appalachians. What appears to be an angry jellyfish launches extraterrestrial ‘you’re-f*cked’ darts into our inebriated hero’s neck causing all sorts of alien goodness to ensue. Not only are we treated to a fun little alien-monster impregnating concept, but also we get to enjoy the resulting pregnancy with killer slug scenarios followed by decent zombie scenes all from a bumbling Barney Fife point of view. Honestly, this movie incorporates a multitude of fun horror sequences that one would normally have to watch multiple vintage B-Movies to see. 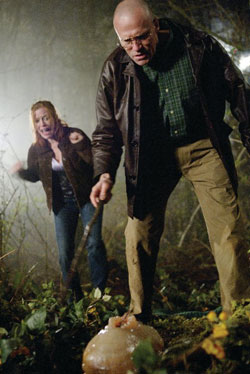 My interest was very much kept with the ever-changing antagonist constantly throwing the poor schmucks trying to survive for loop after disgusting loop. There were so many different incarnations of the monster(s) that nothing was left stagnant or boring. The clichés were numerous, but most of them were executed in a way that only added to the ambiance. 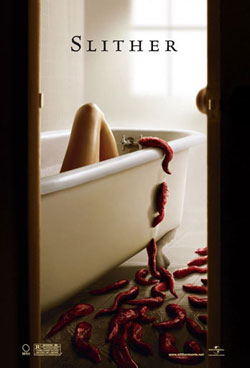 The cast and crew, I felt, were pretty damn good as well. Nathan Fillion made me laugh pretty hard with his facial expressions and, later, his growing ability to accept and deal reasonably with the increasingly grotesque situations. Gregg Henry was amazing as the foul-mouthed, angry mayor and brought a lot of hilarious authenticity to each scene. Michael Rooker and his raspy voice played the role of Grant, the psycho alien beast, like it was an elegant grand piano. He delivered some of the greatest one-liners with the driest of tones. I had never seen an actor fit so nicely into such a bizarre role since Elizabeth Banks (the female lead) was cast in my dreams. James Gunn obviously knows what vintage horror elements are appealing by today’s standards and how to present them to this generation’s audience. His love for old, disgusting violence was pretty much pouring out of every slime covered scene. He doesn’t just nod politely to gross-out classics as much as he head butts them in the face. 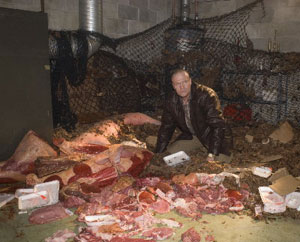 The only problem I had with this gem was that it really didn’t delve deep enough into anything that could have been considered a complex plot. Yes, there is an ever-changing intergalactic hell-slug and yes, there are survival strategies mixed with a romantic subplot but there was no real story to latch onto, just a series of violent events. I also would have liked to see the climax go a little further than it did. Sure, it was intense and I still drank it down like it was a bottle of cheap whiskey I was able to get for three ninety-nine because of my rewards membership card but I couldn’t help feel like the finale could have been more, that’s all. I’m not saying I didn’t like the ending, mind you, I am just pointing out that I thought it could have had more climactic craziness. 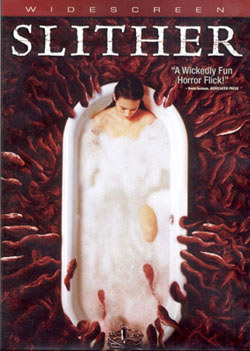 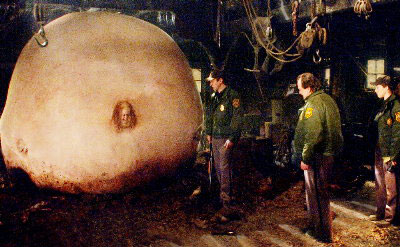 As a long-time friend and confidant to you, I must recommend this movie. I remember you telling me how much you loved Shaun Of The Dead over and over because it was funny and scary at the same time so I must tell you that you really should watch Slither. This movie was executed with the idea of making a fun drive-in flick with today’s horrific and appalling need for gross-out violence quenched while suturing the scenes together with stitches of sci-fi and horror goodness. Honestly, I only have your best interests in mind when I recommend movies to you so please understand that it is with the utmost sincerity and regard that I suggest this little flick to you now.

Slither (2006) is now avalable on bluray per shout Factory