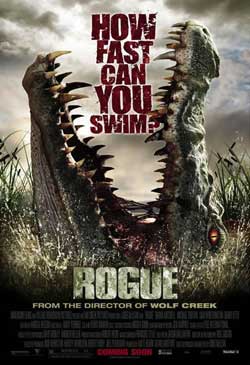 QUICK FIX:
A jaded & cynical American travel writer on assignment in Australia’s Northern Territory takes a guided riverboat cruise as part of his job. Going deeper than they should into the Territory to answer distress flares, the group winds up stranded on a tiny island in the middle of the huge river. With the boat beyond repair and the water rising fast, their only hope for survival is to swim the 100 yards or so to shore. Only one problem with that plan though – there’s also this nasty, oversized crocodile with hunger in his eyes and a human buffet on his mind between them and the shore, and only Michael Vartan and his deadly five o’clock shadow can get the tourists to safety!

RAMBLINGS:
I have to admit that one of my all-time favorite sub-genres of our beloved horror movies has always been giant crocodile (or gator, depending on the storyline) flicks. Sad thing is though is that much like werewolf movies in the last 25 or so years, the misunderstood giant reptiles gone amok movies have hardly ever been done right in my eyes. For every classic giant reptile movie we get like ALLIGATOR, LAKE PLACID, or EATEN ALIVE, we also get bludgeoned with sh*tfests like CROCODILE, SUPERCROC, and the so-sh*tty-it’s-not-even-funny SyFy Channel premiere from a couple years ago – LAKE PLACID 2…don’t even get me started on that one.

Thankfully, ROGUE not only lives up to my expectations of what a kickass, suspense-filled giant croc flick should be, but actually exceeds said expectations, and that makes me happier than a stripper with a thong full of $2 bills! Mr. Vartan, who I have not seen much of lately since ALIAS ended, was a pleasant surprise here – not my first choice for an action hero, even of the reluctant hero variety, but he pulls off his character arc flawlessly and takes charge of the situation when I least expected it. Rhada Mitchell (PITCH BLACK, SILENT HILL) brings the beauty-with-tough-attitude as the tour boat captain, and for once gets to keep her native Aussie accent and yes, that makes her even hotter to me! Also, look for WOLF CREEK’s John Jarratt in a small role as a grieving widower…sadly, not nearly as meaty or fun of a role as he had as WOLF’s Outback psycho Mick Taylor but still, it was nice to see him again – awesome actor!

Greg McLean has done it again! For his 2nd genre film that I’ve had the pleasure of seeing on these shores, he has totally switched gears within the genre, but once again managed to knock it out of the park. I said it years ago when WOLF CREEK came out, and I’m saying it again now – this dude is one to watch. He gives us a suspense-filled horror movie in the style of “hey, this is real – it could happen to anyone.” Not as much blood, gore, or chomping in this one as some other movies like it – the emphasis here is on realism and let’s face it; crocs attack fast, swift, and mean – so most of the kills are either very quickly done or done off screen, but the tension is still there no matter what. Sometimes it really is more frightening when things are left to the imagination. And while we’re at it, let’s talk about this oversized croc for a minute – by far the best CGI creature I’ve seen in recent memory done on a smaller budget. You can tell the pride the filmmakers took in creating the most realistic-looking croc imaginable, and it’s obvious that most of the budget went into it, and I for one am grateful for that.

LAST WORDS:
Was this a perfect flick? No. Some major suspension of disbelief is required a couple of times near the end in order to keep things moving along. But, those instances were very easily overlooked this time out since it didn’t take long at all to get sucked back in by the realistic tone of the rest of the story. And, the most important thing of all, to me anyway…I was never bored – the action was fast and swift, just like a real croc attack. If you’re a fan of the giant reptile on a bloodthirsty rampage type of horror movie and would like to see some actual plot development, character arcs, and characters you can care about for once instead of just typical bland stereotypes that you can’t wait to see get eaten, put this damn movie in your collection!!