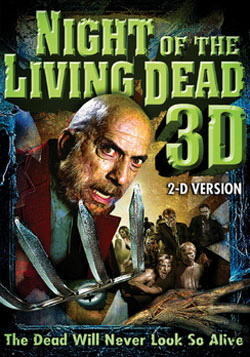 Barb and her brother Johnny travel to the country for the funeral services of their aunt, but they arrive late and drive direct to the cemetery. They see the location empty, but sooner they are attacked by zombies. Johnny escapes in his car leaving Barb alone, but she is rescued by the drug dealer and college student Ben. He drives his motorcycle to the Cooper farm, and the patriarch Henry Cooper does not give credit to Barb. When the farmhouse is under siege of a group of flesh-eaters zombies, the local mortician Gerald Tovar Jr. arrives and tells a scary story about the origin of the zombies

Before we get into the review, there’s a little bit of back history here in store. As you all know the original went under the title “Night of The Living Dead” and filmed in 1968. Of course the legendary film went on to inspire others, sequels and copycat titles. The 2nd official, and first remake also went under “Night of the Living Dead” and shot in 1990. This was a bold remake that followed the original storyline though with new gore, new actors and ..well, a 90’s edge to it.

Now swing forward to 2006 and we have Night of the Living Dead 3D. Though when it was released, it actually came out in 2 versions which the 2nd being called Night of the Living Dead 2D. To curb the confusion, really its the same movie but without the annoying 3D effect. I say this because to me old school red/green 3D is just hard to watch long without getting a headache. Not to mention the color values are way off really making it just a novelty in a sense but not really that amazing as the 3D effect they are using in theatres today. So there you have it…all in a ball of wax.

The DVD I’m reviewing is the 3D one, though I chose the 2D version to watch to keep my headaches at bay. Now is this a sequel or remake? Not quite. The main character Brianna Brown is called Barbara (Barb for short) though after the opening graveyard visit it pretty much is a re-envision from there. In fact I wasn’t sure if it was more a revisioning or a homage to the original. You’ll get the humor when she runs into a nearby house for shelter and the pot smoking family inside is sitting around watching the original on TV. When she exclaims that “zombies are coming”, its also hard for them to take her serious at least at first. Sid Haig plays a lead in this film as well as the bubbly, zany Gerald Tovar, Jr….who is a local mortician and funeral home owner that the zombies seem to have emerged from as ground zero. His choice of weapon? a shovel and some tasty backtalk.

The film is not intentionally meant to be a comedy, but it does have it’s share of make you smile moments. I think it recognizes its audience and the logic of thinking we viewers bring to the table so that they can comment appropriately. The trapped family in this instance are the Coopers who’s choice of lifestyle makes it hard to call in the local police for help. Greg Travis plays Henry Cooper, while Johanna Black plays Hellie Cooper. Joshua DesRoches plays Ben who is the immediate wannabe hero a friend of the family who rescues Barb before she can be attacked by an coming mob of walking corpses.

We find out pretty quickly that when Gerald Tovar shows up as the family begin to board up the house that he is party responsible for the body count. It seems Gerald took alot of bodies in over the last 2 years in the aim to have them cremated. Though his anxiety over burning bodies and the fire prevented him from carrying out the deed leaving them in his basement to collect. So once the dead began to reanimate on there own these bodies were free and able. We are explained that the buried ones are too weak to dig themselves out. hmm…… I like the logic there. Good to see that the writers took “sense” into this version of the film

FX and makeup are the stars in this film that tells me that the team led by Jennifer Albrecht have had a long time prior to be inspired by zombies and undead enough to pull the job off pretty well.

The Behind the scenes is informative and entertaining. As the director explains that the film originated out of his desire to redo the public domain film “I bury the living”. This was replaced with a higher profile public domain name “Night of the Living Dead” in which the investors would finance under that condition. It was also conditioned to include some pot smoking humor which is a bit bizarre to request but actually does help the film on many levels.

NOTLD 3D clocks in at a small 75 minutes, but seems appropriate keeping the action going and not boring us with dramatic slowdowns. I’ve seen alot of zombie films lately and this one keeps my attention far better than others of its genre. Haig is entertaining as always and you most likely find yourself laughing at the most unassuming spots I’d give this a go if your a zombie fan as it’s a fun little ride.

The DVD is being released on by www.4digitalmedia.com

Night of the Living Dead 3D