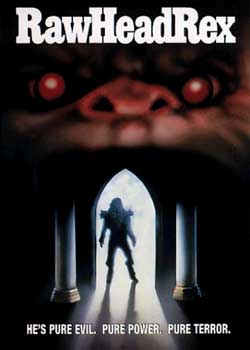 The Irish village of Rathmorne is never going to be the same. You see underneath its countryside lays the forgotten god king Rawhead Rex. A group of farmers unknowingly unleash the god king back to his kingdom. Rawhead determines that its time for everyone to remember.

“He was here before Christ, before civilization. He was king here!”

My freshman year of high school brought on many new changes into my life. I went on my first date, I drove my first car (granted it was with a learners permit), and I discovered the name Clive Barker during a late night showing of Hellraiser and Hellbound: Hellraiser 2 on Cinemax. I was instantly hooked and began to devour everything related to Mr. Barker that I could (the same thing had happened when I was younger with Wes Craven much to my mothers dismay). One of the first things I discovered was The Books of Blood. In volume three of these nasty little collections was a story called Rawhead Rex. After devouring the book I was scrounging my way through a local video rental store when I saw the box depicting Rawhead. “They made a movie outta that?” I thought to myself as I took it off the shelf. That night I made my entire family suffer through what I thought at the time was one of the greatest monster movies of all time. I still feel that way of course, but some of my tastes have changed.

Rawhead Rex takes place in the Irish city of Rathmorne. The movie begins by showing a group of men in a field attempting to move a giant rock. Now this is no ordinary giant rock, obviously this thing was put here for a purpose. I would think that the engravings near the bottom of the stone would be warning enough, the men however are working with a purpose. One of the men at least is working with a purpose, a storm is starting to brew up and the other two workers think that its time to head home. The lone farmer continues to work on the stone after his help leaves.

We are soon introduced to the local church in Rathmorne with Declan O’Brien leading the congregation in song. The movie goes back and forth between the church and the man in the field when suddenly a bolt of lightening comes down from the sky moving the huge monolithic stone. As the stone is removed a woman in the church reaches for a vase of flowers and is burned severely. We see Rawhead climb his way out of the earth and lunge for the unlucky farmer.

After all of this excitement we are introduced to Howard Hallenbeck and his family. Howard has a wife named Elaine and two children Robbie and Minty. For the last six weeks the Hallenbecks have been following Howard as he does research for his book. The books subject is supposed to be the grounds where churches in the countryside are built; he believes them to be built on holy sites before Christianities Influence. He arrives in the church and sees Declan who is rather snobbish to Howard especially when Howard asks about a very strange stained glass window depicting Rawhead. He is directed by Declan to the true reverend of the church Rev. Coot.

Rev. Coot is a lot different from Declan; he is friendlier and more than willing to help Howard with his book, even if it does deal with paganism.

It doesn’t take long for the body count to begin swelling as Rawhead begins to attempt to take back his territory. There are some scenes in the film that did surprise me, especially when around this time the censorship in England was rather strong. You see all kinds of throat chewing, an implied murder of a child, a pregnant woman attacked, trailer park destruction and a rebaptism of Declan by Rawheads own urine (yes I said that right).

One of the most memorable scenes though depicts a young girl running with her lover through the woods. She is holding tightly onto her lovers hand when Rawhead lunges out. In her fear she continues to run until she gets back to the trailer park. She turns to ask her lover to speak up and tell everyone what they have seen, only to discover that she is holding onto her lovers severed hand.

Let’s talk about the monster for a second. In the beginning of the film Rawhead looks pretty impressive, but as the film begins to show close-ups of our god king he starts to look more like a member of the band Gwar. Clive Barkers influence is definitely visible however in Rawheads torn leather attire that predates the leather attire worn by the cenobites in the Hellraiser movies.

This is the second mainstream film (I believe) based on the works of Clive Barker. Of course he wasn’t happy with it, which lead to his directing of Hellraiser. However I feel that if you are into a good monster movie give Rawhead Rex a try. It’s not everyday you see a guy in a suit tearing through a trailer park after all is.