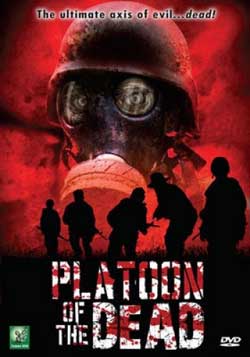 Three soldiers must fight to survive the night in a seemingly abandoned house, when a zombie platoon attacks.

Another adventure into the advent of an impending zombie apocalypse paves the way for director/writer John Bowker’s vision of Platoon of the Dead. A mix of army drama and stereotypical zombie attacks provides an uninteresting flick about how to survive while being in a constant state of running from a fleet of zombie soldiers.

Meet Private Joseph Dillon (Tyler David), a cowardly but alive soldier waking up from a massive attack from enemy troop of zombies. His setting is a forest, covered with dead leaves as if the film takes place in the fall. Pvt. Dillon searches the forest for any sorts of life, but finds his impaled partner Jacoby pleading for an end to the pain. In this scene, we are revealed the new technology of guns with lasers that eliminate the enemy by paralyzing and then making them disappear onto a red-tinted ground. The guns seem silly, as watching a laser tag battle accompanied by cheesy CGI instead of actual guns that shoot bullets.

Pvt. Dillon finds two others from Platoon 749, Lieutenant Roberts (Chris Keown) and Sergeant Butler (Tom Stedham). Sgt. Butler is the typical steroid rage infused soldier, cursing every other word and angered by being defeated by the army of zombies. Stedham’s portrayal of Sgt. Butler is comical at times, while his overplayed ego comes over sarcastic more than seriously pissed off. Lieutenant Roberts is calm and collected, and seems to be the peacemaker in the trio. He is also the leader of the pack, being the highest ranking officer, which bugs Sgt. Butler. Private Dillon is very submissive in nature, and must deal with egocentric Sgt. Butler questioning his masculinity all the time.

The three soldiers come upon what looks like an abandoned house, in which they make an accord to stay the night. In the house, three women emerge as runaways for the zombie army. Even though the women are introduced in a random nature, back stories of the women and soldier’s previous lives are plugged briefly through conversations and dreams. Stacy (Michelle Mahoney) is the leader of the three women is very forceful in nature, and Heather (Ariauna Albright) is the speaker of the group. The females agree to the let the soldiers rest in the house, and put Sgt. Butler outside on guard due to his ill temperament.

The zombies are mostly adorned in camouflaged outfits, like what the human soldiers are wearing. However, the zombies are also wearing gas masks. When cutting off the limbs of the zombie soldiers, a sort of butterscotch pudding and chewy melted caramel mixture emerges from their body which aides the unrealism of the movie in its entirety. The zombie’s makeup is not very in depth, making them look not quite zombie-like in nature but also almost human.

The chase scenes where zombies run after the human soldiers are also filmed as if the cameraman is running with the camera, giving the viewing a very uneasy/shaky feeling. This accompanies the often soldier’s means of survival, “either run like hell, or stay and fight like a man.”

If meant to be futuristic, the movie fails to accomplish this means in the way of using laser tag guns in a battle between Team Human and Team Zombie. The acting is a bit shaky, and delivered sarcastically at times when the character is seemingly trying to be serious.

Bowker’s Platoon of the Dead has not as much gore as most zombie flicks contain, and the low budget gross-out props are put together quickly but do kind of get the point across of what exactly is coming out of a zombie or human body. All in all, the laser tag battle between humans and zombies is overhyped through more boring conversation of what is happening, rather than showing more of the fight between the living and the undead.