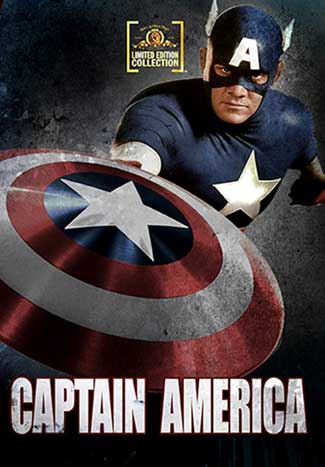 Based on the bestselling Marvel Comics series, CAPTAIN AMERICA stars Matt Salinger (What Dreams May Come) as a crime-fighting superhero whose strengths and abilities may save the United States from nuclear destruction.

During World War II, a brave American soldier (Salinger) volunteers to undergo experiments to become a new super-soldier, codenamed “Captain America.” Infiltrating Germany to sabotage Nazi rockets pointed at the U.S., Captain America faces off with Nazi superhuman warrior Red Skull (Scott Paulin, The Right Stuff) who defeats the hero, throwing him into suspended animation. Frozen for 50 years, Captain America is found and revived only to find that Red Skull has changed identities and has targeted the President of the United States (Ronny Cox, RoboCop) for assassination. With America on the verge of utter chaos, it is up to one man to save the day!