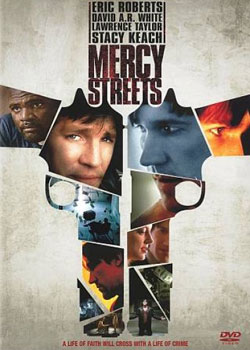 John (David White) is a small-time criminal who, upon his release from prison, is met by his former partner and brother, Rome (Eric Roberts). Rome wants John to join him in a counterfeiting scheme that could earn them $20 million. John is trying to go straight, but he needs to raise money for a real estate project he’s trying to get off the ground, so he agrees to Rome’s scheme, despite grave misgivings.

Family values are taught at a very young age, and when a value is broken to disconnect the bond between siblings, no mercy can be rewarded no matter how much one tries to run away from the past. The best option is to accept your past, deal with the consequences, and strive to help better family connections. For once everyone else has turned their back on you; you are only left with the love and support of a family member. In John Gunn’s Mercy Streets, John (David A.R. White) and Jeremiah (also played by David A.R. White) are twins who struggle with a family bond that was severed in their teenage years, and are eventually reunited to fix past mistakes that haunt them to the present day. 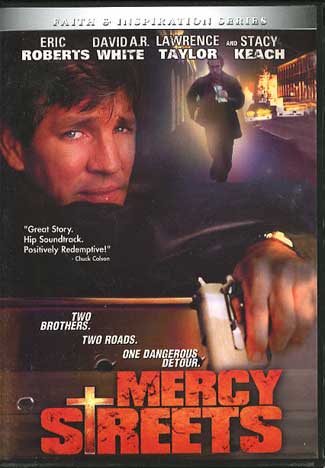 The film begins with a short scene showing an Episcopal priest in confessing his sins from the past of murdering his brother. This instantly sets the stage for a family/religious related thriller about past actions effecting one trying to clean his act by choosing religion. The scene cuts to three days, in which we see what looks like the same guy being released from prison. He is picked up by a fellow con, Rome(Eric Roberts), and is instantly talked into going back into business of counterfeiting. Rome is reluctant to letting John free, and lets him out to do his deal with the usual unaware customers. John is shown walking down the streets of Chicago, IL, and immediately cons a vendor out of $10 bucks in one swift movement. Armed with $50K that Rome provided him, he goes to do his usually scamming with counterfeit bills and is accosted by a former friend Sunny. TJ(Robert LaSardo) and Rome bothers John, and demand the money that he got from his schemes. Rome demands that he raised John better than running from him, and tries to make John shoot him but refuses to do so. TJ steals the manila folder with the cash in it, and John gets away. TJ finds that the envelope is filled with maps, and jumps in the car with Rome to chase John. John loses the money down a sewer drain, and finds a quick getaway in a car. John escapes the big city, and goes to find the only ties he has in this cruel world.

John’s brother Jeremiah is shown preaching to a crowd of two. Neatly dressed in traditional Episcopal preacher regalia, Jeremiah is very professional with his speech. The crowd is made up by his beautiful girlfriend, Sam (Cynthia Watros), and roommate/cop Tex(Shiek Mahmud-Bey). They both give Jeremiah constructive criticism, and an instant disconnect in Jeremiah and Sam is portrayed by Jeremiah’s strict passion for getting his work done and Sam’s wanting to have a creative outlet through art school that is not offered in the suburbs in which they live. In the morning, Sam continues to talk to Jeremiah about wanting to teach art and Jeremiah proposes marriage to her. Sam instantly is offended, thinking the only reason he wants marriage is to keep her there, and Jeremiah is distraught and goes for a run.

Luckily John finds Jeremiah’s place while he is out on his run, and walks in as if he were Jeremiah. Jeremiah is mistakenly caught by TJ and Rome, and they take him away to their secret hideout. John dresses in Jeremiah’s clothes, slightly changing his hair, and immediately takes the role of Jeremiah. He sees Sam come in, and comforts her more than Jeremiah ever did. While John is reaping the benefits of his brother’s identity, Rome is antagonizing Jeremiah until he tells him he didn’t know John was still alive. A childhood accident is revealed in which John was believed to be dead, and Jeremiah actually witnessed Rome taking John away. His hidden past he tried to keep secret is revealed, and now he must deal with consequences that he thought he would never have to.

Being awakened by Tex, John is suddenly in terror when he has to give a speech in front of a crowd in church. He dresses up as Jeremiah, and gives an impromptu speech about giving money that would fill the offering bowls. While John plays Jeremiah, Rome is teaching Jeremiah the tricks of the counterfeiting trade. John sets up a phony foundation to scheme money from people with children, and takes Sam out to dinner and date at a roller skating rink. The mood changes after a scene that Jeremiah goes to the big city and finds John’s apartment. He sees that John has had an intense hatred towards his brother for never rescuing him, and is instantly scared of what he will do to his semi-perfect life.

Tex talks to Sam, and starts asking her if supposed “Jeremiah” was acting strange lately. When she refuses to believe so, she meets John for dinner and John instantly tells her he doesn’t love her and leaves. John then goes to confession, where we start at the beginning of the film, and tells the fellow preacher that he killed his brother and does not want to be a preacher anymore. By this time, Tex has realized the truth that Jeremiah’s brother John is still alive and is living in Jeremiah’s shoes. In a surprising turn of events, Jeremiah is consulted by a fellow preacher who teaches him the true meaning of life is to deal with the present and forget the past. Jeremiah dresses in the same outfit as John, and goes to help John out and the two meet on their way to Rome’s counterfeiting scheme. They battle for a little while, because of past problems but eventually forget these problems to return to old family values of having each others’ back. 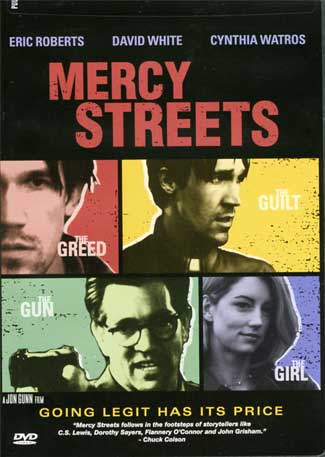 The film of mistaken identity and brotherly values was portrayed well by main protagonist David A.R. White. Both brothers’ emotional outcries are associated with being accepted into a world moving so fast that the past is nothing but a haunting presence that is trying to be buried by our unconscious. Eric Roberts played his typical role as being involved in gang dealing, and being the one who knows all the tricks of the trade. Jeremiah’s girlfriend played by Cynthia Watros also portrays the emotional problem of her own passion of art being in another location versus staying with the love of her life.

John Gunn’s Mercy Streets is a new spin on the classical mistaken identity/broken family ties story. While the twin brothers are forced into having to finally see each other again, they learn that there is more to life than a past that comes back to haunt oneself time and time again. Jeremiah not only gets the girl back through learning his lesson, but he also gets his relationship with his brother back after years of hiding.