In New York City the police are hardly viewed as a “helpful source” even back in 1988. Imagine the fear that begins to swell around the city when a uniformed officer starts brutally murdering innocent people. Young officer Jack Forrest is soon framed for the crimes, but as he sits in jail the death toll keeps mounting its up to the rest of the New York City police department to find who the maniac cop really is.

“You always take a leak with a gun in your hand? That’s a good way to blow your balls off!”

Maniac Cop returns from the lost 80’s archives with a brand new beautiful re-issue on Bluray from Synapse Films.

Just from reading the packaging of Maniac Cop you know that you are about to be in for a treat. Veteran genre actors like Tom Atkins and Bruce Campbell’s names are plastered on the front, then when you turn the package over you find that Larry Cohen wrote the script. Maniac Cop is also one of the films slated for a modern remake in the next year or so, with good reason its story could easily fit into modern times especially in New York City. It also spawned two sequels and there has been rumor that there might be a fourth.

Maniac Cop doesn’t waste any time before it gets going. A woman is walking alone on the streets when she is suddenly attacked by two youths who are trying to steal her purse. The woman evades the youths for a while until she sees a man in a police uniform. Quickly the woman runs up to the officer thinking that she has found salvation, only to be strangled to death by the hands she thought would save her. Detective Frank McCrae (Atkins) helms up the investigation to find out who exactly killed the girl, due to the size of the bruises on her neck he knows that the youths she was running from could not have done it. We are also introduced to another one of our main characters Officer Jack Forrest (Campbell). Jack and his wife are having marital problems, to the point where they are even seeing a counselor to help with their problems. While we are introduced to the two of the main characters the maniac cop strikes again, and this time he leaves a witness. The witness tells the police that it was one of them who were brutally killing innocents; Frank believes that the maniac is indeed a cop while the rest of the station believes it to simply be a maniac wearing a police uniform. 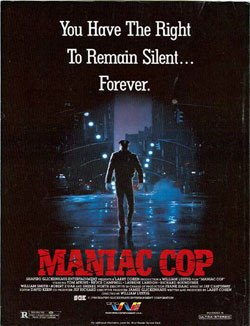 Jack Forrest and his wife are having a lot of trouble with their marriage and it finally becomes clear why when his wife decides to follow him after he leaves for work one night. Jack’s wife is starting to believe that he might in fact be the maniac and she has to know for herself. She finds that Jack isn’t the maniac however and instead he is cheating on her with another officer named Theresa. Jack quickly leaves after he is caught by his wife and it doesn’t take very long for the maniac cop to show up and brutally kill her. Jack of course is blamed for the crime and the city believes that they have found the maniac cop who is killing the innocent people of New York City. Its up to Theresa and Detective Frank McCrae to prove Jack’s innocence, and what they find along the way is the story of a good cop gone bad named Cordell who is out for revenge against the very same people he used to help. 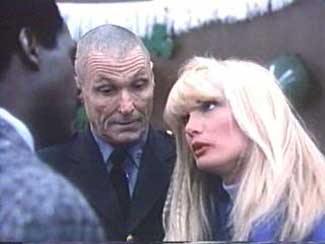 Will Lustig’s Maniac Cop was controversial when it hit theatres and video store shelves in 1988, and understandably why. Lustig has taken the city of New York and made it grimy, this is before the big clean up off all the strip clubs and sex stores and they are all seen with their neon lights shining against the night sky. Most of the scenes in the film also take place at night, making it very easy for Lustig to hide the face of Cordell until the very last reel; this makes him look entirely more ominous in the early scenes. When Cordell’s face is revealed at the end in the middle of the day he is almost laughable however.

There are a lot of memorable scenes captured in Maniac Cop. The most talked about however is the infamous shower scene where the viewer is learning what exactly happened to Cordell. Lustig made the streets of New York City look grimy and dismal, imagine what he has done when he shows the inside of the prison that Cordell is sent to (I didn’t really explain this set up because to the viewer it isn’t really explained until part 2). 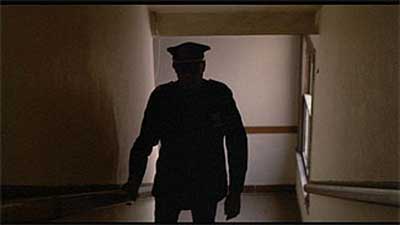 As Cordell is taking a shower three men rush into the shower with a shank intent on ending the super cop’s life. What takes place is a wonderfully filmed fight sequence, even if Robert Z’Dar is naked in fact that just makes him even more bad ass. Eventually the numbers game does take over and we witness the men brutally stab and then disfigure Cordell’s face with the shank. Another fantastic scene is the murder where Cordell leaves the witness. The poor girl sits alone in her car and watches as Cordell in a wonderful moment of super humanness throws his victim right at her windshield with great ease. 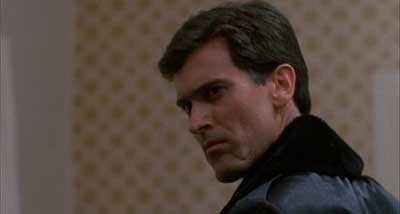 Lustig doesn’t waste any time with Maniac Cop, there is rarely a slow moment in the film and the cast does a very good job of handling their roles, even Bruce Campbell still seems to ham it up in only the way he can during some of the scenes. Tom Atkins is great as Frank and even Robert Z’Dar is great as the silent stalking menace Cordell.

Gore hounds are going to love this one as well, not only for the brutal end of the shower fight I mentioned above but Cordell just slaughters people when he gets his hands on them. The later sequels of course took this violence to more escalated levels but there is still plenty of the red stuff all around this one. 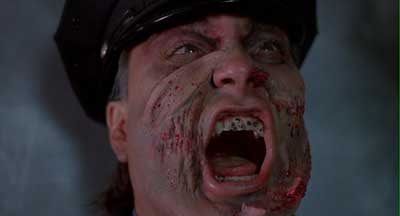 Maniac Cop is definitely one that all collectors should add to their own libraries and its recent rerelease onto DVD is definitely a welcome one. The rumors of a remake I fear will send this title to the realms of CSI crime shows and night time television so watch the unsanitized version before it is too late.