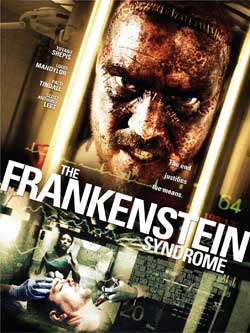 A group of researchers conducting illegal stem cell research discover a cell anomaly that has the potential to regenerate dead tissue. Unable to conduct legal human trials, the researchers turn to corpses to test their serum.

As I looked at the title of this film I thought to myself “Oh crap, my editor just sent me another dud”. I mean really…”The Frankenstein Syndrome”? It just sounds cheesy…super duper cheesy actually. Let me take this moment to apologize to him for all of the bad thoughts that were going through my brain as I started watching it. I was pleasantly surprised by what this film delivered.

Tiffany Shepis plays Dr. Elizabeth Barnes, a brilliant research specialist who is drafted by Dr. Walton (Ed Lauter) to help a team of others in trying to discover a cure for his cancer through stem cell research. The name of the project? Prometheus. Although all of the members of the team are specialists in what they do, they haven’t been able to crack the problem presented to them. But Barnes does manage to find a breakthrough that manages to re-animate a human heart without the use of electrical stimulation. I know that sounds silly but it’s a movie, not a lesson in anatomy. The stem cells that are used are extracted from the wombs of artificially inseminated women who are mostly drug addicts or homeless & the cruel procedure has to be performed without anesthesia as well. Why? Well, besides the fact that the women won’t be missed the film doesn’t describe why the procedure has to be performed in such a forceful manner. But it is an interesting conceit anyway.

One of the donors (who by the way are kept captive in the research facility) kills herself eventually because she feels like she is going to be killed anyway & thinks what she is being forced to do is wrong. So what to do? Test the serum on her..that’s what! So the team does & promptly get a voracious zombie like being for their trouble. The director of the group, Marcus (Louis Mandylor), upon seeing the results of the first human trial promptly puts a bullet in her head. Done deal, on to the next one. The next one is a security guard named David who is also shot by Marcus (don’t ask). When he is given the serum he comes to life but initially seems to have regressed into an infantile state of being, forgetting how to eat & read. He is slowly nurtured along by Dr. Travelle, who initially butts heads with Dr. Barnes but eventually reach a tense agreement to work together. Travelle takes on a motherly role in dealing with David, slowly bringing him along & slowly answering all of his questions. Questions like “How did I die”? His naivete is endearing to her but eventually she becomes frightened with how quickly he is learning & some abilities he has acquired that aren’t quite “Human” and pose a threat to everyone in the facility.

“The Frankenstein Syndrome” sounds like a silly title for what seems to be a “Re-Animator” ripoff but in actuality it fits perfectly. The researchers have created life from death, and much like Dr. Frankenstein way back when, are at a loss with what to do with their subject when it becomes unmanageable. There is a tenuous link that the film tries to make between the reanimation of David & the possible creation of a deity. You see, as David begins to grow stronger both mentally & physically, he develops the power to read minds & shockingly he can turn water into wine. Who else could do that….I wonder? He also is extremely violent as well. His new abilities hurt him as well & he channels his pain through killing others.

The film has a notion that it’s something of a new “Frankenstein” & it’s actually not too far off of the mark. The added religious aspect (have they created a Christ like being)? only adds to the mystery. The script is a lot smarter than the title lets on. It’s intelligent & demands the audience to think about the bigger picture. Not what I expected from it at all & I was pleased as punch by it. That’s not too say the film is perfect though, some of the acting is weak & there isn’t a lot of gore to be found but there are some interesting kills that take place offscreen mostly. There is one kill in which David rips a doctors head in two by grabbing his jaws and pulling, we don’t see the kill but we HEAR the victim’s gurgles as he dies & blood spatters over David’s face. It’s a very potent scene & the sound really sells it. There is also the fact that this is a low budget film so a lot of the sets look like they were shot in someone’s living room/kitchen/basement. But none of these are deal breakers in my eyes because of the sincere attempt by director/screenwriter Sean Tretta to make a film that asks questions of it’s audience. I don’t see a lot of that in low budget films nowadays.

I also have to give credit to Tiffany Shepis. She has been getting dirty in the trenches of low budget filmmaking for a long while. But she hasn’t just been going through the motions…she’s been getting better. Better as an actress & her name is listed as one of the producers as well so she’s been busy bettering herself as an actress & behind the scenes as well. The sky’s the limit for her now in my opinion. Now she just needs one big break to get her out of the low budget films she’s cut her teeth on & into the big studio film market.

The film begins & ends with Dr. Barnes being interviewed by a an “Agent Wollstonecraft” (a clever reference to Mary Shelley who wrote the original story, she actually gets a screenplay credit as well). She is wheeled into the room with a plastic mask over her face, how did she end up this way? You’ll have to see the movie to find out but I had a blast doing so & I think you will too. The Black Saint is giving “The Frankenstein Syndrome” three shrouds for it’s intelligent script & being a lot better than it’s box art makes it out to be. On a sad note, there is a “In Tribute To” credit after the end credits finish rolling to actor Noah Todd who had passed away last month. He plays Dr. Ira Gorman, the doc who gets his jaw ripped open. I know I might’ve trivialized the scene earlier but in it’s entirety the scene is actually very powerful & Todd’s acting is exemplary in it. Condolences from everyone here at Horrornews.net to his family & friends.