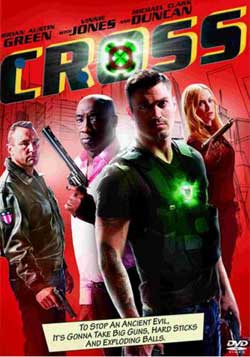 Given incredible power by an ancient Celtic Cross. Callan continues to fight evil… Now, joined by a team of weapons experts, Callan battles an unstoppable empire in Los Angeles.

Cross is a superhero movie in disguise. I don’t remember reading about it or seeing the comic book in the stores but as it stands it is focused around a warrior named Callan (Brian Austin Green) who possesses a Celtic cross that giving him superhuman abilities. Bullets pass thru him while emitting a green aura suggesting his almost invincibility. He also is able to emit a pulse weapon charge from his body. Now with that being said it almost sounds a bit like Green Lantern but not quite. I  got a slight inkling that this was either a Christian movie or maybe just Christian influenced, though it did have racy enough moments that made me believe that it was only a element of the superhero. Callan seems to be about getting the bad guys with occasional mentions of being God’s warrior. But don’t let any of that deter you, this is still a pretty cool film and I for one love superhero films.

Callan is not alone, by a long shot. He is surrounded by a huge army of weapons experts and fighting specialists. Each of course has a slightly different focus or expertise for that matter as each is called out on the screen old school style stating their name and area of experience. There were too many to process all at once but the lineup goes something like this Jake, Gunnar, Poison, Greek, Saw, Backfire and …..well you get the point.

The movies is chock full of actors. Brian Austin Green plays Callan. Jake Busey plays the comic relief explosive-throwing Backfire. Tom Sizemore is the detective trying to put the pieces together and C. Thomas Howell plays bartender Jake. Though there is a mistake in the listed IMDB credits for this film, as Rachel Miner is listed as playing Poison though is no where to be found in the film. So those buying purely on fan fare, take note.

From the get go the title credits are presented in comic books style giving us a quick prelude into the world of Cross. We are told time and time again that Cross and his band of weapon experts are out to stop bad guys. What this means is alot of shooting, bomb throwing and lair invading. Vinnie Jones as Gunnar has an agenda that has him collecting the bloodlines of a few chosen few who gives his staff the power to rule the world. Though Gunnar also has a death wish that has kept him from dying and cursed with being the last man on earth. THis is enough of a motivation to capture Callan’s girlfriend, and lure the team to Erik’s (Michael Clarke Duncan ) lair for a showdown.

OK, now the skinny. If you are a fan of X-men, Fantastic Four or otherwise, you’ll might have soft spot for this film. It is not to the level of fx that other superhero movies are but it’s somewhere between an action adventure and the TV show “Heroes”. The movie moves well thru action shootouts and battles that have each other invading lairs, rescuing dames and trying to win the battle of good and evil. Ya, a pretty common theme in superhero films. Though now to think of it, maybe it’s more of an A-team type style. In any case, it moves pretty well and seems to fuel one scene into the next with plenty of action. There are some holes that don’t’ make sense in the movie and the ending just felt a bit of a let down. With flaws and some confusion, I have to say I still enjoyed it and liked the action aspect of it.In any case, you might just dig it.