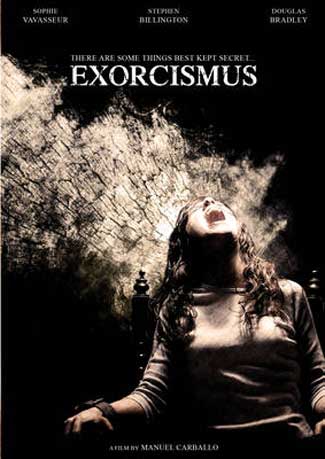 A family allows their young daughter’s exorcism to be recorded secretly.

You know acolytes, I think I’ve made it clear in the past that if there is one thing The Black Saint doesn’t like to watch are films that deal with Satanic possessions. Ever since the summer of 73′ when I first viewed “The Exorcist” (the only time I’ve seen it, I might add) I have avoided films of this ilk. Some scars are too deep to keep reopening them, you know what I mean? But lo and behold, I get a request from my ever so thoughtful editor to review a film called “Exorcismus”. Hmmm, I wonder what that could be about? Might it be about (as SNL’s Church Lady might say) SATAN? Yup, it’s another film about a young girl who is possessed by Satan (how come Satan never goes after young boys? Just wondering…)

Hollywood has always tried to recreate the success of the original “Exorcist” films. There were two sequels to the original as we all know, one execrable & one pretty good. There were the “Omen” films, which started out straight up amazing but due to seemingly endless sequels (both theatrical & on television) lost much of the originals luster. And then there were the Italian films, oh so many Italian knockoffs…far too many to mention. Some effective (The Tempter, Beyond The Door), Some crappy (The Sexorcist, The Night Child). There were also a spate of Spanish ones as well. But whether good or bad, they were all derivative & offered nothing new to the genre.

Over the last few years, Hollywood has been releasing one of these “Exorcist” type films with some success. “The Exorcism Of Emily Rose”, “The Last Exorcism” & “The Rite” have graced the big screen as of late & save for “The Rite”, have been very successful. Again, save for “The Last Exorcism”, none of these added anything particularly different or special to the genre. But they did do a good job of aping “The Exorcist” to varying degrees. So now Spain decides to dip their toes in the water with “Exorcismus” which was actually titled “The Possession of Emma Evans” overseas. Why it was retitled “Exorcismus” here is blatantly obvious. But if the production company (Filmax) wanted to get people to see this film, couldn’t they try a little bit of originality while working on a title? What the f*ck does “Exorcismus” mean anyway?

Oh, I forgot! I’m supposed to tell you about this movie aren’t I? OK…A young girl in England starts acting strangely. The film opens with Emma (Sophie Vavasseur) standing over her bathroom sink & slicing her palm with a piece of a mirror she broke on the floor. From then on, she just gets odder & odder. She begins to act strangely around her family for no rhyme or reason. She tries to drown her brother in a bathtub, pour a pot of boiling water on her mom, make passes at her best friend & then mock her as a lesbian. You know, some good clean fun! She also has visions of bugs (especially Cockroaches) sprouting forth from her toilet, her pain killer bottle, her friends face (which leads to an auto accident). I’m mentioning all of this to illustrate the fact that there really isn’t much here that we haven’t seen before.

Emma’s uncle, Christopher just happens to be a priest who was investigated in the past for having a young girl die while he was performing an exorcism on her. Eventually her parents decide to enlist him in helping Emma. The church was not happy with the bad publicity that Christopher garnered with his previous attempt at exorcism so he has to perform the ritual without their knowing about it. But Christopher has ulterior motives in wanting to help his niece & he is willing to pay any price to get what he needs. Her parents, John & Lucy, are initially skeptical until during one of Emma’s fits, she actually levitates in the air. That’s when they decide to go ahead with the ritual.

Ok, so what’s wrong with this movie? The acting is fine, it’s nice to look at & has a nice twist at the end concerning Christopher’s true reason for performing the exorcism. The problem is one that plagues a lot of genre films but not in films of this ilk. That being that people just do stupid things in the movie in order to further the plot along. For instance, if your kid is levitating, puking up Black bile, cursing at her parents in a demonic voice at the dinner table, etc…would you let her go out & hang with her friends as if nothings wrong? Why wouldn’t be in a hospital or a mental institution or someplace like that? There is a scene where her parents take her to a therapist & during their initial session, she says something to him in a demonic voice & he dies from a heart attack on the spot. Why wouldn’t her parents be at least a little more leery of her afterwards? I didn’t get it & found it very stupid indeed. In addition to this, although there are scenes of the exorcism where she rolls her eyes up in her head as she’s tied to a chair & spouts some demonic nonsense in a creepy voice, she isn’t very scary. Not in the slightest. I was actually disappointed, I was hoping to be scared a bit. I avoid films like this one for a reason people. So if I have to watch one then I expect to be frightened by it…plain & simple. “Exorcismus” just isn’t scary. It does have a bit of atmosphere working in it’s favor but it just ain’t enough to make it any more than a better than average TV movie.

Doug “Pinhead” Bradley has a nice extended cameo as Father Ennis in it though. It’s always a pleasure to see an actor of his caliber in any film & he immediately adds some gravitas to his few scenes. But he doesn’t make it any scarier though. The score by Zacarías M. de la Rivais effective as well. It goes from blaring horns to what sounded like a toy piano without a hitch…almost ergonomically. It’s the best thing about the movie actually. Strangely enough, although the film is a Spanish production, it was filmed in England with English actors. Not that there’s anything wrong with that, I just found it odd. Perhaps the producers did not want to let on it was a Spanish film so it could succeed in other countries. But if that’s so, then they blew that too because all of the technical credits are handled by Spaniards & they’re all there in the credits. Director Manuel Carballo does a serviceable job but the script by David Munoz hampers any attempt to make something scary happen on screen. It’s just not frightening at all.

All in all, “Exorcismus” gets 1 1/2 Shrouds from your favorite Saint. It looks good & is well acted with a nice score underneath it all but it doesn’t set out what it attempts to achieve. It didn’t scare me…and I wanted to be scared. If you are a completist, then by all means indulge yourself & give it a shot. Me? I’ll just chalk it up to another attempt to get under my skin by my editor that failed miserably (Keep trying editor o’ mine) and move on to the next film on my list. Hopefully it’ll be a great deal better than “Exorcismus”. Until next time acolytes…The Black Saint has left the building.