SAVE THE SPACE FOR GRINDHOUSE 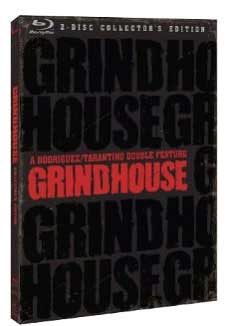 UNIVERSAL CITY, CA – An exhilarating homage to the titillating B-movies of the 60s and 70s, GRINDHOUSE, a double billing featuring Academy Award® winner Quentin Tarantino’ Death Proof and Robert Rodriguez’ Planet Terror burst onto two-disc Blu-Ray on October 5 from Vivendi Entertainment and The Weinstein Company. Debuting for the first time in high definition and in its original theatrical exhibition format, the presentation starts with the deliciously over-the-top horror flick Planet Terror, followed by an intermission featuring three gritty trailers and concluding with the ultra-intense vehicular slasher film Death Proof. The set features over two hours of brand new bonus material including a 10 Minute Cooking School feature with Rodriguez, five features on the trailers including an extended trailer and making-ofs, deleted scenes and much more.

“A total blast – funny, gloriously gory and over the top” (Associated Press), Planet Terror stars Rose McGowan (“Charmed,” Scream, The Black Dahlia) and Freddy Rodriguez (Bobby, “Six Feet Under”) as go-go girl-turned-vigilante Cherry Darling and one-man wrecking crew El Wray, as they try to save the world from a horde of flesh-eating zombies. “A movie that knows, at long last, how to put the bad back in badass.” (Entertainment Weekly), Death Proof stars Kurt Russell (Poseidon, Escape From New York) as a deranged stuntman turned psycho serial killer who stalks his victims from behind the wheel of a roving, revving, racing death machine, but when he picks on the wrong group of badass babes, all bets are off in this high speed vehicular duel of epic proportions. The two-disc GRINDHOUSE Blu-ray will be available for the suggested retail price of $39.95. 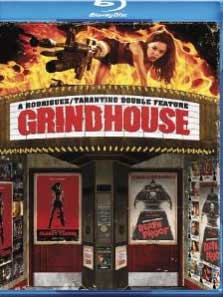 Synopsis:
Planet Terror – Married doctors William and Dakota Block (Brolin and Shelton) find their graveyard shift inundated with townspeople ravaged by gangrenous sores and a suspiciously vacant look in their eyes. Among the wounded is Cherry (Rose McGowan), a go-go dancer whose leg was ripped from her body during a roadside attack. Wray (Freddy Rodriguez), her former significant other, is at her side and watching her back. Cherry may be down, but she hasn’t danced her last number. As the invalids quickly become enraged aggressors, Cherry and Wray lead a team of accidental warriors into the night, hurtling towards a destiny that will leave millions infected, countless dead, and a lucky few struggling to find the last safe corner of PLANET TERROR.

Death Proof – A creepy stunt driver whose taste for stalking lovely young ladies gets him into big trouble when he tangles with the wrong gang of badass babes. Their confrontation escalates to an extended mano-a-mano car chase with one of the girls strapped to the hood of a thundering Dodge Challenger.