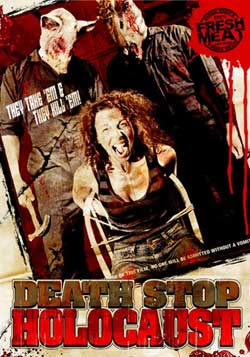 Two young women, Elizabeth and Taylor, travel to their father’s summer home on a remote island for a vacation getaway. As they travel deeper into the island, a nightmare begins to unfold. An unmarked white van will not leave them be, as they begin to sink deeper into terror. It becomes clear to the women they are not welcome as a group of masked killers begin to torment, torture, and hack them to bits.

Definition of the word “Grindhouse”: A grindhouse is an American term for a theater that mainly shows exploitation films. It is named after the defunct burlesque theaters located on 42nd Street in New York City, where ‘bump n’ grind’ dancing and striptease were featured. I wanted to look that up as soon as I was finished watching “Death Stop Holocaust“, a film that wants to present itself as being grindhouse but falls short due to some curious choices made by the filmmakers. And as someone who spent a lot of time in the grindhouses of 42nd street from the 70’s till they were all torn down & “Disney-fied” in the early 90’s, The Black Saint knows from whence he speaks when he uses the term “Grindhouse”. 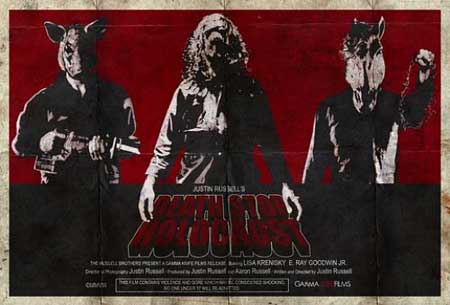 In this one we find two young women, Elizabeth (Lisa Kreninsky) & Taylor (Jenna Fournier) taking a trip to Elizabeth’s summer home for a little R & R. Things just don’t go right for them once they arrive on the island where the house is located though. Somebody tries to run them off the road in a van, they stop at a diner where the gas from their car is promptly siphoned off by some dude who looks like one of the musicians in Slipknot, They are promptly abducted by that same guy & two others wearing a pig head & a horse head where one of them is raped and beaten and the other gets her throat slit. This is all fairly standard for a grindhouse/slasher film except the town seems to be in on all of the shenanigans. 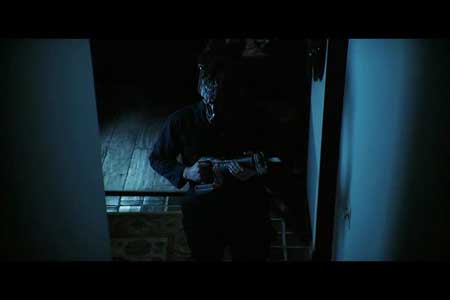 After the rape and throat slicing scenes are done Elizabeth is allowed to drag Taylor back to their car, and they head to the hospital where Elizabeth tries to tell the doctors that her friend is in the car bleeding to death but she is told to relax and is given a sedative. She has some terrible dreams of being in the forest at night with Taylor staring at her with glowing eyes and a pearly white smile as blood is running down her arms. She awakens to find herself in the hospital bed with no one else in the hospital to be found. No one except one of those pig headed dudes & a pissed off looking nurse anyway. And from here it gets really weird… 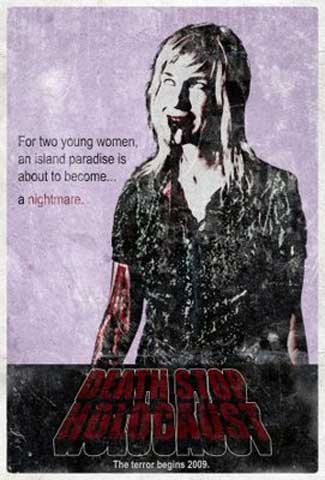 I’m not too sure what director/writer Justin Russell was shooting for here. After what I just described the film plays like a series of dream sequences that are interrupted by scenes of lucidity where we find Elizabeth contacting her dad trying to get some help. Sadly none of these sequences fit together very neatly and mostly serve to confuse the viewer. That being said, the film managed to maintain my interest just because I was wondering what the hell was gonna happen next? At times I felt I was watching a slasher film directed by David Lynch (Which I mean as a compliment). There is a constant state of unease that permeates the movie which kept me on edge, almost as if I’d never seen a horror film before.

The music in the film helped me to understand where Russell got some of his influences from. The soundtrack is credited to “Gremlin” which sounds a lot like “Goblin” to me. Goblin being the house band for some of the more seminal Italian gruefests during their glory days. It’s also a very effective soundtrack as well, adding an underlying layer of suspense to the on screen mayhem. The actors are all very well cast (Fournier is a dead ringer for Reese Witherspoon) and they all do the odd script justice. There isn’t a lot of blood to be found here despite the title (Which makes no sense by the way) but when it arrives it’s enough to satisfy all but the hardest of the hardcore.

But I have to get back to the term “Grindhouse” now. The film begins with the customary “Our Feature Presentation” grindhouse/drive in introduction screen which to me is a bad sign as I get the impression the film makers were going to try too hard to make a real grindhouse type of film. That feeling only got worse as the opening credits rolled and I saw all of the film dirt, speckles & heard the soundtrack pops that were some of the more memorable aspects of going to the movies in the 70’s-80’s, when people used to make movies with real film stock. Afterwards the film becomes pristine to look at since it was obviously shot with a digital camcorder with all of the film stock effects added later. There are also a few moments of film burn in the movie where the film is seemingly burned by the heat of the projectors light bulb. These moments are strategically placed and when the film returns, we find the girls (& ourselves) in a different place with little to no explanation as to how they got there. I respect the reverence that young film makers have in wanting to pay homage to films that influenced them but the whole grindhouse thing has gotten out of hand. Just because you can make a film look and sound like a grindhouse film doesn’t mean you should. Just make the damn movie!

Eventually, Elizabeth’s dad makes it to the island to rescue his daughter but it gets even stranger from that point on, stranger & more obtuse in fact. I daresay that the direction the film heads in is bold & daring given what I was expecting to watch but ultimately I can’t because it’s just too f*cking weird. Suffice it to say that the ending was vaguely reminiscent of “The Blair Witch Project” to these tired eyes but I think you all might see it in a completely different way. And that is a good thing as this film will create some debate among those who have seen it. It’s an odd amalgam of homages that doesn’t really work as a whole (That ending…) but if watched & rewatched over time I think “Death Stop Holocaust” might find some supporters. Hell, I liked it and I’m still not too sure what the f*ck was happening! Three shrouds for “Death Stop Holocaust”, a film that isn’t anything you expected it to be at first look but given a chance (& some time to figure it out), you might just find yourself with something good to tell your friends about.